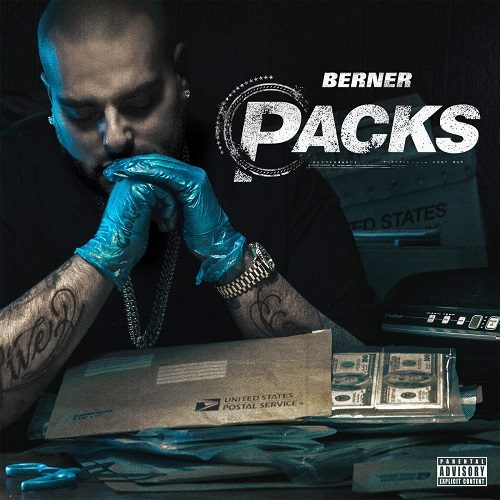 So this Berner guy. He has this gimmick. The world of narcotics inspires his discography. His album name generator is set to ‘Album Titles That Make You Come Across Like A Drug Lord. Creativity Level: Basic.’ Now we would be remiss to not mention that Berner is also, in not fully transparent ways, involved in the lucrative business of medical marijuana. What is established is that he has experience in the growing and selling and particularly the marketing of cannabis and related products (including, ultimately, his music). So when he baptizes his projects “Hempire,” “Urban Farmer” or “Harvest Season,” there’s no denying a real-life relevance where Berner’s music reconciles his bohemian (rapper) with his bourgeois side (one-time farmer/pharmacist, lately more universally hemp entrepreneur and emissary). What then are we to make of the following titles: “Border Wars,” “The White Album,” “BLOW,” “Traffic,” “Drugstore Cowboy”? They insinuate that Berner aims higher in the the drug trade than having stakes in a couple of dispensaries, being partially responsible for popularizing the dominant Girl Scout Cookies strain and running the complimentary Cookies clothing line.

To assume that Berner has ever been heavy in that other game would of course be totally surreal. He appears to run a fully legal business to great success and has no reason to mess with hard drugs. Remember, we’re in the wonderland of rap where you can be whatever you want to be. Berner simply knows how to brand himself, and if he desires to extend his image beyond weed rapper, he’s free to do so. (“I went from coke money to hoe money, grow money to show money to Hemp2o money,” he boasts at one point.) “Prohibition” (another album title) is a reality in both fields (with interesting historical nuances), and while a “Drought Season” (yet another title) doesn’t necessarily mean the same thing in the cocaine and in the cannabis business, it plays a role in both.

These “Packs” then may contain any kind of contraband, it doesn’t really matter, Berner has been your pusher in various constellations and collaborations for the last decade. Though this one is a solo album from a rap artist who just as much likes to share the billing, notably with bigger names like The Jacka or B-Real. “Packs” benefits from Berner’s competent musical taste and his numerous connections, resulting in another individually solid entry in the San Francisco representative’s discography.

Considering his online stats, there has to be something to Berner that continually attracts people to his music. One factor is certainly that he keeps his sound up to date. Another might be that he’s an all around inoffensive chap. He raps unagitatedly, with the same pitch and pace, without unnecessary drama – and probably couldn’t rap differently even if he wanted to. His personal comfort zone happens to be sonically comforting for the listener, his flow dabbling in a soft-spoken voice that would be just as fit for telling bedtime stories. Which is a characteristic he shares with a considerable number of contemporary rappers, and while that should be a fundamental concern to the greater rap audience, Bern gets a pass because he kinda sorta makes it work. Plus everybody realizes that the artform is not missing out on a great MC in his case.

So it’s hard to hate on Berner. He does his little thing, not too glamorous, not too daunting drug music, and while he won’t ever reach the depth of the late great Jacka (with whom he put out three volumes of “Drought Season,” nonetheless), he infuses his work with a reflective tone, track after track. He found likeminded weed rollers and mic holders in Wiz Khalifa’s Taylor Gang, a helpful connect outside of his home territory. The Taylor Gang leader makes three appearances on “Packs,” including the dreamy, breezy Cozmo-produced “In the Mix,” which despite keeping a low profile boasts an incredibly rich instrumentation, and Cyfyre’s “Slow Down,” which is emblematic of contemporary hip-hop’s rediscovering of classy drum sounds and the resurgence of sped-up – but additionally filtered – vocal samples. Sacramento’s Mozzy is of a decidedly higher caliber, but Berner still is at eye level with him on “20K,” simply because the track makes that effort to be a real duet that most rap collabos don’t.

But Berner does also well by himself. A French Montana hook always works in this context (“Clockin”), and the way “Niice” touches down in Houston and Atlanta with Paul Wall and Quavo features (notably the first singing part on the album at track 7) is a nice touch, yet elsewhere Berner proves he can also be a self-sufficient solo entertainer. The opening “Halfway,” a combination of spheric sounds and sleepy vocals, scores with catchy inflections and its focus on the hook. Traxx F.D.R.’s pop trap for “Float” matches the “I’m high in my own world” mood of the track. Kev Knocks hooks “Problems” up with a Cassidy sample, an opportunity for Bern to gradually advance his statements into the realm of more general interest:

“I’m tryina vibe on a island and my phone ringin’
Fuck your problems, I’m tryina fight my own demons
I wish we all had it good, but we don’t
So go and do something on your own”

Although Berner’s philosophy fits on a coffee mug, he’s able to deliver songs that are in all aspects coherent. When combined with a degree of honesty and insight, his musings can make quite some sense, inside or outside of his world. “Addict” makes the simple case that the rapper is “addicted to the game,” and he makes that case without a lot of commotion but with a broad way of thinking that touches on various street rap tropes and also includes a nod to the progenitors of pot culture in Cali, the flower children:

“I used to cut the white, yeah, I played with the cris’
It’s the Bay in me, I still break a bitch
I’m a Frisco cat, I would die for my city
I made that Girl Scout and the Pie in my city
The Y get me dizzy, I get high with the hippies
Acid drops on my tongue like I’m in the sixties
We be really outside, if they tryin’ to hit me
They gon’ get shot at, I hope they all die with me”

With his basic lyrical and intellectual configuration, Bern hits the proverbial wall relatively quickly. There’s nothing remotely menacing about his delivery, and whenever street credentials come into the picture, it’s particularly hard to take him seriously. He’s better off playing the smooth criminal role, as he wisely does most of the time. Also the personal moments remain mostly impersonal (“Fork in the Road”), by the greater genre’s standards at least. It invariably comes back to Berner needing to stick to his guns – subtle affirmations of baller status over velvety, hazy production – a Bay Area specialty, by the way. For all I care also with cheesier ’80s borrowings (2Tall & Andrew Drucker’s “Addict” and Kev Knocks’ “T.K.I.L.”). It’s undeniable that providing a smooth, stable ride is what Bern has put himself on the rap map for. Within these confines he’d do well to experiment not only by the last track like on “Packs” (the irresistible Scoop DeVille-produced “Strains”).

The cannabis portal Leafly characterizes the Girl Scout Cookies strain as follows: its general effects peak on Happy and Relaxed, but bump only halfway towards Creative. SFWeekly meanwhile points out that other strain names like O.G. Kush, Trainwreck and Green Crack ‘all send the wrong message. But Cookies is friendly, easy to digest.’ Arguably I’m combing the net for quotes to fit an argument here, but with reference to his music, it’s no wonder Berner is a brand ambassador for Girl Scout Cookies.