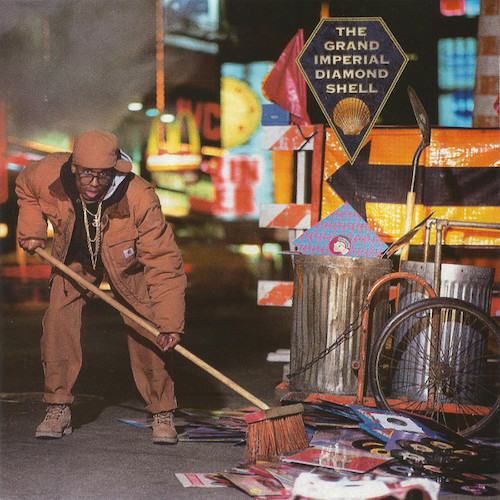 God bless the dead, but I don’t think you have to listen to “Oh What a Night” twice to know that Biz Markie was not a good singer. That was part of the charm of hit singles like “Just a Friend,” sure, but was it really the right way to introduce “The Grand Imperial Diamond Shell” to the world?

I will make the argument it wasn’t simply because there’s no record of Diamond Shell nor his career to be found. He has no Wikipedia page, his album hasn’t been digitized for re-sale, and his entire career is summed up by this one album and this one single on Discogs. They also note the one thing you can learn from this song — he’s the brother of Biz. I’m sure he misses his sibling greatly right now, but in the second verse he sounded more annoyed than pleased by his brother’s fame and fortune.

“Now on Sunday, some rest, they sit around and they bored
But some get dressed up and go to the house of the Lord
Now me I’m at the mall and yo y’all know how that is
Crowds of people is out there sweatin me cuz my brother is Biz
People ask me questions like, ‘Hey Shell, where is the Biz?’
I say – it wasn’t my turn to watch him, I don’t know where he is
And hey – I’m not his father, and Biz ain’t got no keeper
If you want to find the Biz Markie then try usin his beeper
‘Suppose he doesn’t call us back, where can we reach the B?’
Try 1-900-The-BIZ-MARKIE”

Back in the day I was annoyed by the third verse of the song, because I expected some sort of comical twist by Shell being promised a “special treat” by his date, and instead she “did that nasty thing” with no kind of swerve at all. In fact aside from griping about people jocking him because his brother is famous, the entire song is about how many girls Diamond Shell can lay. Maybe it’s not so bad being Biz Markie’s brother after all.

In fact it seems like the entire marketing plan for “The Grand Imperial Diamond Shell” hinged on the idea that Shell was Biz Markie’s brother. Cold Chillin’ Records expected the album to fly out of stores for no other reason than that people loved The Biz, so they’d love the rest of his family. Unfortunately this left songs like the Herbie Hancock sampling “Captain Speaking” literally chilling. It’s a super mellow slow rolling head nodder and Shell is a perfectly capable rapper. In fact (again I mean no disrespect to the dead) he’s probably the better emcee of the two.

I don’t make that statement lightly. I realize Biz was a fountain of charisma, an amazing beatboxer, and his ridiculous warbling was charming in a way no other bad singer could ever be. When it comes to constructive a tight narrative, Shell may have only had one album to show off his skills, but with songs like “Rock On” he certainly made the most of it.

“I was walkin down the street a brother bumped me
A really bad way to confront me
So I glared at him he got pissed
He stepped back and started flingin his fists
So I dodged to the left and then went for mine
Reached in my camouflage, and pulled out my nine
.. then Hobbes took a chill
I said, ‘Freeze black, and stand still
Don’t make me do you in the street because I will’
Yo so, at that note he stood still
.. he had his hands up
I coulda killed him but I didn’t that’s just his luck
I said, ‘Yo, you got til ten
So turn slow like and start steppin’
So he did as I said, so slow he turned
He took off so fast I smelled the sneakers burn
But the smell from the smoke was his brain
.. in which I branded my name
I am the Diamond Shell, I rock on”

Some people use the terms “slept on” or “hidden gem” so casually that the significance has all but eroded. If everything is a hidden gem, then is anything truly hidden? “The Grand Imperial Diamond Shell” deserves the title though because this album is truly lost to time. Were it not for the fact someone uploaded it to YouTube of their own accord, it would have vanished from the public eye completely. It almost feels like Cold Chillin’ just reluctantly did Biz a favor. “Yo — we’ll put your brother on, but you have to record a few cameos and appear in the video to promote it.” Once that was done they washed their hands of the whole thing, and although this phrase is overused too, Diamond Shell truly did deserve better.