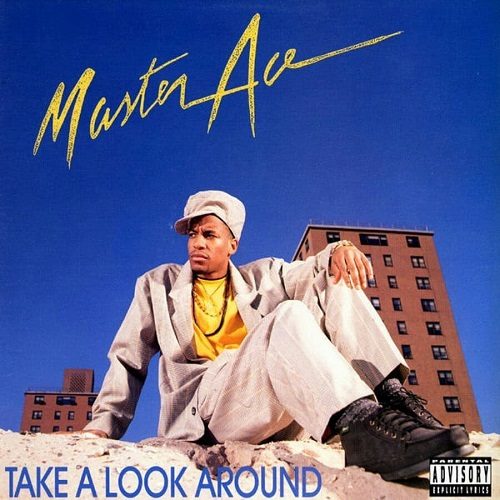 Take a Look Around

Master Ace :: Take a Look Around

“I’m here to reach the youth
The only way that I can do that is to teach the truth, so I do
Some used to diss and dismiss this
But then many of those small minds grew, to understand
the mission of the Music Man
I know the time, and I clock dough so I’m grand
But I’m not a father, no I’m more like the sun
Shinin down on every single one
So run, run and tell ’em all, yell it from a wall
The Music Man will never fall
or fail, raps tip the scale to get you hot and
I wear cotton, I don’t bail
or pick, but I like to kick – raps
Haps, you have none – so quit!”

Weekly readers may have noticed your humble author has been in a nostalgic mood of late, dating back to when I reviewed the debut Leaders of the New School release in May. The recent buzz about the MA DOOM

album got me nostalgic again for another hip-hop album I was quite fond of in high school – “Take a Look Around” by Master Ace. At this early point in his career, he hadn’t made the decision to stylize his name and drop the “-er” for the only slightly shorter “Masta” spelling. It’s not hard to tell they’re the same person though, given that the Brownsville resident’s accent and vocal tone have remained remarkably unchanged through a hip-hop career now spanning four different decades. Ponder how many musicians in ANY genre you can say that about for a moment while I hit you with another favorite song off this album – “Can’t Stop the Bumrush”:

“Strike up the band and hear the plan
of the Master man as I stand and cast a
shadow on MC’s, you’re small like fleas
Can’t get with these rhymes, so please!
Step back, no need to act
Retarted, cause once I get started the impact
is thorough – Brooklyn is the borough
Find a fly cutie and squeeze all over her, oh
snap, she tried slappin, then guess what happened
Jumped all on it when she saw me rappin
And rockin, G’s I’m clockin, knees I’m knockin
Ease, freeze, put a sock in your rap
cause you ain’t crap, talkin ’bout your dap
Yellin and swellin when you really need a slap
to the grill, yo, you better chill
Rhymes start to pour, you don’t need a refill
Will, you ever sweeten up your skill?
Your rhymes are sour like dill – ill!”

This album came along at a perfect time in hip-hop before the media vultures descended on rap samples and ripped the classic funk right out of the culture. Marley Marl’s fearless sampling for the majority of this album, and Mister Cee’s sampling on the rest, result in songs which stand the test of time both musically and lyrically. One of the most famous of these breaks is Cymande’s “The Message,” which found its way onto the cult classic song “Me and The Biz.” To this day I’m not sure it’s well understood that Biz Markie is actually NOT on this song, because Ace did a passable imitation of his friend and labelmate’s hyperactive lyrical style, allegedly because Biz couldn’t make it to the studio for the ACTUAL recording session. I think those who have seen the associated music video probably get the gimmick though.

Ace’s album features some of the best known tropes of hip-hop music, from a time long before they had been beaten into the ground, like his horny horn soulful “As I Reminisce” posse track featuring his friends Ice U Rock and Uneek plus TWO classics samples – Kool & the Gang’s “N.T.” and “One Man Band (Plays All Alone)” by Monk Higgins. Then again you can’t swat a fly in this room and not hit a classic break. “Brooklyn Battles” lifts from “If You Let Me” by Eddie Kendricks, the title track samples from Gil Scott-Heron’s “The Revolution Will Not Be Televised” and “Letter to the Better” borrows from so many I’m NOT going to list them all – but James Brown and The Miracles are both in the mix.

“Allow me to begin, once again my friend
Yo, it’s Ace in action, here to send
any and all MC’s into a frenzy
Cause I’ll take a rapper out just like a Benzi
Yeah, this ain’t the same old, lame old
Braggin and naggin, yo all that became old
Years ago, and yo, here’s a pro-
fession that will better and freshen the soul
I am going on and on like an adventure
Some of y’all are off from that cause I sent ya
Hmmm, this move is forward, or would
You like it if I pause, yeah you sure would
But I ain’t pausin no stop just like a freeway
Rappers, you claim too close, I need some leeway
Cause it’s about time for, the party to get a
little bit hype and yo, this is a letter to the better”

Now clearly I’m enthusiastic about this album. Ace was a rapper who had my attention from the first time I heard him on “The Symphony” – he grabbed a hold of my soul and never let go. And given this album is now over 20 years old, I realize it’s going to sound incredibly dated to anybody who is currently under the age of 18. Let me offer you this perspective then: if you’ve heard any of his more recent albums like “Arts & Entertainment” and thought “Damn – who is this dude and how’d he get to be so good?” this is your answer – he pretty much was from the start. There have been a few times over the years here and there where he may have phoned it in just because the grind of the music industry got him down, but Ace is one of those quintessential rappers who by and large can sound good even on a bad day – and the recording sessions for this album were clearly not bad days for what was then a young and promising emcee.

The back cover of this album is an intriguing footnote to the story though, as Ace kneels on the beach, having just drawn his name in the sand with a stick. His gaze toward the ocean suggests he’s aware that time may wash away that impermenant mark he’s just left, and maybe he thought the record biz would do the same to him. The good news is that while the trends of the times have taken us away from this style of hip-hop, the music itself has not vanished like a footprint in the tide. You don’t have to look far when you “Take a Look Around” – this is a classic you can still enjoy although if you want a “like new” copy of this out of print record you’ll probably pay a premium. Is it worth it? ABSOLUTELY.