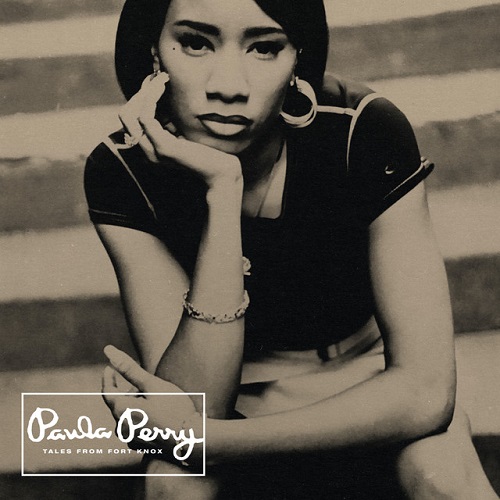 How could you get a rap album ready for 1998 and not release it? A DJBooth.net breakdown of platinum hip-hop albums revealed that no calendar year can claim more than the 30 platinum plaques handed out to hip-hop artists for their 1998 releases. To be fair, Paula Perry’s “Tales From Fort Knox” probably wouldn’t have been number 31 (or 1999’s number 30), despite the all-time probability. But it does play in the same league by virtue of factors such as infrastructure, personel and composition.

Paula Perry (real name, no gimmicks) first came to most heads’ attention as a member of Masta Ace Incorporated, an organization effort during a time when collectives had become in style again. Perry can be heard sparring with Masta Ace on “Who U Jackin’?” and other tracks on “SlaughtaHouse” and “Sittin’ on Chrome”. She made her solo debut with “Paula’s Jam” in ’96, which was picked up by PolyGram subsidiary Loose Cannon. By 1998 she had moved within the PolyGram conglomerate to Motown’s Mad Sounds Recordings. Her investors enabled guests like Brian McKnight and Kelly Price and producers like DJ Premier and Easy Mo Bee. But upon completion, only promo copies of the album were distributed, proper release formats finally pouring in in the 2020s.

The bigger budget behind this originally shelved album is felt in entertaining intro/outro segments that introduce us to Paula Perry in her habitat Fort Greene, Brooklyn. It also shows in the beat selection and song concepts. For what could have been, familiarize yourself with “Paula’s Jam”, a highly effective underground club jam put together by Masta Ace under his producer alias Ase One with elements from a Roberta Flack ballad. The hook, combined with a Mad Skillz sample, is essentially a neighborhood hypeman getting the local audience involved. Although there is some showing off on Paula’s part, ultimately she gives off the down-to-earth homegirl attitude that could be found in either Lil’ Kim or Heather B (to name two seeming opposites).

“I gets harder than a penis / Strokin’ / pokin’ / I got you open / Wet you up like some pussy that’s soakin’ / moist / Hear my voice” may not be the most ladylike introduction (considering the single printed by PolyGram reappropriated the Pierre Cardin logo), but in the big scheme of things it’s not completely out of character for female MC’s. It’s been said that rap was invented just to buck conventions, so there.

The problem with Paula Perry’s subsequent material is that it’s less edgy. She got it right with “Extra, Extra”, the album’s intended lead single (or street single) produced by Gang Starr’s DJ Premier. A rugged MC just to Primo’s liking, the self-appointed “queen of Fort Greene” leans comfortably into the beat that blares the news alert with bleeps and choppy bass bumps. Inspired by the credibility that a blessing from such a producer provides, she doesn’t hesitate to lay down the law: “Fort Knox, pay a fare when you’re comin’ through”.

Other tracks also display the ‘necessary roughness’ that the Lady of Rage had stipulated shortly before. Perry defends her personal space tooth and nail over Jesse West’s assorted breakbeats on “Mind Yourz”, even striking back by invading an adversary’s appartment in the last verse. This is the kind of tit-for-tat street rap that is part of such an album’s formula. A strong mixtape candidate, the musically smooth but lyrically unforgiving “N.V. in ‘Em” introduces local duo 4LB (Four-Pound Click) for a heated exchange on the topic of jealousy. (Curiously, one of the rappers seems to go by Jealousy. The other calls himself Larceny – no relation to the Junior M.A.F.I.A. member of the same name.)

If you ever came across the BUDS Distribution 12″ “Six-Pack”, you might have wondered if one of the six women was the posse cut’s initiator. Since the song is part of this album’s original tracklist, Paula Perry takes those credentials. Nevertheless they are all equal – fellow mic Amazons Bahamadia, Rah Digga and Heather B, dark horse Precious Paris – plus former Def Jam signee and early ’90s debutante Nikki D, who also provides background vocals on other tracks and was, according to the Loose Cannon press release-turned-Hip-Hop Enterprise liner notes, briefly in a group with Paula and Apache (of “Gangsta Bitch” fame). Not as star-studded, the overlooked “Six-Pack” still feels kin to King Tech & Sway’s “The Anthem”, not to mention other crucial late ’90s underground cyphers.

But the team behind “Tales From Fort Knox” also had their eyes on a different prize. Between ’96 and ’97 Perry’s people secured her mandatory guest spots on R&B songs (she even wound up rapping alongside Tina Turner on an official British remix). Even as the two R&B features never had the chance to prove themselves on radio or would have remained album cuts, they spell out ambition. Ultimately however it feels like boxes being ticked rather than blueprints being drawn. “Ghetto Vows” is passable thug-luv fare with Brian McKnight officiating the Bonnie and Clyde-themed duet between Paula and Q45 (her child’s father and also the producer of the track).

Kelly Price provides subtle assist on “I Wanna Be” but does get time to shine towards the end. The simple but solid song concept is fortified by the fact that the MC is searching for deeper fulfillment:

“I wanna be the greatest that ever lived like Ali
And never starvin’, B, honestly
I wanna be free from this mental slavery
I wanna be me, Paula P, with a sitcom on TV
I wanna be overseas, doin’ shows in Belize
I wanna smoke trees without the D’s wanna stop me
I wanna be Hot like 97 and not 97 niggas on my block”

More than Clark Kent’s beat pretending to belong to a Mase album, it’s hard to overlook Paula Perry wrestling with Biggie’s cadence without the necessary rhythmic suppleness. Speaking of, it’s only fair to compare artists when they are in a similar lane. Case in point: “I Remember”. There’s no doubt that ’80s Brooklyn deserves a nostalgic tribute. Like the whole of New York City, it provided hip-hop, last but not least the commercially successful variant (Big, Jay, Kim, Fox), with so much raw inspiration. Even when it clearly follows precedent and is weighed down by the (sampled) R&B overload, Paula Perry’s “I Remember” has every right to exist. But when you think of “Juicy” and how it was contrasted by “Things Done Changed”, the bar – not for “I Remember” the song but for Paula Perry the artist – is decidedly higher.

Things could be worse, and they are indeed in the case of “I’m Fuckin’ Wit U”. This is an absolute bummer of a wannabe bubbly club track starring and produced by Masta Ace and a guaranteed low point in the BK legend’s career. It’s hard not to take it as a parody, especially thinking back to the sly “SlaughtaHouse”. Perry should have saved the “Black feminist / on some terrorist shit” line for a more potent track. For a “hardcore rap lyricist” (“I Wanna Be”) such empty tunes are just a waste of time.

“Paula’s Jam” on the contrary still shines, with its anthemic beat that Roc-A-Fella Records would have welcomed with open arms. In contrast, another Ase One contribution, “Let Me Explain Somethin'”, clearly lacks the guidance a dope loop can provide. Their remaining collaboration, “Reasons” makes up for it with a reflective atmosphere foreshadowing Ace’s acclaimed “Disposable Arts” comeback.

Caught between different demands, “Tales From Fort Knox” is very much a product of its time. Freedom of choice was probably to some degree restricted to Paula Perry. (Yet somebody still greenlighted the geographical blunders of “West Headz”…) That’s how you end up with Jesse West (better known by his “Dolly My Baby (Bad Boy Mix)” alias 3rd Eye) delivering a Lost Boyz-style hook on “Down to Die For This”, while the real Mr. Cheeks is on “The B.Q.E.”, which is all right but one-dimensional in its dancefloor direction compared to an all-terrain jam like “Jeeps, Lex Coups, Bimaz & Benz”. But alas, during the late ’90s goldrush even trusted beatsmiths such as Clark Kent and D/R Period ventured into shallow musical territory.

In some ways, this retrospective review is proof that after ’97 these rap fans were damn hard to please. Looking back, without pretending that time has stood still, it’s refreshing to witness a woman at the center of a rap release who really focuses on rapping. And it’s interesting to hear the Lil’ Kim influences (via inflections) while the sexuality that was key to the former’s content and image is completely absent here. The downside is that across the whole project Perry’s performance lacks intensity. It’s true, to stand their ground, rappers don’t have to be up in arms all the time. That would have been one thing she learned from one of her idols, Rakim. So her calmness can be effective, see the low-key narration on the Domingo-produced intro where she pledges to “represent like Killer Ben and 50 Cent” (members of what is sometimes referred to as the Paid in Full Posse), both pictured on the back of Eric B. & Rakim’s “Paid in Full” LP.

Paula Perry seemingly had all the right connections – from Mister Cee to Masta Ace to Motown – and according to her still got double-crossed by those same connections. After the turn of the millennium, she was involved in Lil Mama’s career and she continues to drop music – in measured doses – to this day. Testament to a dedication to hip-hop alive in many artists from that era, not just the obvious survivors.