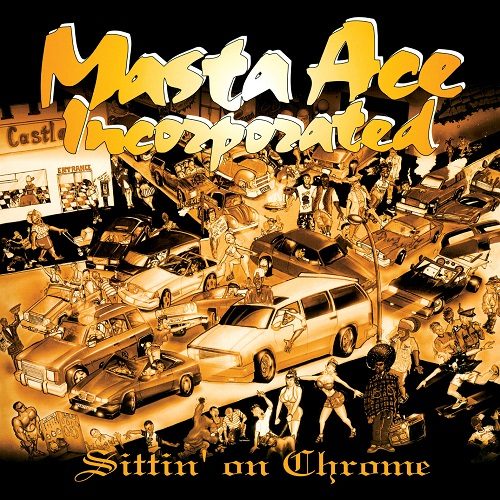 “Who is the crew comin thru with the A-C-E? The INC.” “Sittin’ on Chrome” is pregnant with sub-woofer busting “808 beats that hit Big like Kane.” Masta Ace dropped a stellar LP way back when hip hop was not found on Billboards and placards across the globe. Albums like this are few and far between. The concept behind this shit is entertaining and hilarious enough to keep you glued to your stereo even if you ain’t feelin it. No chance of that happenin though. As Ace puts it, “One fine spring, in the middle of May, my cousin Jerome flew in from LAâ€¦” Lord Digga flies in from the coast to NYC to spend a summer East coast style, and the result is a barrage of the ruggedest beats, ill vocals and a slice of the “Get ready” ghetto. After meeting up with his cousin, “that muthafucka Ace from Howard” meets up with two honeys before we lay back to the smoothed-out-Isley Brothers’ “For the Love of You” sample in “The I.N.C. Ride.”

“Eastbound” and some of the other tracks feature hardcore woman Paula Perry, and her female compatriot Leschea lending support to a variety of beats. If you then crank up the bass and turn off the treble, the Bluez Bruthas-produced “What’s Going On?” has Ace wondering just how lucky he is that the poverty pervading the streets of the Brook’ didn’t nab him. Then the unforgettable female voice from Eric Wright’s anthem is utilized in the hook of the title track. “He was once a dog from around the wayâ€¦..so you better take it Eazy â€“ and I’m sittin’ on chrome.” The 808 sound that made Ace famous is ever present on this thumper. “Turn It Up,” is an ode to the ladies with its “My Life” sample, while “The B-Side” pontificates on the ghetto politics of the era. These themes are toyed with throughout this astounding and slept-on disc. The Uneek-produced “People in My Hood” ponders whether the carnage, mistrust, deceit and backstabbing on the pavements and tenement buildings in the slums is justified. Later on with “U Cant Find Me” and “Ain’t No Game,” the mighty INC chills in a cipher bustin verbals laden with braggadocio, and both fit in quite tidily in this thematic “car-culture vibe” LP. It’s interesting to note that after Ace’s label lolly-gagged for eons; they magically grew gray matter and persuaded him to attempt to “cash in” on the fan appeal of the classic bass-shitter “Born To Roll.” As Ace put it, “I told them I’d make a theme album that gave them theirâ€¦vibe, but would still keep my creative integrity somewhat intact and still make it a dope album.” You ain’t gotta tell us man; we KNOW THIS SHIT. Some pundits have described the LPs brutally-amusing dialogue snippets as clips from the “ghetto Seinfeld,” where Digga assumes the role of the hapless Costanza. Take, for example, the pre-blind date “What the fuck she look like?” scenario or the “Did you see that last ham sandwich in the fridge?” debacle.

The Latifah-tinged “Freestyle” “ain’t off the top of the head” but remains to showcase Ace’s lyrical freestyle prowess for “those who know the real meaning:”

“Niggaz know my lyrical history, it’s no mys-tery
So I want this to be, understood
I burn more than Chuck D in Hollywood
And I probably should, say what I wanna say
Call me benchwarmer coz nigga I don’t play
When it comes to bass, I explode the planet, dammnit
And then +Jack+ more+ Sons+ than Janet
Anytime, Anyplace I burn like perms, germs
I’m damaging domes like ringworms
I rip Mikes from Jordan, Tyson to Irvin
Bolton to Keaton, Jackson I’m serving
suckers like a waiter so you better play the side and I’m
Deep like the dish in ya rims, and that’s the ride”

The Cella Dwellas foray onto the stage with “4 Da Mind” before Digga and Ace do their best “Operation Shock and Awe” impersonation with “Terror.” The Eric Idle sample is so naÃ¯ve that you almost don’t notice the beat when it kicks you in the teeth. Louie Vega’s “Phat Kat Ride” is a reprise of the first cut, and is drenched in hauntingly tasty horns and drums. Prior to that is the “bass drum jungle music” Ace has developed into a fine art. All the braniac dum-dums should peep the last verse:

“Black boy, black boy turn that shit down
You know that America don’t wanna hear the sound
Of the bass drum jungle music go back to Africa
Nigga I’ll arrest ya if ya holdin up trafffic
I’ll be damned if I listen, so cops save your breath and
Write another ticket if ya have any left and
I’m breakin ear drums while I’m breakin the law
I’m disturbin all the peace cause Sister Souljah said war
So catch me if ya can, if ya can here’s a donut
Cause once ya drive away, yo I’m gonna go nut
And turn it up to where it was before nice try
But ya can’t stop the power of the bass in ya eye
I wonder if I blasted a little Elvis Presley
Would they pull me over and attempt to arrest me
I really doubt doubt it, they probably start dancin
Jumpin on my tip and pissin in they pants and
Wigglin and jigglin and grabbin on they pelvis
But you know my name so you never hear no Elvis
Strictly the hardcore dirty street level hits
God’s on my side so watch what the devil gets
Positivity hittin 50 levels deep
Comin out, they comin out the woofers in my Jeep”

Suffice it to say that “Sittin’ on Chrome” was and always will be an essential addition to any CD/vinyl rack.