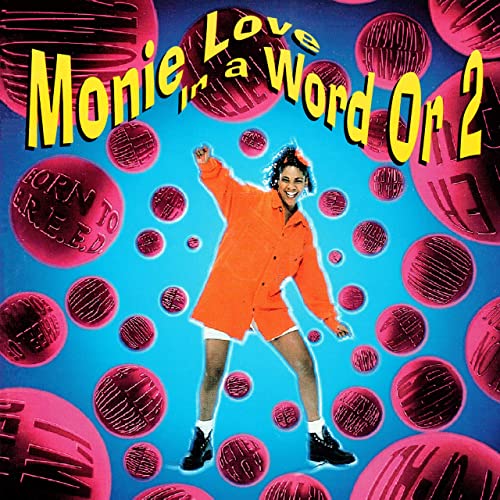 An alternative title for this review could be “Whatever happened to Monie Love?” The first time I heard her “Ladies First” duet with Queen Latifah I was convinced she was a rap superstar, and the success of her debut album “Down to Earth” a year later confirmed it. Three singles off that release hit the charts, and for years afterward rappers used “put me in the middle like Monie” punchlines, so it’s easy to see how influential it was. A follow up album seemed as guaranteed to succeed as any female rapper in the history of rap music to date, and after a three year delay “In a Word or 2” arrived.

The Marley Marl produced “Full Term Love” was definitely a start in the right direction. Sampling from The Fatback Band, Bobby Byrd and I-Level, he layered up a crossover friendly jam remarkably similar to his work for LL Cool J’s “Around the Way Girl” — and why not? If it worked once then it can work twice. Things get a little weird after that though. Prince (yes that Prince) produced the single “Born 2 B.R.E.E.D.” with the acronym standing for “Build Relationships where Education and Enlightenment Dominate.” Monie Love isn’t talking about relationships though — she’s literally talking about being “born to breed” and becoming a mother at a young age.

I feel like it’s going to be taken the wrong way if I don’t state plainly that I respect Monie Love as a mother as much as an emcee. She’s a proud black woman who puts her children first and wants her daughter to grow up to be smart and successful. She raps about the need for people to respect her choices, for her children to get the best education possible, and how it fulfills her to be a mother. Everything about this is right and exact — but did the listeners care about that? The reggae patois before the hook (which sounds like “born to BREAD“), the choir singing said hook, and the earnest sincerity from Love feel as cringe today as they did in ’93. Coming a year after “The Chronic” it seemed completely out of touch with rap’s new sound.

The title track of “In a Word or 2” actually makes matters WORSE. I’m sure it was a sign of her star power for Prince to produce tracks on her sophomore album, but this song would have been more appropriate on his own album. Her soft spoken delivery sounds like a straight up imitation of “I Need Love,” and the “ooh ee ooh ee ooh” crooning would have been better as backup singers for Mr. Nelson. Song after song feels out of touch or like it was meant for someone else. “Never Give Up” would be a better house song for Black Box. The horns and bass of “Greasy” and “4 Da Children” seem tailor made for Lords of the Underground (there’s that Marley Marl influence again). At least “Wheel of Fortune” fits Monie Love’s delivery. Stripped down to almost nothing but percussion, Monie’s bars hit hard.

It’s almost the quintessential opposite of “Sex U All,” a really bad pun on “sexual” with beats and rhymes that are ridiculously speedy. Monie is trying to tell a cinematic story but it feels like I’m listening on fast forward.

I’m not surprised that “In a Word or 2” was not just her sophomore album but her final album. Happily she went on to success in both terrestrial and satellite radio, and has raised four children I can only assume were instilled with the values of pride and resilience she preached on her records. It’s probably more of a reflection on me than her that this album disappointed me. I wanted so badly for hip-hop to have more female rappers as successful and well respected as Queen Latifah and MC Lyte that I placed unreasonably high expectations on Monie Love. Even if I hadn’t though this album feels like every single song is a producer trying to mold and shape her into what they want instead of the other way around.

Monie Love :: In a Word or 2
6Overall Score
Music6
Lyrics6