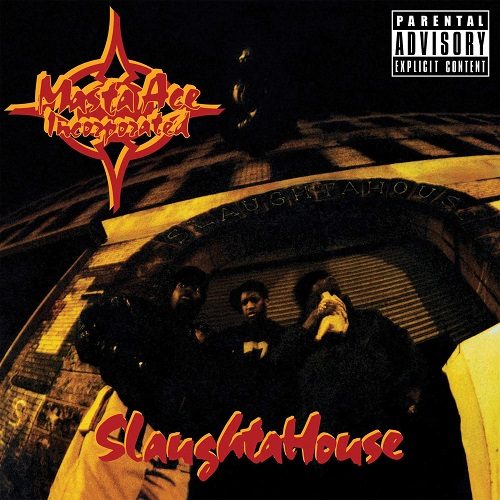 When it comes to the most overlooked and underappreciated emcees, Masta Ace is near the top of the list. For average hip-hop fans, Masta Ace often gets lost in the shuffle amidst the East Coast legends of hip-hop’s golden age, such as KRS-One, Nas, Biggie, and Rakim. Any true rap aficionado, though, knows of the Masta’s prowess on the mic and recognizes his knack for storytelling that has made him an underground favorite among listeners since his beginnings as a member of Marley Marl’s legendary Juice Crew in the late 80s. I’ve been a fan of Masta Ace ever since I first heard his relentless, knockout-punch diss of Boogiemane on his 2001 album “Disposable Arts,” but until I recently I had yet to delve into some of his earlier work. When I discovered that “SlaughtaHouse,” the debut release from his hip-hop group Masta Ace Incorporated, was not covered on Rap Reviews, I figured it was the perfect place to start.

Let’s make one thing clear from the start — despite the presence of fellow group members Lord Digga, Paula Perry, Eyceurokk, and Leschea on “SlaughtaHouse,” Masta Ace holds the spotlight from beginning to end. Each artist contributes some vocals here and there, most notably on the album’s final track, “Saturday Nite Live,” but the rapping is handled almost exclusively by the Masta, making it essentially a solo release with a few guest appearances. Of course, this is nothing to be upset about, as it is clear that Masta Ace is a step above the other emcees lyrically, and the limited interruptions allow his raw energetic lyrics to be the focal point of the album. And while the production is by no means sloppy or lagging behind, as it features plenty of hard-hitting, soul and funk-laden tracks, there is simply no debating the fact that Masta Ace is the star of the show.

Masta Ace’s unique blend of social commentary and creative storytelling is evident from the very beginning, starting with the album’s lead single, “Jeep Ass Niguh.” Over a heavy driving bassline, a pulsing trumpet sample, and an upbeat drum loop, he mocks the police, disses other emcees who refuse to battle, and boasts of his jeep’s bass-blasting sound system. His third verse finishes things off with a humorous account of an encounter with the cops for playing his music too loud, as he raps:

“Black boy, black boy, turn that shit down
You know that America don’t wanna hear the sound
Of the bass drum jungle music, go back to Africa
Niguh, I’ll arrest ya if you’re holding up traffic
I’ll be damned if I listen
So cops, save your breath and
Write another ticket if you have any left and
I’m breakin’ eardrums while I’m breakin’ the law
I’m disturbin’ all the peace cause Sister Souljah said “War!”
So catch me if ya can, if ya can, here’s a donut
Cause when you drive away, yo, you know I’ma go nut
And turn it up yo where it was before, nice try
But you can’t stop the power of the bass in your eye
I wonder if I blasted, a little Elvis Presley
Would they pull me over and attempt to arrest me?
I doubt, doubt it, they’ll probably start dancin’
Jumpin’ on my dick and pissin’ in they pants and
Wiggle and then jiggle and grab on they pelvis
But you know my name, so you never hear no Elvis”

Things take a darker turn though on “Jack B. Nimble,” which features an ominous bassline and a creeping horn sample. Masta Ace spins a story about man named Jack who is caught with drugs and a gun and is forced to run from the police, as he tries to hide out in an alley before ducking into a nearby building only to find that the cops have him surrounded on all sides. Even before the song ends with a hail full of gunfire, it’s clear from the final lines what Jack’s fate will be, as Masta Ace spits “Good thing you didn’t ditch the gun like I said G/ You’d be a sittin’ duck, dead full of lead see/ They didn’t come to arrest and take you back/ They came to finish and diminish you Jack.”

As “SlaughtaHouse” progresses, it becomes clear that there is no filler material to be found, although certain tracks do stand out above the rest. “The Big East” starts off with a funky, almost hypnotic guitar sample from “Handwriting on the Wall,” by Earth, Wind, & Fire,” which makes for one of the catchiest songs on the album. With a slow, deliberate set of drums and bassline to complement, Masta Ace addresses the problem of black-on-black violence, among other things, rapping “We talk about justice, and how little we get/ Yet black men be killin’ black men for talkin’ shit.” The title track “SlaughtaHouse,” which has the same recognizable sample as EPMD’s “You Gots to Chill,” also deals with violence, but does so in a different context, as Masta Ace satirically critiques the increasingly aggressive nature of hip-hop. He takes another jab at gangsta rappers on “Boom Bashin’, ” over a hardcore set of drums and sparse electric guitar chords, with lines such as “I’m still thick, with murderous beats and heavy kick/ And I’m sick of the so-called shots ya gonna lick.”

Given the number of hip-hop classics released in 1993, it’s easy to see how an underground album such as “SlaughtaHouse” could be overlooked, but it shouldn’t remain that way. Longtime fans are undoubtedly already acquainted with the album, but listeners who have yet to give the Masta a chance will find that “SlaughtaHouse” is an appropriate starting point. The beats are sample-heavy, with hard-hitting percussion and soulful trumpets and horns, and although the production does grow slightly repetitive by the album’s end, it hardly matters, as Masta Ace continues to take center stage. And while Masta Ace generally sticks to his New York roots, the beats often incorporate elements of g-funk, and the rolling basslines and funky guitars help bridge the gap between East Coast and West Coast hip-hop. The bottom line is that any fan of old-school hip-hop simply can’t go wrong with “SlaughtaHouse,” a must-have album which features some of the most creative rhyming to come out of Brooklyn.