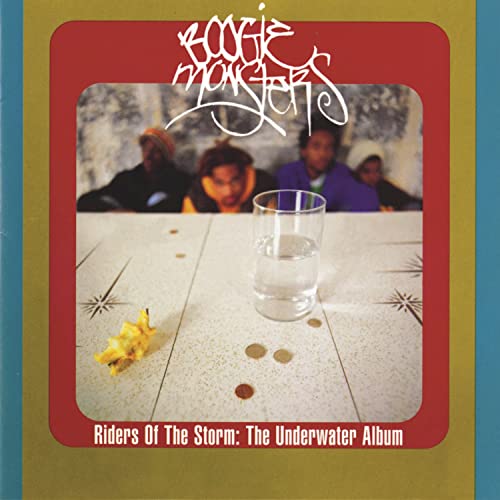 Riders of the Storm

Boogiemonsters :: Riders of the Storm: The Underwater Album

“Save that Achy Breaky Heart stuff for Billy Ray Cyrus”

“Recognized Thresholds of Negative Stress” is one of the most trippy rap songs to ever introduce a new group. If you didn’t know the Boogiemonsters before hearing it in 1994, you certainly wouldn’t forget who they are after. I can’t find a specific production credit for the song other than D! (Derek Jackson) and the group themselves, but whoever is responsible created a an incredibly atmospheric track. It transcends time and space, morphing into different forms from Mariana Trench church choir to fat boom bap bass to scratchy vocal transmissions from the dark side of the moon. The individual performances of the emcees are all fine but it’s the VIBE that makes this song pop. It remains a personal favorite of mine to this very day.

“Riders of the Storm: The Underwater Album” was a purposefully imposing album title, following up on their ambitious single with an equally grand vision. At first you might think it’s a misprint and it’s actually referencing “Riders on the Storm” by The Doors. Then you might decide it’s actually referencing a cult sci-fi comedy from the 1980’s also known as “The American Way.” Neither one fits the subtitle “The Underwater Album,” although “underwater” is certainly a good description of their first single. Eventually it starts to dawn on you that the group is purposefully defying any kind of definition. They’re “Strange” and that’s how they like it.

This is a group of emcees who are “living in the present (but) walking in the future.” Mondo McCann, Vex Da Vortex, Myntric and Yodared only have one goal — to be absolutely nothing like any rap act that came before them. This is both a tall order and one that’s usually a recipe for failure. When you make your entire persona about being what everybody else isn’t, that means you end up doing a lot of weird shit that just leaves listeners scratching their heads in confusion. Thankfully the Boogiemonsters avoid this pitfall and spit verses that are both easy to follow and hint at their hidden depths.

In hindsight I’m stunned that “Riders of the Storm” came out on a major label (EMI Records) and got supported by two music videos. By present day standards this is the kind of project that would be crowdfunded, released independently, and garner a small cult following while remaining almost completely invisible to the masses. Well… at least that last part is somewhat true. The Boogiemonsters rose from beneath the surface for two albums in the 1990’s and were quietly subsumed into the depths without a trace. Before that happened they left behind songs like “Salt Water Taffy (Slo Jam),” which is also noted to be one of the first times future producing legend Scott Storch would do session work outside of The Roots.

I’m torn between calling “Riders of the Storm” a hidden gem or a diamond in the rough. It’s certainly not a perfect album. “Mark of the Beast” is heavy handed in its messaging, lacks the funk of the other tracks, and hints at the religious schism that would split the group in half before their sophomore album. “Music Appreciation” is trying a little too hard to metaphor rap music as a woman, and Common had already done it better with “I Used to Love H.E.R.” so it comes across like a weak imitation. These missteps don’t take away from how fresh deep album cuts like “Old Man Jacob’s Well” are, a rap track that evokes terror without the horrorcore cliches of mutilated bodies and blood soaked walls.

On the whole I think “Riders of the Storm: The Underwater Album” was simply a victim of its own timing. Rap was caught in a moment in ’94 where thoughtful and/or weird rappers couldn’t find a foothold, as the industry quickly shifted its attention to West coast G-funk and many rappers intentionally or purposefully imitated it to cash in on the trend. I’m glad the Boogiemonsters chose to go their own way, and I’m equally glad at least one major label gave something different a chance, but I’m also sad that this album seems to have been forgotten to time. With any luck my write up will convince you that this is one you should look up for yourself.