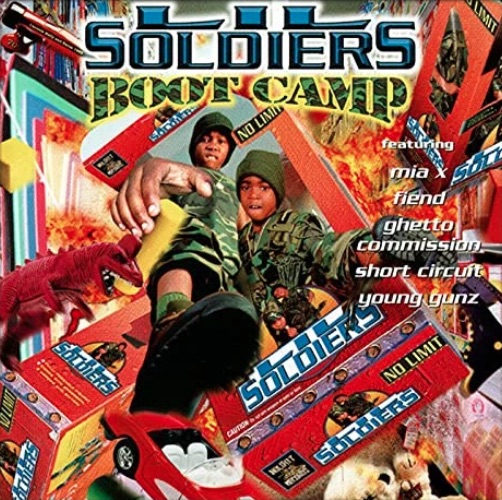 “I’m your favorite little snack after taking a nap”

“Master P we’re going gold.” No you’re not. “My whole fam got skills, that’s why we got the record deal.” That’s a lie. Listen — it’s not the fault of these Lil Soldiers in any way that someone decided to exploit them. Their bars may be terrible, but somebody wrote the lyrics for them. Their delivery may be terrible, but somebody coached them to rap like that. Their vocal tone may be like nails on a blackboard, but that’s the inherent danger of putting pre-teen rappers on the mic. It becomes more apparent when you put them next to adult rappers like Ghetto Commission on “I Ain’t Livin’ Right,” one of the few songs where it sounds like the Pound didn’t phone it in, and I have to imagine that was because they knew grown folks would rap on it.

It’s not surprising that the cover art for “Boot Camp” mentions all of the guest stars that appear on it. That’s the only way you’d trick someone into paying good money for this album. I’m sure there were dedicated No Limit fans who bought a new album every single week when they came out, but I was already getting burnt out by the time the Lil Soldiers came along and skipped this one. In retrospect I’m not sad about this. Even the soulful singing of Mo B. Dick and the thoughtful ode to their mothers on “Close 2 You” can’t save this album, because you can’t help but think these children have no business being exploited by Percy Miller. They should be in school, or playing sports with their friends, or playing video games at home (probably a Sony PlayStation or Nintendo 64 since this was 1999). Think I’m exaggerating? No. They make it abundantly clear with a song called “School On Lock.” They are bragging about having their “school locked down” and that doesn’t mean it was an active shooter drill.

This album is terrible. Don’t buy it, don’t listen to it, don’t do anything but apologize to these now grown men for what No Limit Records did to them.