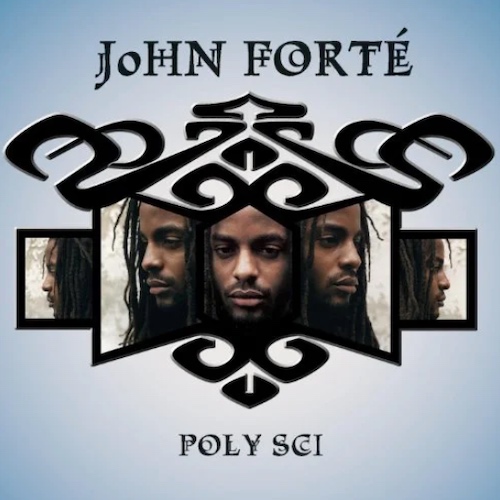 John Forté is from the school of rap artists who perform under their real name — Craig Mack, Keith Murray, and so on. There’s something cool about that to me. Image is often valued above substance when trying to position yourself as a rap star. If you have the coolest name, drive the coolest car, wear the coolest iced out chain, you have to be the man… right? It doesn’t matter if you’re just renting the car, the jewelry store loaned you the chain for the shoot, and no one in your neighborhood believes you’re MC Cold Killer. The flip side to that is that Christopher Wallace may or may not have made it under his real name, but everybody remembers Biggie Smalls slash The Notorious B.I.G. At the end of the day whether you rap under your real name or a pseudonym, it’s all about connecting with your audience.

Forté was well poised to do exactly that on “Poly Sci.” He had already been established as a Fugees affiliate and close friend of Wyclef Jean (another real name rapper) and dropped his solo album just a few months ahead of Pras doing the same with “Ghetto Supastar.” You wouldn’t be blamed for thinking 1998 was going to be the summer of the Fugees, let alone the whole entire year, but the reception to both albums was lukewarm at best. Personally I liked the lead single “Ninety Nine (Flash the Message).” Jenny Fujita sang a hook that remade a 1980’s pop hit by Nena, while both the aforementioned Pras and Wyclef made cameos. I still find myself bopping my head to the minimalistic electronic beat during the bars, even if Forté’s insistence on “what the dizzeal/I eat four stars at every mizzeal” rhymes tinged toward cringe-zeal.

Do you remember a second single from Forté’s album? I certainly don’t. It’s intriguing that Forté sampled from both Wu-Tang Clan’s “C.R.E.A.M.” and Puff Daddy saying “it’s all fucked up now” on “Victory” for the aptly titled “All Fucked Up.” There’s accidental truth wrapped up in those choices. Cash certainly ruled everything around Forté. Turmoil at Columbia Records reportedly led to poor promotion for “Poly Sci,” but it’s a classic “chicken or the egg” scenario where minuscule album sales (reportedly under 100K) gave them little incentive to do so. Which came first? Your guess is as good as mine. Forté certainly seemed to be predicting the future though.

It’s also strange that the album features two different songs named “Flash the Message” with completely different lyrics. It’s possible that the second samples from the first as Jenny Fujita doesn’t provide a full hook and could just be punched in. It’s equally possible that “Flash the Message” was a dud and somebody at Columbia Records said “we’re remixing this for a single” and paid for the rights to “99 Luftballons” to make it happen. In either case it was a strategic mistake to include both songs featuring Fujita on the album as it makes it impossible to not compare them, and honestly the one without the Nena sample sucks. Someone made a bad executive decision.

Ultimately Forté is responsible for what happened on his album, not any executives at Columbia or Sony Music. He self-produced a majority of the album, and the unimpressive sound of songs like “God Is Love God Is War” does nothing to enhance his stilted delivery. It’s clear from the bars that he’s an insightful and thoughtful individual, but I can’t get into his flow at all. The echo and reverb added to his vocals only makes it stand our more. He’s a better rapper than Pras, but that’s very low praise when you come from a crew that includes Lauryn Hill and Wyclef. One of the album’s lone standout tracks is “We Got This” featuring the late DMX. If there was one choice for a second single, a radio edit of this one might have worked.

Unfortunately Forté had even bigger problems than a mediocre album with dismal sails on the horizon. Just two years later he was arrested at the Newark International Airport for attempting to smuggle cocaine into the United States. He was convicted on the charges and sentence to 14 years behind bars, but then President George W. Bush commuted his term in 2008. He’s been a free man ever since. Ironically the albums he released during and after his prison term were better than his debut back in ’98. Go figure. I don’t hate “Poly Sci” but it’s far from the album it could have been, and no amount of finger pointing by Forté or the label can ever change that.