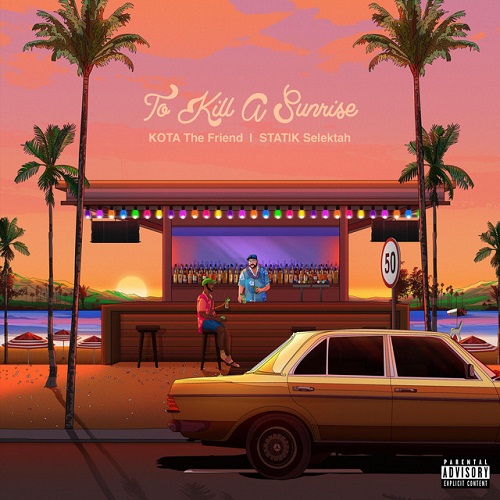 KOTA The Friend | Statik Selektah :: To Kill a Sunrise

The youthful, cordial, mellow, philosopher MC type isn’t quite as deeply rooted in hip-hop. Some might have figured as prototypes when rap’s repertoire of stock characters was established in the ’80s and ’90s, but practically all who have emerged since had that chip on their shoulder that you just expect from representatives for the artform. (And some of the most thoughtful seeming dudes turned out to have the biggest chip on their shoulder.)

Nevertheless the traits listed up top have been around, if moreso on a local and indie level. For this reason a Chance The Rapper or a Blu can be considered breakthrough artists, because they turned good-naturedness into hip-hop classics.

KOTA The Friend is a rap artist who comes across like he doesn’t want to bother anyone but still would like to share his thoughts with a greater audience. Whether rappers can connect with listeners on a greater scale without causing the least bit of irritation remains to be seen. Controversy has been the industry’s faithful companion, and in today’s climate, where practically every statement can be scandalized, it’s probably even harder to be a rapper people just like to listen to.

Nevertheless, KOTA has put out a number of releases and his reach is absolutely there, going by his streaming numbers (most of his songs pass the million mark on Spotify). Among them is a collaboration project with Statik Selektah that they dropped in spring ’21, a bit of a link to the hip-hop business of old.

While KOTA hails from Brooklyn, he seems to have a longing for palm trees swaying in the sea breeze, at least going by references in his catalog to Santa Monica, Malibu and other seaside locations. For a rapper who named his inaugural mixtape “Palm Tree Liquor” (after an actual store), “To Kill a Sunrise” feels like a complementary link in a continuing chain.

Repetition is a risk, so KOTA is well advised to place “Wolves” at the beginning of the LP, the wildlife analogy of the hook adding a few grains of grit to the considerate flow and melodic tone. Debating with himself whether he will have to kick down some doors, he warns us that he might “move into that room more militant than you thought”, in combination with letting the listener know, “I ain’t the same KOTA you first met”. At the same time he’s looking for ways out of the dog-eat-dog mentality that rules, for instance, his Brooklyn streets: “Makin’ peace with my enemies / We from the same place, it’s safe to say they resemble me”.

In another era, KOTA The Friend might have been the MC for a jazz/hip-hop fusion project or travelled A Tribe Called Quest’s orbit together with Consequence and Wordsworth. Consider the unconstrained approach he takes to the track “Hate”. On the other hand, this particular issue wasn’t as pressing in the old days (although definitely present). KOTA can’t be completely above the hate, but a pinch of conceit is always a good ingredient (“Flyin’ past haters even when I choose to cruise”). Beyond that, in a statement like “I’m steady pitchin’ out the love while I’m catchin’ hate / Gotta put yourself in position so you can catch the break” you can sense KOTA’s intent to find alternative strategies.

Another example of KOTA trying to put his spin on a standard situation (/song) would be “What Ya Sayin'”, which seems based on a real-life relationship:

If you wanted to overemphasize, you could say that KOTA The Friend is so bent on being on friendly terms with people that on “Go Now” he lets the guest singer spell out the problems in a particular romantic relationship.

KOTA may not write perfect songs as far as the craft of songwriting goes, but he has a knack for creating perfect moods for songs. “Go Now” goes hard in the softest, subletest way possible, KOTA offering a flow you can readily recline in. Sometimes Statik’s tapestry is inviting to the point the rapper stars to hum and harmonize himself a little bit, like to the rich instrumentation of “Day Glow” or the cautiously euphoric “Sunrise”.

To the observer, KOTA’s savior urge can at times manifest itself a little bit too obtrusively. The talent to put essential things into relatable sentences is definitely there, though. What we’re not witnessing is an MC on the level of Lupe or Phonte. More to the point, the self-professed “number one supplier of gems” collects power-ups whenever he acknowledges the obstacles in his way. Bars like “The rap Banksy, I don’t care how you paint me / It took a lot of negative energy to create me” are just more interesting than universal words of guidance. In that respect, “Live & Direct” (deriving its title from a sample lifted off 1987’s “Criminal Minded”) adds welcome depth to the KOTA saga. Which he pursues on enough other releases that put “To Kill a Sunrise” into perspective. If you need a trusted name like Statik Selektah to show you the way, KOTA The Friend got you covered with that as well.