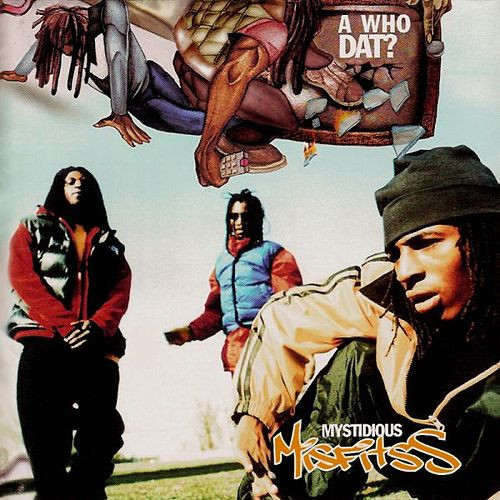 It’s punching below the belt to say the Mystidious Misfitss have one of the most apt album titles in history, but that’s their fault for calling it “A Who Dat?” and not mine. Epic Records abandoned any hope of success for this crew before the album even came out, releasing it on CD in Japan only and vinyl in the U.S. for the few deejays that had it on their turntables. If there was a North American compact disc I don’t know of it, don’t personally own it, and I suspect it would only have been sent to college radio with a hole through the bar code or a gold foil “property of Sonic Music” stamped into the cover. A who dat indeed! They never got a chance for anyone to answer that question.

A low quality rip and upload of the single “Upside Down” is the only music video that exists. Produced by Latief King and Spyderman, there’s nothing inherently wrong with the track or the raps of Rubberband, Mushmouth and Messiah Peekaboo. The Flatbush crew exhibit all of the trademarks of underground East cost rappers of the era — Trends of Culture, Yaggfu Front and even The Fugees (before “The Score”) come to mind. There are on-and-offbeat flows, interjections of patois, and funky samples designed to remind you of classics from days gone by. Unfortunately for these Misfitss a much better sample of Diana Ross’ “Upside Down” came along less than two years later to leave their one attempt to hit the mainstream a footnote in rap history.

This highlights the chief problem for the Misfitss. After being signed in the early 90’s and having several years to prepare their major label debut, they didn’t manage to do anything on “A Who Dat?” to distinguish themselves from the competition, let alone keep from being surpassed by it. The quality of the music isn’t the problem. There are plenty of head nodding jams here like the funky “Streets, Avenues & Boulevards” laced by Fresh Gordon, and I even enjoy the sound of cars racing through the chorus at high speed. If I had been given a mixtape in the 90’s with this song on it I would’ve immediately been more interested in the Double M crew.

The potential that shows through on such tracks is watered down by mediocre cuts like “Son of Sam,” a name which implies horrorcore rap but doesn’t feature the memorably manic raps of the Gravediggaz. “Gimme the Boom” is the almost obligatory ode to smoking weed for rap albums of the era, but can’t hold a candle (or lighter) to Cypress Hill. “Red Light” is another neck bobbing track with some funky horn licks, but I can’t pick a single quotable line from any of the Misfitss to share with you here.

“A Who Dat?” is one of the most perplexing obscure rap albums I’ve covered in a while. It’s a well produced, well executed record. The vocals are clear, the music is good and occasionally above average, and the presentation has the polish that you’d expect from being on a major and having the budget to go with it. That in itself may have been their downfall. The delightfully rugged and rough Wu-Tang Clan sound had captured the hearts of the East coast, and for slick and polished sounds you’d look to Bad Boy Records. You want that funk? Redman and Erick Sermon. The same year this came out on vinyl Mobb Deep rocked the landscape with “Shook Ones (Part II).” Everywhere you turned someone was outshining the Misfitss by being more something than they were. They don’t suck at anything but they’re not exceptional enough at any one thing to be memorable… so they aren’t.