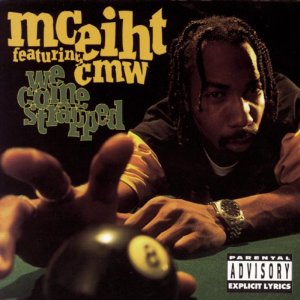 While virtually incomparable as musicians, many parallels can be drawn between the careers of hip hop pioneers MC Eiht and KRS-One, each a forerunner in his respective coast’s rap history. Each came to prominence as a member of an acclaimed yet controversial collective, Compton’s Most Wanted in Eiht’s case and Boogie Down Productions in KRS-One’s, and after initial success both watched their crews crumble around them as their larger-than-life characters commanded a greater portion of the spotlight. BDP’s Scott La Rock died after their groundbreaking 1987 debut “Criminal Minded,” CMW’s MC Chill was sentenced to three years behind bars following their 1990 debut “It’s a Compton Thang,” and the rotating rosters of what were essentially supporting players led many listeners to consider Eiht and KRS as synonymous with their crews. Although neither group experienced a precipitous breakup, by the mid-1990s the star rappers were releasing highly successful “solo” albums, which despite classic material and hugely influential work under the group monikers may have been all but inevitable.

In many senses 1994’s “We Come Strapped” can be considered Eiht’s “Return of the Boom Bap.” After the first three CMW albums, this was the first LP credited to “MC Eiht featuring CMW,” a label that would carry over to 1996’s “Death Threatz” after which Eiht’s LPs were solely credited to him (CMW would regroup twice for group efforts in the new millennium). This shift also made sense from a marketing standpoint; 1993 had been a breakout year for Eiht as he was cast in the Hughes brothers’ “Menace II Society” and recorded the film’s popular theme “Streiht Up Menace,” a loose summary of the film’s plot. Eiht’s most successful album commercially, “We Come Strapped” continues much in the same vein as 1992’s “Music to Driveby,” an album notable, among many other qualities, for the tight chemistry sported between Eiht and producer DJ Slip. Eiht and Slip coproduce “We Come Strapped” in its entirety as 1/2 Oz. Productions, featuring extensive contributions from invaluable pianist Willie Z.

In 1994 the West Coast spotlight was largely focused on the sunny, synth-heavy g-funk coming from Long Beach, which makes “We Come Strapped” all the more impressive musically. Slip’s keyboards produce orchestral arrangements rich with swirling violins, sometimes furious and others bittersweet, sparse percussion, and murky basslines, making for tracks that are equally smooth as they are menacing. While there’s a distinctly soulful element to many of the tracks here, the evocative smoothness is often juxtaposed with Eiht’s harsh subject matter. Willie Z’s sparkling keys also provide numerous highlights, giving the songs a polished class even amidst periodic gunshot blasts and death threats.

On the mic it’s business as usual for Aaron Tyler, meaning that for those familiar with the CMW LPs it will be a welcome return to Eiht’s realm and for newcomers a shocking introduction to the mean streets of the CPT. It’s impossible to extricate Compton from any perception of Eiht, and while his CPT does bear resemblance to NWA’sâ€”hoodrats on the corner, one-time rollin’ by, rampant drugs and gun violence, and general anarchy produced by crooked cops, territorial gangs, and widespread povertyâ€”Eiht’s sounds like something from the movies: humorless, bleak, decidedly masculine, sad, fast-paced, a warzone here and a graveyard thereâ€”indeed, at times it sounds more like a being than a neighborhood. With each album to this point Eiht had continued to develop his character as a brooding, growling gangster, and beneath his threats of gunplay and hustling references, Eiht’s intriguing storytelling painted him as the rarest of gangsters who exhibited some flashes of self-awareness beneath his scowling demeanor. With longwinded first-person narratives, Eiht painted startlingly detailed profiles of the Hub City and its many pitfalls, be it through head-spinning criminal play-by-plays or introspective personal studies. I don’t mean to be unclearâ€”despite what DJ Quik might have led you to believe, nobody’s more G than E-I-H-Tâ€”but where Eiht may not have been ashamed of the life he purveyed, he treated it in a manner that made it sound unfortunate despite the completely unabashed nature of his crude, misogynist, R-rated rhymes. This conflict is one of Eiht’s most compelling traitsâ€”he certainly has no bones enumerating his weaponry on the third installment of his DJ Quik diss series “Def Wish III”:

“I’m giving you a chance, so get your bail on
I’m taking my nine and puttin’ it to your fucking dome
Now throw your fuckin’ hands in the air
When Eiht is evil cause I got the damn Desert Eagle, nigga
You on your ass like fast in a trap
Me? I fuck your ass like a hoodrat bitch in heat
Take two to your chin and punk I’m straight
Like I said in the beginning don’t fuck with Eiht”

“Take 2 With Me” is a gripping account of a dramatic police chase, made all the more effective thanks to a chilling arrangement with soaring strings, ominous keyboards, and a rapidly descending bugle fanfare that acts as the perfect foil to the ultra-smooth “All for the Money,” a gorgeous production that finds an exuberant Eiht extolling his paper-chase over silky guitar licks and a wafting flute line:

“Just call me the come up kid, G
Hard times kickin’ it in the C-P-T
So that means I gotta do what I gotta do
And if you ain’t down with the hype, fuck you
You’re coming up short when I slang
So when I hit your corner, you’re gonna be a goner
Nigga duck when my nine starts to buck
In it for the snaps so I’m crazy as fuck
I should be laying low ’cause one-times is real hot
Need to make a knot so I rush your spot
And it’s like that when I got the feelin’
If you don’t kill somebody else does the killin’
So when you hit the end of the road ain’t no turning back
I done signed a hood lifetime contract
Jackin’ and packin’ cause ain’t shit funny
Because it’s all for the money”

If these words sound ill-befitting for such an easygoing listen, Eiht’s infectiously laidback delivery and the soothing female background vocals ought to do the trick. “All for the Money” finds Eiht and Slip at their best, ironically placing a rugged gangster monolog over a track rich with nostalgic soul. Eiht would never be labeled a lyrical wizard, but his style and stories are encapsulating nonetheless.

Mike T shows up to lend scratches on the reliably gritty “Compton Cyco,” and the consistent tracklist yields further highlights in the cinematic title track, the musically inventive “Can I Still Kill It?” upon which Willie Z shines, and the heavy storyteller “Goin’ Out Like Gees,” a triumph of bells and strings for Slip. Spice 1 and Redman supply the album’s sole guest raps on “Nuthin’ But the Gangsta,” and the late standout is “Compton Bomb,” a beautifully melancholy orchestration coproduced by Ric Roc and anchored by a live stand-up bass, fuzzy electric guitar, and brilliant performance from Willie Z.

As a critic it’s easy to be harsh on Eiht for his overreliance on conventions and cartoonish thuggery, but as a rap fan one can’t help but fall for his inimitable style and violent yet self-aware hood tales, especially over Slip’s immaculate production. Eiht remains dutifully true to his craft, meaning that as a gangster’s gangster his West Coast funk is totally unblemished by such niceties as club tracks, love songs, or we-are-the-world records. MC Eiht may have been one-dimensional, but few have done what he did better than him, and his “solo” debut plays to all his strengths, with his gravelly, punchy drawl, unmistakable adlibs, and appealing “Endoludes” at the forefront. In addition, the eternally underrated DJ Slip turns in one of his finest performances with complex and consistently beautiful compositions on the boards. “We Come Strapped” finds Eiht at his career’s pinnacle, having honed his craft to an art before redundancy and oversaturation led to his becoming a caricature of his former self, and is a landmark West Coast record.