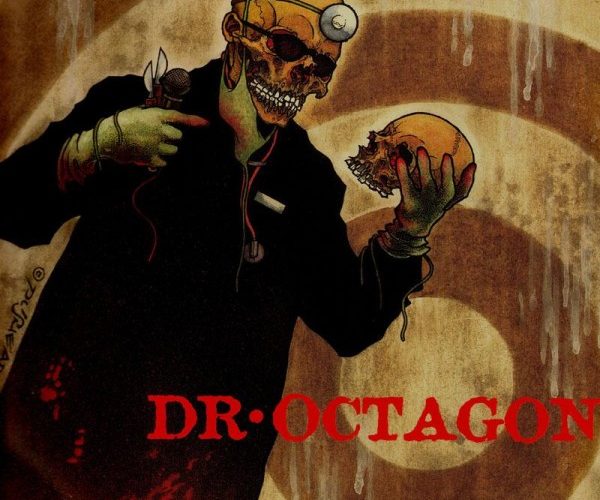 There’s no reason to beat around the bush, I’ll get straight to the point: this _is_ Kool Keith’s long-awaited solo album. Yes, it’s called Dr. Octagon, but Kool Keith has as many aliases as he does personalities. If you had any doubts to this being Kool Keith, you’ll know it when you hear the sexual perversion of the skits and rhymes and Keith’s off-beat flow that is still light years ahead of his hip-hop peers.

“Check out the boss on Broadway down to the walkway
Suckers with mics that end up with tooth decay
I, the Doctor, stop ya, in your world rock ya
Heads bop forever tunes and they won’t stop like hip-hop
keeps growing…
hip-hop moves on to the year 3000″

Yes, if we took a time machine and warped ahead to the year 3000 we’d probably still see Kool Keith, standing admist the rubble of New York with two turntables and a microphone, rocking the aliens and mutants. Or maybe Kool Keith _is_ the alien. On the Ultra-funky (double entendre intended) “Earth People” he claims to have come to Earth from Jupiter. He plays astronauts like a ukelele, and his seven-X-L has not yet been invented? Yes, Kool Keith is more abstract than Tao philosophy, and that’s what we’ve loved ever since the days of “Critical Beatdown”. Kool Keith will never write a boring rhyme — occasionally confusing and sometimes complete nonsense but never at any time has Keith dropped the same old same old that you’ve heard before.

Cuts are provided with infinite skill and precision by DJ Q-Bert (who in this post-modern explosion of DJ popularity has still not gotten his due). DJ Shadow also gets in on one cut, with an Automator Mix of “Waiting List” — so good that you could hardly miss the original, if indeed there was one. That’s another great thing about this album — you just don’t _know_. Most hip-hop albums take themselves way too seriously, but this album credits “Curt Kobane” on vocals and “Kelly Wootang” on drums. How funky is THAT? If you aren’t laughing, you should be bugging. Kool Keith obviously doesn’t care. You should though, because like every other record Keith has ever been on it will be hailed ten years from now as a classic. Do whatever it takes to find this album; order it, steal it, WHATEVER. Just GET IT.