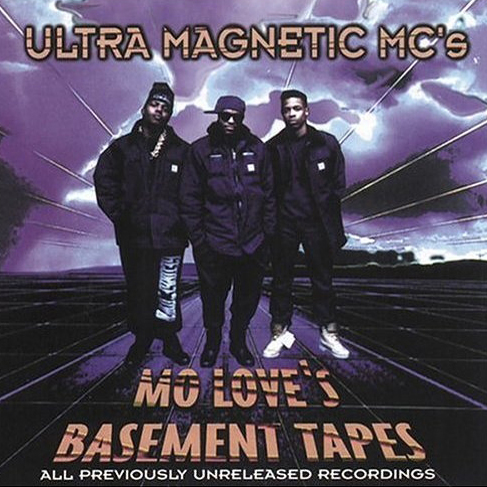 Several years ago I went Back to the Lab on an Ultramagnetic MC’s release titled “The Basement Tapes 1984-1990.” This was one of several compilations Tuff City released in the mid-90’s, cashing in on a period of time when the group had ostensibly broken up and Kool Keith was pursuing a steadily more demented solo career. Still unresolved since that review is the issue of whether Ced Gee was legitimately allowed to sell this material, which ranges in quality from poorly mastered to partially erased to completely un-fucking-finished. “Mo Love’s Basement Tapes” clouds the issue further, which may be what all parties involved intended. This release implies DJ Moe Love somehow authorized the tracks collected within but there’s no evidence to support or deny this theory either way.

Out of many quasi-official bootleg Ultramagnetic albums from this period “Mo Love’s Basement Tapes” has several advantages over the rest of the field. First this album seems to have been largely culled from the recording sessions for “Funk Your Head Up,” an album which to this day remains an unheralded hip-hop classic save for the “Poppa Large” single. Some songs here are clearly alternate takes that were discarded or remixed before the album’s release. “Message in the Music” is a perfect example as it mirrors the lyrics to “Message From the Boss” with only minor variations:

Kool Keith: “You wanna know my business? I got things to do
People to meet, people to see
Very important – matters to turn to
A waste of time for me to try to burn you
and talk a minute, you’re not worth a conversation
I speak intelligently, with information
Goin and flowin and showin, you’re still growin
adolescent — with a childish mind
Your brain is small, plus it’s hard to find
I need a microscope, to see a two-cent brain
that don’t think, when they rob and steal
and rape and kill — and murder their loved ones
Now put your brain in the guillotine
Slice up the cold cuts, you’re goin nuts in a three inch cell
You wanna low rate me?
You’re better off in hell, feel the flame
fire burn roast and toast
Let me heat up your skull, while I brag and boast
I keep your brain on stand-by
Cause this message, is coming from the source!”

Secondly the quality of the beats and rhymes is vastly improved over “The Basement Tapes 1984-1990.” Instead of sounding like demo tapes that only have value to Ultramagnetic scholars, “Mo Love’s Basement Tapes” has fully fleshed out songs whose singular problem is not being given a final mixdown. The volume levels tend to jump around at times and there’s a crackly quality to the vocals as though someone recycled the same reel to reel tape too many times. Nonetheless some tracks had enough value that they resurfaced on other compilations under different names, such as “Kool Keith Wild” being renamed “Kool Keith Model Android #406” and finding release on “The B-Side Companion”:

“I’m like a frequency, causing interference
With static, my apperance is dominant
with a prominent intro-duction
I do rhyme construction
Wear my boots, for no interruption
on the microphone, model 4-0-6
2-38, four-thousand five, 81
Seven kilowatts of power
Charging every hour
My Earth mission, I’m here to devour MC’s
Toys and predators
Small rappers, fake competitors
I’m bigger – and hard as a rock
Burn through steel, and brains I knock
like Enoch, when I crush and kill
Get ill, in time destroy anyone
who steps in my radius scanners
As the rhythm advances
My rhyme flow, creating your dances
You follow, increased metaphors
Scan control, your brain is sore
and hurting, while alerting the rest
I got the flames, and melting the best
of the wack ones, now who is left?”

Who indeed! That’s the third advantage this compilation has over other similar quasi-Ultra release – Kool Keith in his prime. Other albums of this stripe showcase Keith Thornton either at his earliest and least stylistically developed or at his zaniest level of post-Ultra energy which he hadn’t yet channeled creatively. “Mo Love’s Basement Tapes” is the solid middle ground between the two. The furious lyrical attack of “Fuck You” is reminiscent of “Pluckin Cards” and features a Ced Gee verse that doesn’t seem overly weak compared to Keith’s. “Wack MC’s” features Keith invoking his Rhythm X alter-ego threatening lesser MC’s with lines like: “I just crush, rush and then bust/any rapper I turn to microdust” and features hilarious samples of the old “I’ve fallen and I can’t get up” commercials. Most songs on “Mo Love’s Basement Tapes” follow a similarly braggadocious formula yet offer different takes on the production, such as the smooth R&B samples of “Watch Your Back” where Keith offers his take on what’s hitting the airwaves:

“I turn my radio on… now turn it off
Cause rap is gettin whack now, I’m comin back now
Step aside but hear from Rhythm X now
But not later, I’m totally awesome!
And brain damage, I totally cause them”

If there’s one overriding flaw in “Mo Love’s Basement Tapes” besides the fact most tracks are poorly mastered, it’s that there are no liner notes explaining the source or history of the material. If you’re familiar with the Ultra catalogue it’s easy enough to date the songs and recognize the recycled rhymes, and if you’re not this album is even more of a mystery. Calling a song “Freestyles” is utterly useless to the curious – how about letting buyers know WHEN and WHERE these freestyles were recorded? If you can put that aside and ignore the sometimes glaring audio glitches “Mo Love’s Basement Tapes” is a worthwhile album to add to your collection particularly if you’re a hardcore Ultramagnetic fan.