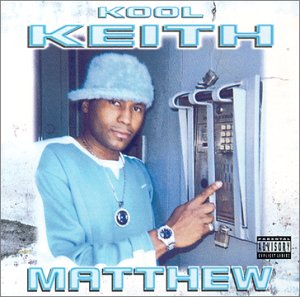 To say Keith has an ego is like saying No Limit put out a COUPLE of records. On the opening track “F-U M.F.” he’s clearly not having it from any of that “fake-ass wannabe hip-hop shit.” Let’s cut right to the chase – Keith comes out and says “Fuck the rap museum; I should be on the wall, next to Run-D.M.C., between Public Enemy.” Historically speaking, he’s right – few MC’s have been in the industry as long or been on as many records, solo or group. Keith scoffs at his competitors throughout the song: “You been rappin for 20,000 years and you ain’t got your fuckin deal yet?”

This kind of arrogance has worked to Kool Keith’s advantage on recent releases like “Dr. Dooom” and “Black Elvis” but is not quite as satisfying here. This is not because it’s a rehashed topic – Keith has in fact rehashed many topics through his lengthy career – but because his high self-opinion does nothing for his BEATS. Keith’s best work has always been when someone else was behind his boards – from Ultramagnetic MC’s Ced Gee and TR Love to Dr. Octagon’s Dan ‘The Automator’ Nakamura. Keith makes some dope beats but he also makes some BIZARRE beats that don’t quite work.

“Operation Extortion” is an example of the best and worst of Kool Keith’s skills colliding. Keith’s rhymes are vicious and hilarious when he says, “Motherfuckers walkin around tryin to be Bob Marley and Lenny Kravitz – that scarf shit around everybody’s head is for faggots,” but his beat on the track could only be compared to a three year-old banging on a toy piano. “I Don’t Believe You” has the opposite problem: Keith’s simple beat and bassline have headnod appeal, but the song title is mentioned every three seconds. “Youse a druglord – I don’t believe you; you pay your mortgage – I don’t believe you.” It’s not that Keith’s observation isn’t accurate – it’s just completely monotonous.

Keith keeps guest appearances to a handpicked minimum. Other than Black Silver on “Sweet Unique Pete” and Bumpy on “Keith N Bumpy” (no, not Freddie Foxxx) it’s just 13 tracks of rapping and 4 skits. The album has wildly inconsistant shit from the spacy futuristic “Diamonds” to the mediocre like “Extravagant Traveler” and “Lived in the Projects.” Keith is always a little left of center mentally, which keeps even the lesser tracks interesting, but only to a degree. Ironically, the best cut may be “Baddest M.C.”, where Kool Keith is straight up bragging about his money and status. Sometimes the old school styles work the best. Keith does have to be dogged for one line in this song though: “Forget the internet and the website, that’s no way to step right.” Et tu, Kool-Keith.com?? (EDITOR’S NOTE: Ironically this website no longer exists.)

Keith’s reputation will no doubt keep a solid fanbase of loyal buyers (this reviewer included) checking for this album, but I’m already fiending for the last one and waiting for the next one. Keith doesn’t strike platinum or gold everytime; so on this one he’s batting .250 instead of his normal .300 range. Hopefully the slump is temporary.