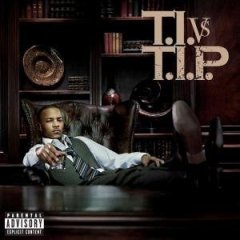 And thus begins “T.I. vs. T.I.P.” with our erstwhile protagonist contemplating if this rap shit is really worth it any more, all the while confusing the fictional Atlantic Records employees on the other end of the phone with his slang. The first pair of parenthesis was Joe Stuffedshirt not getting it while the last line was his exasperated secretary explaining to him just how clueless he really is. It’s quite the provocative way to open a new album when you’re dropping one of the summer’s most anticipated albums and you’re looking for your label to push sales through the roof, but fortunately that’s all part of the plan for “T.I. vs. T.I.P.” Rather than trying to push buttons at his label (which would certainly not be unprecedented for disgruntled MC’s to do) he’s trying to illustrate the dichotomy between the artist who would give it all up to live a normal life and the self-described King of Atlanta who balls like no one else.

“Now do it to the maximum, take it while you askin’ em
Don’t listen to them suckers when they say you too irrational
See, I said it on “King” and them lames started laughin and
Same suckers now want the King on a track with ’em
I composed several classicals, you know like “Top Back”
“Dope Boy”, “Bring ‘Em Out”, and “What You Know About That”
Now they ask how I talk, what you know about that?
Dominated oh-six, now I’m goin right back
See me rain hell, I done showed you like that
Even Denzel say, “Damn, I ain’t know it like that”
Nigga yeah, still Bankhead, you can tell
Ain’t nuttin changed but the name on the mail
I still kick in do’s with them thangs in the air
Up in Benihana’s, see me slang in the chair
I will slang ‘caine, no such thing as a jail
Say you need a hundred squares? It just came off the scale”

There it is on the first single – the braggadocious cocky man who’s got more hits than Pete Rose and isn’t afraid to talk about it; the man who seemingly runs a bigger drug cartel than Tony Montana in his prime.

I don’t think Atlantic is recouping so hard off Clifford Harris that he has to quit rapping as T.I. and go back to scrapping and hustling. While “T.I. vs. T.I.P.” is presented as the balance of opposing forces which you can call the good versus the bad, the man versus the monster or any other cliche you like, the only real opposition here is the other rappers who he’s competing with for that number one spot. You’ve heard a lot from the various rap websites and magazines about all the drama in T.I.’s life but frankly it takes a backseat to the music here. T.I. albums usually feature a half-dozen songs or more that sound like they could be chart-topping singles at any time and “T.I. vs. T.I.P.” is no exception. The Wyclef produced (and guest starring) “You Know What it Is” is laced with hypnotic siren sounds and a finger-snapping drum track to keep the dancefloor moving. Just Blaze sets a frenetic pace with the string laced “Help is Coming” and T.I. matches by spitting at a speed Twista would be impressed by. Eminem & Jeff Bass help T.I. “Touchdown” and Em even makes a guest appearance on the cut. There’s so many choices for singles you could hardly go wrong pickingANY track – even Jay-Z and Busta Rhymes make cameos on the album on “Watch What You Say to Me” and “Hurt” respectively.

For T.I. fans who have long been waiting for the seemingly oft-delayed “T.I. vs. T.I.P.” the good news is there’s nothing to worry about. While the fictional war between wanting to quit and become a man of peace does battle with the Godless hustler who just wants his by any means necessary, the real life relationship between T.I. and Atlantic Records is sound enough that they were obviously prepared to go big budget and keep “Big Shit Poppin'” for Mr. Harris. It takes two to tango though and if T.I. weren’t the charismatic, energetic, hitmaker T.I.P. it wouldn’t matter how much of a promotions and marketing budget they laid out for him. Thankfully the Bankhead rapper you know and love ain’t change a damn thang and while this album may not blow down the doors to the Rap Hall of Fame as the greatest of all-time it offers a comfortable consistancy that should keep it hot in your Hummer all summer long.