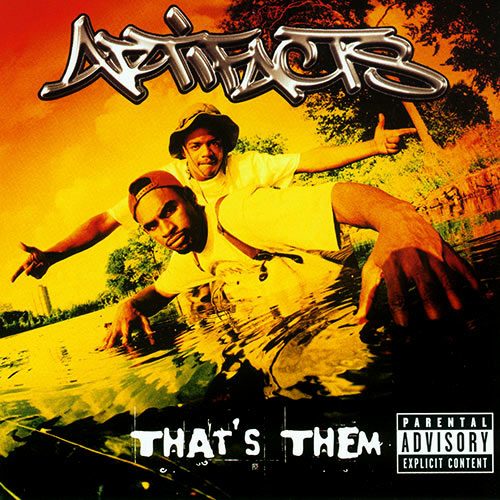 It’s amazing how great MC’s can make records and get totally slept on, while booty ass crews like Junior M.A.F.I.A. sell 3-500K and get live ass homepages from their record label. I had always assumed that the Facts had their own page, since they had already released one album, were about to put out a second, and had some of hip-hop’s most classic singles and remixes. Surprise! After getting some unexpected e-mail from Tame One’s mom, I checked out the Atlantic Records homepage, and couldn’t find the Artifacts anywhere.

Personally, I considered that an insult; so with the support of Tame’s mom and the crew, I created the Official Artifacts Homepage. I preface my review of their second album by telling you this because I feel I may not be objective as a fan and supporter who is trying to get them the props they deserve, but nonetheless I wanted to write a review of their newest release.

The album starts out very nicely with DJ Kaos displaying skills on the Art of Scratch, obviously an homage to the Art of Facts that the crew dropped last year; a really nice cut produced by Sean J Period. Sure enough, the Art of Facts comes after, and you get a nice one-two combo. Tame drops some really nice lines in this joint:

“Wait up, let me lace up the place like boots
make loot, and Proceed to rock like Roots
I tear the roof off, and when I fuck don’t take my boots off
I shoot from the lip, and make your nose glow like Rudolph
You soft, so let me hit you off with all the hardness
Artifacts shit, we got the hard shit regardless”

Althoug the album slows down a little on tracks 3-5, the shine comes back in when Lord Finesse and Lord Jamar get down on the Collaboration of Mics. Finesse and the Facts together was a natural and long overdue. The stellar _High School High_ cut The Ultimate also drops in, as well as a hyper Beatminerz track called It’s Gettin’ Hot. The album really doesn’t slow down from this point, but I really get ope on the extra heavy bass and lyricism of Break It Down:

[El Da Sensai]
“In this field, niggaz get killed, quick with the skills
Intact, ill with raps, buildin facts to fill
gaps react, tap into your internet and patch into
my steez or my style, niggaz down to make the G’s while
MC’s get the fuse cause I’m the bomb specialist
With the wettest, testes, deadly like asbestos”

With a Return to Da Wrongside sequel to their debut LP classic, and a Showbiz remix of The Ultimate that’s just bangin, the album is complete. This is an album strictly for lyrical skills and nice beats. It’s not always topical, but when two MC’s get open on a mic session and they got the ill rhymes and distinctive voices Tame and El do, there’s no question: you got yourself one fucking nice album. Unfortunately though Atlantic seems to give a fuck whether this album blows up or vanishes quietly into the dust on the album rack. My own advice — if you really love hip-hop and East coast skills, this will be a welcome addition to your collection on vinyl, cassette, or CD.