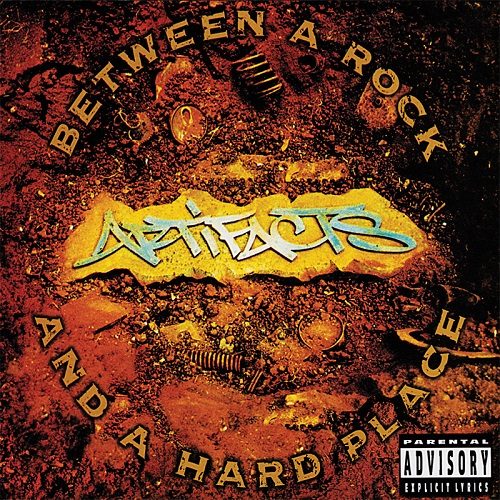 Between a Rock and a Hard Place

Artifacts :: Between a Rock and a Hard Place

By 1994, several Hip Hop duos had already established a high-quality standard in back-and-forth rhyming amidst unbridled chemistry and fluent exchanges that impressed upon the listener a friendship that emanated further back than simply rhyming on the block. Groups such as Run-DMC, A Tribe Called Quest, De La Soul, EPMD, and Outkast entrenched themselves in Hip Hop as rhyming couplets wherein the sum was greater than its parts, even if the parts were still exceptional independently. At each of the aforementioned groups’ peaks, classic albums resulted less so from the individual performance than the amazing fluidity sparked by complimentary flows and a vision truly shared by both members. In late 1994, the Artifacts came to embody such a description with their album “Between a Rock and a Hard Place.”

Similar to De La Soul and Outkast, the Artifacts were emboldened by a sense of trying to be different (or, excuse the pun, blazing a new path). Although group members Tame One (aka the Notty Headed Terror) and El The Sensai did not envision an even newer “DAISY Age” or “Dirty South,” their Hip Hop utopia consisted of endless graffiti walls, raw MCing and Phillie blunts atop the dreary landscape that is New Jeruzalem (New Jersey). In essence, Artifacts had brought backpack rap to the fore with their odes to graffiti, representing a sharp shift from the gangsta rap genre and offering an infectious alternative to heads who were simply looking for great beats, rhymes and spray-painted life.

“I’m out to bomb like Vietnam under the same name Tame One
The bad one, ink flow master bastard with the Magnum
I tags up quick, and then I steps to the exit
When it’s time to get cessded or flex on some fresh shit
Some wack crook stole my black book, I know who took it
I know his whole tag because the fag writes his name crooked
The ink I use might stink, but you gotta think
I got my props, hops, cause my tags don’t shrink…”

After the album starter “C’mon Wit Da Git Down,” a model introduction produced by Buckwild with a contagious guitar riff and laced heavily with braggadocio rhymes to give you a sense of where the ‘Facts are coming from, Tame rips the above verse from “Wrong Side of Da Tracks” and sets the streets ablaze with fat caps, giving recognition to that corner of Hip Hop that receives less than its fair share of the limelight. While a feat in itself, the underlying lesson was the complimentary flows of Tame and El, and how easily they meshed, despite the complex, acrobatic verbiage from the former and stop-stutter flow of the latter. Both tracks indeed set the album off incredibly right.

In the following three tracks, both Buckwild (“Attack of New Jeruzalem”) and T-Ray (“Heavy Ammunition” and “Notty Headed Nigguhz”) definitively embrace the banging horns set apace in Black Moon’s “Enta Da Stage,” providing an electric and bass-heavy context for the Artifacts to rip super-charged lyrics, or as El puts it: “I’ll let loose to juice to freak the funk spunk, no punk/ I’m doin’ the funky chicken as I’m kickin’ like a Shaolin monk.” This is proceeded by “Whayback” – a most nostalgic look back at the ’80s that leaves those in the know in constant reminiscence – where Tame lashes out the following: “Real deal Hip Hop, when Biz used to flip-flop/ His fat ass, on stage, to do a dance in busted Reeboks/ Niggas musta forgot, when real rhymes was hot/ Cause now if you ain’t gold, you ain’t got no props.” Perhaps one of the greater anthems on the album is “Lower Da Boom,” a highly convincing argument to legalize marijuana, as both Tame and El flex their cessed-out vocals on the benefits of weed. Here, T-Ray provides a rhythm dictated by a commanding bass line (something akin to Diamond D’s “Sally Got a One Track Mind”), which provides for an excellent backdrop on a topic of concern to many in the street:

Tame One: “Oh, I hope I live to see the day they make it legal
so all the people can’t see what I’m smokin’ ain’t evil
Stop callin’ me a pusher ’cause I take pulls and take tokes
Cut snakes, cut breaks, and I hate fake folks
So pass the cheeba, seÃ±orita, cause I need a
fat fuckin’ Phillie just before I funk a freaker
Creatin’ from the milk crate with hooks and riffs
I can lift ’em, and shift ’em makin’ jams like this
With the blunt in my left hand and the Phillie in my pocket
MC El at my right with the mic so I can rock it
Cess makes my eyes red, but shades only cost three bills
in Hooterville, so I’m chill…”

El the Sensai: “(Are you weeded?) Nope, see, I’m doper for the session
Catchin’ wreck, check the tec, cause I’m sober for the sketch
If I’m caught smokin’ blunts, I catch a bad one from my clan, see
I’m higher than a messiah so you know I’m handy dandy
Legalize it, holmes, cause the zone’s gettin’ bigger
from the whites, to the Ricans, cause they learned it from the niggas
So who’s the first to kick it real, for the, cypher
Eight Phillies so you know you gots to pass the other lighter
Pass the incense, gents, it smells out in the hall
My groupies think I’m stunnin’ cause I’m six feet tall…”

Despite the descriptive lines proffered by El in this verse, it is unfortunately evident throughout the album that he fails to keep up with the rhyming dexterity of his partner. This is glaringly apparent in the album’s final two cuts (three if you have the version with the “C’mon Wit Da Git Down Remix,” where Tame runs a lyrical gauntlet that you wish continued throughout the whole song since Busta’s guest appearance, while flaring in charisma, lacks both flow and substance); however, this might only be a personal preference. In fact, while I do not mean to vilify El’s skills, as I feel he was a great compliment in style to Tame, I sometimes felt that he came up short. Moreover, the album is marred by its lack of variety and artistic vision that aspires to hit on more levels than weed, graffiti and battle MCing. Both had the skills to tell a story, write a clever metaphor or relate to something bigger, but do not attempt to do so, leaving the listener devoid of a greater purpose.

Ultimately, “Between a Rock and a Hard Place” cemented itself in the golden year of 1994 as a solid, nearly flawless outing, displaying lyrical prowess and a unified sound guided by heavy bass lines and blaring horns. Unfortunately, one can only dream of what a third album by the now defunct group would have been like, as their solo efforts have since left much to be desired. (In this respect, El has become the more ambitious MC as Tame’s albums have yet to grow outside the formula constructed on “Between a Rock…,” and lean ever more in the directionless void of drugs and weed smoke). Nevertheless, what they had made in this album will always be a lasting legacy.

Artifacts :: Between a Rock and a Hard Place
9Overall Score
Music9
Lyrics9