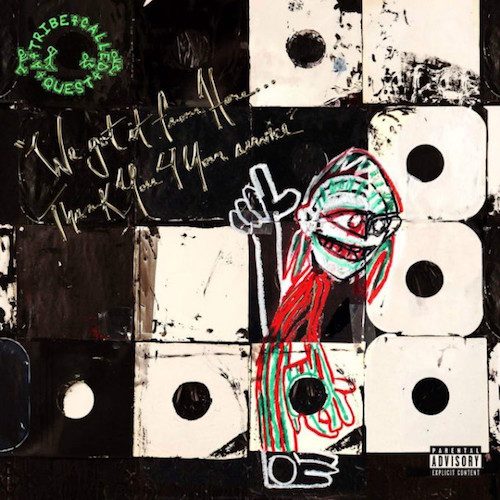 A Tribe Called Quest :: We Got It From Here… Thank You 4 Your Service

It has taken a few weeks for me personally to digest and absorb this album. I had already made my peace with A Tribe Called Quest saying farewell with “The Love Movement” almost two decades ago. I think I personally enjoyed the album more than the contributor who wrote it up for us, but I can also relate to her feeling of bitterness that this “final collection” was far from the musical or creative pinnacle of their career. That was only the tip of the bitter iceberg though. Far deeper beneath the surface was personal animosity that came crashing through the 2011 hip-hop documentary from Michael Rapaport, which seemed to Titanic-ally sink any hope they could ever work together again on an album.

That’s why “We Got It From Here” was such an unexpected surprise, especially following the passing of Phife Dawg earlier this year. He had been working on this album in secret with Tip and Ali Shaheed, and the album’s title was his choice, so in every respect this album can be considered a tribute to his legacy. The force of his personality comes through despite the serious health challenges he was faced with on tracks like “Black Spasmodic,” and while his age is evident in his vocal tone it doesn’t decimate his delivery in any way.

“Now who want it with the Trini gladiator?
Mid finger to you haters you biters not innovators
I take zero for granted, I honors my gift
Champion pen game plus I’m freestyle equipped
You clowns be bum sauce, speak my name it’s curtains
Alhamdulillah my crew’s back to workin
Trash rap the dead, p—y kill di chirpin
No more f— bwoys sit down s–t can only get worsen
And how do you touch mic with flows uncertain?
Spit game dry boy that flow ain’t workin
Folks throwin’ items, them vexed and cursin
F— made me wanna see these niggas in person?
Third song in motherf—ers dispersin
Only to realize Donald Juice in the buildin
Big tune this for man, woman, and children
+Back On My Bulls—,+ Bus-a-Bus let me kill dem!!!”

I’ve got some bad news though – Tribe was NOT DONE with this secretly recorded album when Phife passed. We’ll never know just how many bars like this he had in his mental rhyme book that he never got to put to tape. Now the amount of guest appearances was probably planned well in advance given this would be the true “final album” and they wanted to go out with a bang, but once again (yeah y’all) we can’t say for sure they didn’t put in a few extra phone calls to finish where he left off. The good news is that if you try to figure out what didn’t turn out the way Phife would have wanted, you won’t be able to do it, because he’s got a writing credit on all sixteen tracks. The only thing that seems out of place (ironically) is hearing the long forgotten Tribe member Jarobi drop bars like those on “Lost Somebody,” clearly a song written after his passing.

“Never thought that I would be ever writin this song
Hold friends tight, never know when those people are gone
So, so beautiful, opined indisputable
Heart of a largest lion trapped inside the little dude
Took me quick to granny house, now we eat the curry food
Talking hopes, dreams, plans, leak ice, never scared
Brand new pair of Nike Airs, avenue upstairs (c’mon!)
Mailbox mayors, all our rhymes was written there
A nigga wanna battle you know Phifey didn’t care
Jarobi with the beat, into new ass we tear (whattup?)
I’m a flash forward well, took a trip to ATL
Cookin in the kitchen makin sure my nigga eatin well
Wedding in Tobago you know exactly where I’m at
Standin on the side of black Malik Izaak”

The two songs I’ve focused on thus far aren’t even best that “We Got It From Here” has to offer. This is sixteen tracks, an hour deep, and broader than the Boulevard of Linden. With Tip and friends producing, the results are almost always on hit, and when the hits come Tribe isn’t afraid of who gets hit in the crossfire. “We the People” sees Q-Tip purposefully channeling and subsequently mocking the alt-right that was dredged from beneath the ugly surface of America by the 2016 election season. It’s a bruising listen and it’s meant to be, but Phife softens the blow with his bravado: “Who could come back years later still hit the shot?” Tribe could.

Remember those guest stars I mentioned? They clearly relished their opportunity to be part of this album, both to work with Tribe AND pay tribute to their legacy. Andre Benjamin’s rap on “Kids” both makes me miss OutKast and hope that Q-Tip can repay the favor if Andre and Big Boi ever get back together in the studio like Tribe did. Busta Rhymes has been known for his relationship with Tribe over the years so for him to appear multiple times isn’t a surprise, but he totally RIPS THE DOOR OFF THE HINGES with his performance on “Mobius” — it’s a “rrrrah rrrrah” dungeon dragon worthy rap. Kendrick Lamar drops in on the minimalistic and jazzy “Conrad Tokyo” and you can feel the influence Tribe had on the Cali kid, and Talib Kweli’s probably heartbroken listening to “The Killing Season” knowing he won’t ever have a chance to do it again. When he raps “Take a bow this might be your last performance” the hairs on my neck stood up.

You’ve probably seen and heard a lot of people falling over themselves to praise “We Got It From Here” over the last few weeks, and I’m glad I avoided a rush to snap judgment just to be part of the herd, but I honestly can’t find any reason to disagree with the prevalent assessment either. This album succeeds in its goals despite the heartbreaking passing of Phife Dawg while it was being recorded, and even though I had accepted “The Love Movement” as their last chapter all those years ago, this is a much more fitting end – a real end both figuratively and literally now that Malik Taylor is gone. This is the album they SHOULD go out on. It’s a fitting end.