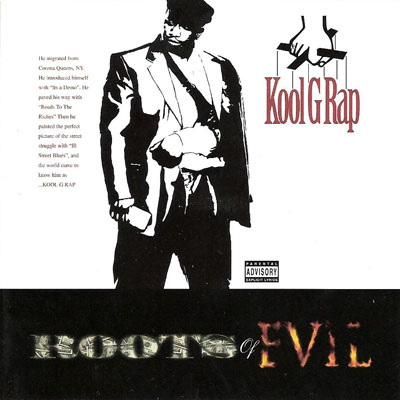 With those words, Kool G Rap turns on “The Heat” and blazes with the hardcore shit that we’ve come to love from hip-hop’s crispiest lisp master. His forthcoming album Roots of Evil is sure to keep the heat on high for the nine-eight and nine-nine.

Many people who heard 4, 5, 6 three years ago might be skeptical, and with good reason. After smacking us across the face with three classic albums co-starring DJ Polo, G Rap’s fourth album was lyrically strong but a little short on the beats department. Other than his first single “It’s a Shame” and the burning Nas duet “Fast Life”, the album quickly faded from memory.

Make no mistake though, G Rap doesn’t shoot blanks twice. Production both by G Rap himself and hardcore master Doc the Butcher make noise like a semi-automatic. “Cannon Fire” freaks an Isley Brothers track and turns it into an ill saga which can be considered a worthy sequel to “Streets of New York”. “Tekilla Sunrise” has a hispanic influence lovely that makes you want to see G Rap and Antonia Banderas busting off clips at each other in an action flick.

And that highlights G Rap’s biggest strength — cinematic, story-telling raps. G has always been blessed with an ability to make his lyrics visually vivid, as though you could walk right into the portrait his words painted. His P.R. company calls it “Black Mafioso” but I prefer to call it FAT ASS SHIT. He doesn’t just talk about busting guns and killing enemies.. he’ll tell you what the drama was, who the snipers were, what they were wearing, who got hit where, how they hit the ground, and what their blood looked like on the hard concrete. Listening to G Rap is like reading a Donald Goines book; he puts you RIGHT THERE in the scene.

So be on the lookout for this album when it hits your spot, and be checking for the first single “Foul Cats”. I also recommend “Home Sweet Funeral Home” and the party anthem “Can’t Stop the Shine” in which G flashes his style as one of the ORIGINAL rappers to put Martini and Rossi and Versace on the map, long before that shit was trendy. Pay your respects to the ORIGINAL “G”.