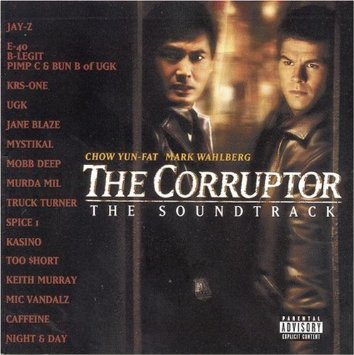 Let’s see: pair a superstar of hardcore Asian mob movies with an ex-New Kid on the Block and pour them in a blender — and you get a hip-hop soundtrack? Who’d have figured. I guess that’s what you get when Billboard reports that rap outsold rock music by nine million records in 1998. Ten years ago, this soundtrack would have been Guns’n’Roses and Bon Jovi. Five years ago they wouldn’t have made this movie either – it strikes me as a cheap rip-off of the “Rush Hour” formula, which was itself very formulaic, but fuck it. This ain’t Hollywood Crit 101, it’s rap reviews. So let’s see what The Corruptor has to offer.

The line-up, as can be expected on any Jive Records released soundtrack, is 99% Jive artists. Even No Limit’s Mystikal was formerly under the wing of Jive. The biggest exception would have to be Loud/RCA’s Mobb Deep, and they come through with the blazing “Allustrious” – putting any other recent soundtrack jawnts they’ve done to shame. Prodigy spits some of his most fiery lyrics to date on this one.

Your shit’s weak, your best song was mediocre/ Fuck a penis, how dare you entertain the thought/ that you could come out to challenge me in blood talk?/ Take a walk jerk, this ain’t a verse writin Johnny Gill

There are plenty of other noteworthy songs. Jay-Z fans will appreciate the remix of “Money, Cash, Hoes” – it uses the same beat but has two new verses. KRS-One sets off a New York all-star collabo’ with “5 Boroughs”, even though New Jersey’s Redman somehow snuck up into the mix. Whatever. It’s also nice to see the Reverand Run (of Run-D.M.C. fame) back in the spotlight on this song, representing for Queens. One question – why is this song censored on an album with a parental advisory? That’s just wack. You can also check for Jane Blaze’s surprisingly good “Show Down” – looks like she’s set to be the new femme fatale of rap. New jack Murda Mil also flips a really dope lyrical concept as he raps about being a dollar bill in “Have You Heard of Me?”

On the downside, skip the songs by Keith Murray (not the best song to represent him while he’s on lockdown), Kasino f/ The L.O.X., Truck Turner (why did KRS put this man on) and Night & Day. It wouldn’t be a soundtrack if there wasn’t some filler, right? But on the whole, you could do a lot worse than to beCorrupted by this compilation.