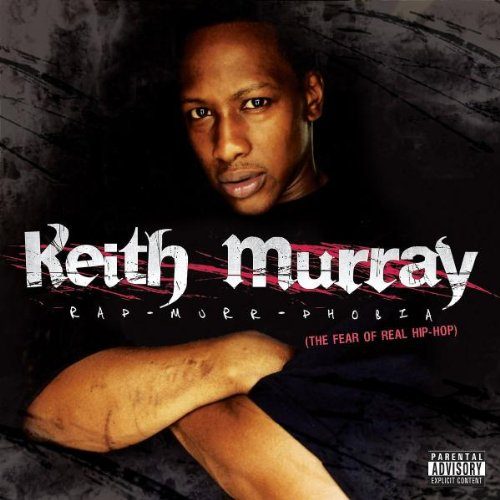 If you’re of the right age range songs like “The Most Beautifullest Thing In This World” and the remix to LL Cool J’s “I Shot Ya” give you great memories of the fantastic lyrical ability of Keith Murray. His latest effort, Rap-murr-phobia, which is due out at the end of the month, is a bit of a throwback to those days and is completely produced by fellow Def Squad member Erick Sermon. This week we caught up with the loquacious Mr. Murray to talk about his new music, why he didn’t like his last album, and the interesting route he took to get his mind right.

Adam Bernard: How’s it going Keith?
Keith Murray: It’s coming along well, thanks for asking, I appreciate it.

AB: Talk to me about Rap-murr-phobia, what is it the fear of?
KM: Real Hip-Hop. Rap-murr-phobia, the murr is for Murray and it’s the fear of real Hip-Hop because as you see Hip-Hop is taking a real beating right now. They’re pointing fingers. They’re saying Hip-Hop is the cause of this, the cause of that. They’re saying Hip-Hop ain’t selling like it used to because middle America can tell that it ain’t real, they can tell the artists are fake with the bling bling and the fucking drugs and gang shit, they want more creative shit. Well Def Squad’s been creative all this motherfucking time, it’s time to let the real shit shine. Al Sharpton running around here boycotting G-Unit ad all this bullshit.

“And the media is killing it but the media is the ones who glorified the bullshit before. We were telling niggas all along that’s not it.”

AB: We definitely have some people talking about it who probably shouldn’t be.
KM: All day. And the media is killing it but the media is the ones who glorified the bullshit before. We were telling niggas all along that’s not it. Now what, they want creativity. OK, Rap-murr-phobia motherfuckers, it’s time to face your worst fears July 31st.

AB: Do you feel the reaction to this album is truly going to indicate people’s feelings towards Hip-Hop right now?
KM: Well the nigga that’s on the record and the way that we do our thing, they’re going to see a side of Hip-Hop that they don’t normally see that they’ve been praising, that they’ve been giving props to. They’re going to see a real side of this shit. That’s what I’m talking about in it. I’m not talking about “I dedicate an album to the media and Al Sharpton and them.” I’ma dedicate an album to them in a sense where I’ma do what I want to do and really bring forth the true essence of Hip-Hop, not that sugared down shit that they thought was Hip-Hop. The gig is up motherfuckers, let a real motherfucker shine!

AB: What label will you be releasing this on?
KM: Def Squad/Koch.

AB: Redman’s last album was on Def Jam but didn’t get much promotion and Def Squad in general hasn’t been in the public eye recently. What are you doing to make sure you get back in that public eye?
KM: What is the public eye, though?

“Just being me. Having a shot to be like yo, he’s a rapper, they’re putting him out, listen to what he has to say because it’s significant.”

AB: I would say the public eye is the people on iTunes, the people requesting the videos. So I guess the public eye would be between the ages of about 14-27. What are you doing to be heard by those listeners?
KM: Just being me. Having a shot to be like yo, he’s a rapper, they’re putting him out, listen to what he has to say because it’s significant. I have the number two most added record to urban radio across the nation so they’re listening. They want to see, so show em what it is. I got that shot now and that’s all I needed. I’ll go around the world barefooted to advocate this shit.

AB: The radio adds is impressive on an indie.
KM: On Koch we got the number one radio promoters in the business. As you see now majors are not selling that many records with the exception of a few guys who’ve been able to get into the public eye and do well for themselves, but it’s an even playing field and as long as people know my record is out and it’s coming and I’m able to go into that market and influence that consumer to purchase.

AB: You mentioned you didn’t necessarily like a couple of the albums you did.
KM: Yeah that last album, that wasn’t even me, I got taken out of my zone by my own team. But it is what it is, I’m focusing on Rap-murr-phobia because I put all that behind me, the last three years that I wasn’t out, and I got my mind back right to know what it is that I contribute to the game and what I must do to deliver my unique style of Hip-Hop.

“I went and I threw my phone away. Throw that shit in the garbage.”

AB: I’m wondering, what did you do to get your mind right? I know a lot of people are in a stage of their life where they’re looking to do that.
KM: I went and I threw my phone away. First step, throw that shit in the garbage. You look at it, who’s calling you, a bunch of people that don’t got nothing to say. Go sit down, figure out what you want to do in your life, where you came from, where you at and where you want to go. Surround yourself with positive people that keep you uplifted, not around those who come spread gossip and say what’s the latest bullshit they heard and who died and who got what. No, get yourself right.

AB: How long did it take for you to do all that?
KM: Like three years, but I was doing an album. I was getting my perspectives in order. It wasn’t like I was just sitting there, I was moving and shaking, going on the road, doing shows, going to Europe.

AB: What else have you been up to? You have your mind right, you have your music right, is there anything else you have going on in your life that’s going right?
KM: Man all I do is music and mental elevation. I got my little brother coming out on the Def Squad, he’s crazy, his name is Dee Murray. And this album, I just want em to find the album, because they were like yo Keith Murray’s finished, he ain’t never gonna come back out with a hit record. Boom, hit record. Now they’re like well is it going to sell? Remember, I’m independent. I don’t want to go into numbers because we all know what the numbers are and if you know the independent game you liable to make more money than an artist that is on a major. They red tape you to death. Now that I’m older, experienced in the game more, I see how it’s played. Where’s my core audience at, here and abroad? How do I put them on the same page to get the tape?

“It’s inspiring because I knew all the time in my mind I’m nice!”

AB: You mentioned people said Murray’s done. How does it feel to hear that or read that? Is it depressing or is it inspiring?
KM: It’s inspiring because I knew all the time in my mind I’m nice! They never stopped to think is it his ability to rhyme or is it his ability to get a smooth run? They don’t care, they’re stupid, and half of them don’t know. When I’m in the streets they ask me for the album all the time. For the last hiatus I was on it was like yo when you coming? That’s the inspiration that shows me where they’re at. Everybody’s scattered. Nobody don’t know nothing for nothin anyway.

AB: Is there anything else you’d like to add?
KM: This album is not a plaything. Ain’t no shuckin and jivin. Me and Erick went back to basics with this bitch, straight up and down, and I hope that the real people support it so that we can come back and create a platform and come to the shows and see how busy I get on stage.

AB: And don’t call it a comeback, right?
KM: Shit, don’t call it a comeback
I rip ear to ear on peer to peer
Air these pussies out like a pap smear
Bring your best man, I fear no man
I’ll stomp and choke his ass out like he work for Def Jam
Niggaz trying to slow up my projected dough up, but hold up
Must have forget I’m sick, spit bloody acid and vomidated throw up
{*laughing*}