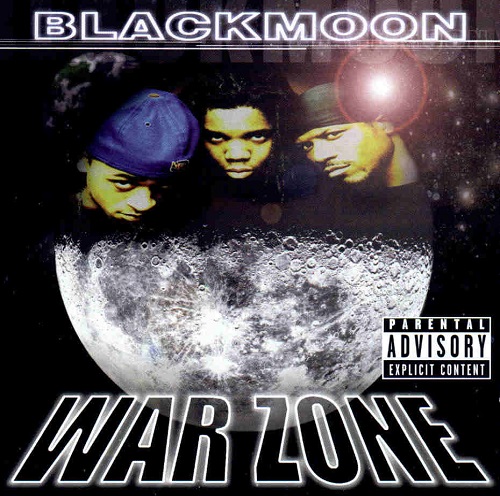 Can you drop a bomb on the hip-hop nation, dip beneath the surface for five years, and rise like a phoenix from the flames to reclaim the game? Black Moon attempts to answer that question with War Zone. Even though both Buck and DJ Evil Dee have been busy with projects from the Boot Camp Clik as well as lacing heads on the radio and the net, heads still wanted that Black Moon LP. Diggin in the Vaults just didn’t cut it, and hearing Buckshot on Funkmaster Flex Vol. 2 just made heads fiend more. Here, at last, is the answer to their question.

And for the most part, the answer to the question is a healthy “Yes they can!” as though Q-Tip had just asked them to kick it. Reuniting with 5 Ft. Accelerator, the reformed heavy hitters of hip-hop take us through a funky blunted out trip of hip-hop: so dope that Buck promises “even if you don’t smoke, you can feel the contact” on “Onslaught”, his duet with Busta Rhymes.

The only really serious mistake that Black Moon makes with this album is to dissapoint their fans by releasing a half-assed version of the title cut after lacing us with the monster jam on Heltah Skeltah’s bonus disc. For some reason, Rock’s fearsome chorus has been replaced by some weak audio samples. It disrupts the flow, ruins the mood, and fucks up the cut. Why? Surely it couldn’t have been sample or vocal clearance – they’re all crew. Rock’s even on the album’s outro. Somebody PLEASE explain this.

Just like a Black Moon album should be, there are a healthy number of hardcore underground rap cuts that will never find a spot on pop radio. “This is What Is Sounds Like (Worldwind)” has a haunting wind melody and mixture of lyrical terror AND homage to hip-hop’s glory. Mr. Walt makes it extra heavy on “For All Y’all” while raining thug queen Heather B provides extra ammunition. “Weight of the World” sounds like a submarine sonar was fed into an SP-1200. And what do you know? Q-Tip *does* kick it; appearing in a duet with Buck on “Showdown”.

If you can find any drawback to this album, it is unfortunately Buckshot. Not lyrically. Buckshot’s sword is still sharp. But somehow, that raw passion found on their debut shot is missing – understandable, but this album sounds “industry” anyway. And the album stays at too much of an even keel – nothing’s really wack, but there are no monster jams on par with Heltah Skeltah’s recent “I Ain’t Havin’ That” on this LP. So ultimately, Black Moon’s return will satisfy the fans who have been so long awaiting their presence on the scene, but it’s unlikely to grab anyone by the throat. As dope as cuts like “One-Two”, “Two Turntables and a Mic”, and “Throw Your Hands in the Air” are, it’s probably not going to blow major. But maybe that’s what Buck wants. Black is back, strictly for the underground. It’s up to the audience to decide if this is good enough to keep Buck in the game, or put him back behind the scenes running Boot Camp.