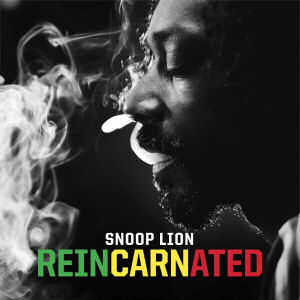 Here’s the story: Snoop took a three-week tour of Jamaica, and it led to a spiritual transformation where he took the Rastafari sacraments, embraced the faith, and changed his name from Dogg to the more noble Lion. He released a documentary, also titled “Reincarnated,” which follows him on his spiritual journey. In the wake of the documentary there has been controversy about how sincere Snoop’s foray into Rastafari culture is. Bunny Wailer, who performed with Bob Marley in the Wailers and appears in “Reincarnated,” has publicly accused Snoop of being a fraud and failing to meet “contractual, moral, and verbal commitments.” So how sincere is Snoop about being a Rasta, and how convincing is his reggae album?

Ultimately, whether or not Snoop is fully committed to Rastafari isn’t really an issue. There have been plenty of non-Jamaicans who have made decent reggae music: the Police, the Clash, fellow LBC residents Sublime, and Diplo, to name four. So long as Snoop is sincere about his interest in Rastafari and reggae music, and adapts reggae to the West Coast gangsta rap he knows best, “Reincarnated” could potentially be a solid album. The problem is that Snoop tries too hard to go native, and his spiritual growth isn’t evident in the lyrics. Sure, they are nominally about positivity, but they also tend to be cliched, shallow, and as half-hearted as Snoop’s alleged lack of commitment to Rastafari. He basically sounds like a 20-year-old stoner discovering Bob Marley for the first time. He also has trouble putting his ego and LBC gangsta persona aside. He opens the album with a spoken word piece saying his goal is to be appreciated as an artist now, before he is dead. Not help his fellow humans find peace or find peace himself, not make the world a better place, not be a better person. No, Snoop’s goal is to make sure people keep buying his albums.

Let’s start with the good news first. “Reincarnated” isn’t a terrible album. There are some genuinely good songs here. The opener, “Rebel Way,” is a nice soulful reggae song, and Snoop’s half-sung lyrics work pretty well. “Here Comes the King” is a great track, and comes closest to realizing the potential of this album. The backing beat is hard-hitting ragga, courtesy of Major Lazer, and Angela Hunte is excellent on the hook. “Lighters Up” is a decent hip-hop/ragga hybrid, with dancehall artists Popcaan and Mavado offering verses. The singles “No Guns Allowed” and “Ashtrays and Heartbreaks” both have some genuinely moving moments, and Miley Cyrus’s voice is so processed on the latter that it could be anyone singing.

However, most of the good songs on this album are strong despite Snoop’s presence, not because of it. He wisely surrounds himself with guests who end up carrying most of the tracks while he’s in the background singing. In fact, he is often more of a liability to the tracks than an asset. Drake’s verses on “No Guns Allowed” give that song its impact and gravity. Snoop’s verses, on the other hand, are totally off the mark. He laments that if only we were all rich, we’d be happy, and then gets into more college stoner platitudes:

“Money makes a man and that’s a crime
If we all were rich, we’d spend more time
With our daughters and sons, they’re losing their minds
We all feel hurt, here’s mine, hear me now”

“Fruit Juice” is Snoop’s attempt to celebrate the Rasta idea of “ital,” meaning healthy food and living. He does this by writing a song about, you guessed it, fruit juice. The riddim, lifted from “Under Me Sleng Teng,” and Mr. Vega’s guest spot can’t save the track from coming off as ridiculous, even if you read it as sexual innuendo:

“Fruit juice
Number one you know me caboose
In my God then with the fruit that they chose
Fruit juice in my glass you know me can’t lose
Take away my worry my stress and my blues
High level natural vibes are what we give in
My princess say she love it when we write pon de rhythm
Natural berry are so very good for the system
Some tart, some sweet, you just can’t resist them Sweet sap, knees berry, cantaloupe, sour soup
Pineapple, mango my taste buds tangle
An ice cold beverage in my honey comb hideout
Chillin with my beautiful empress we a stand out”

Snoop is at his strongest when he is in familiar territory. The Akon cover “Tired of Running” is told from the perspective of a drug dealer weary of being on the wrong side of the law and damaging his community. It’s also the track where he delves into rap-inflected R&B singing, which comes much more naturally to him than his attempts at singing in a half-patois. Two decades into a career, Snoop is still a great rapper, but he doesn’t even bother doing it on “Reincarnated.”

Major Lazer, Diplo’s dancehall alter-ego, co-produced most of the tracks on the albums, working alongside other Jamaican producers like Dre Skull and Ariel Rechtshaid. He does a mix of R&B, hip-hop, contemporary reggae, and ragga. The signature Major Lazer take on ragga is only evident on a few tracks, including “Here Comes the King,” “Fruit Juice,” Torn Apart” and “Get Away.” “Get Away” recycles Major Lazer’s “Pon Di Floor,” which was already re-used by Beyonce. Has Diplo really run out ideas already?

“The Good Good” has a nice message, but indulges in the sappiest, cheesiest elements of contemporary reggaeâ€”corny acoustic guitars, alto sax solos, and other smooth jazz sylings. “So Long” likewise is too cheesy and sappy for its own good. “Ashtrays and Heartbreaks” is actually a decent pop song that Miley Cyrus doesn’t mess up, largely because her voice is so processed that it could be anybody. The “Deluxe Version” of the album includes several solid bonus tracks, including “Boulevard,” “Remedy,” and “Hard Times.”

Snoop has compared himself to a reincarnated Bob Marley, which is where the album gets its title. That’s further evidence of Snoop’s arrogance and cluelessness about reggae music and culture. There are have been numerous singers keeping the tradition of positive reggae music alive since Bob Marley’s untimely death in 1981. Sure, none of them have approached Marley’s genius and international fame, but then few singer/songwriters have come close to Bob Dylan’s or Biggie’s genius and success either. An outsider like Snoop claiming to be the second coming of Bob Marley is a little bit like if a British rapper claimed to be the second coming of Tupac, as if there haven’t been any rappers who mixed positive messages with a West Coast gangsta vibe since 1997. It just shows that Snoop hasn’t done his homework.

“Reincarnated” works to some extent as a collaboration between Major Lazer and other Jamaican producers, songwriters, and singers. It is not successful as a Snoop album. He’s not convincing as a reggae singer, and struggles to adapt his tone and approach to his newly adopted genre. Had he gone for a Nas/Damien Marley type collabo, where he rapped over reggae beats, “Reincarnated” could have been a much better project. As it stands, the album has some decent songs but doesn’t hold together as an album.