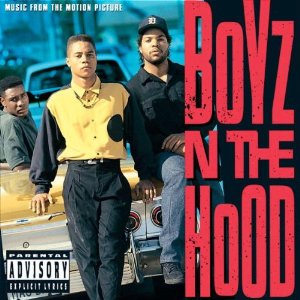 When John Singleton’s landmark film, “Boyz n the Hood” was released, I was about a month away from entering my double digits of age. I wasn’t old enough to comprehend everything that went down in the movie, but even at that young age, I knew I liked violence and profanity. It’s a bit interesting, now that I look back at it, but nevertheless, I found myself attracted to the movie and soundtrack largely because of Ice Cube, who was the biggest rap star I had heard of back then. Somehow, I got my hands on the old NWA tapes and Cube’s solo debut album, “AmeriKKKa’s Most Wanted,” and went into a frenzy. I remember asking my mother to buy the soundtrack for me, and she did, without question. She never paid attention to the Parental Advisory labels, so usually when I asked for something, she’d go to Camelot Music and pick it up for me. I was never bold enough to ask her to pick me up a Too Short album, I wasn’t that dumb. The soundtrack is made up of an interesting blend of hip-hop, R&B and even a touch of jazz, but back then I was only interested in a handful of songs. Cube’s “How to Survive in South Central,” Too Short’s “It’s Your Life,” and Compton’s Most Wanted’s “Growin’ Up In The Hood.” Other hip-hop acts featured on the soundtrack include Kam, Main Source, 2 Live Crew, Yo-Yo, Monie Love and Chubb Rock who makes a cameo on Tevin Campbell’s “Just Ask Me To.”

Other R&B contributions include Hi-Five’s “Too Young,” Force One Network’s “Spirit (Does Anybody Care)” and Tony! Toni! Tone!’s ever-popular, “Me & You.” The soundtrack closes out strongly with Quincy Jones’ “Setembro” and Stanley Clarke’s “Black on Black Crime,” but it’s the hip-hop that dominates most of the album in terms of real estate. Ice Cube’s “How to Survive in South Central” is a sample-heavy guided tour through South Central that advises the listener to stay strapped, not to wear any blue or red and even makes it a point to mention that “the strong even die…in South Central”, complete with the Tom Brokaw “This is Los Angeles” vocal sample. Yo-Yo reflects on her childhood as she reminds us that “Mama Don’t Take No Mess.” Main Source’s “Just A Friendly Game of Baseball (Remix)” allows Large Professor to metaphorically compare police brutality to the game affectionately known as America’s favorite pastime. Kam’s “Every Single Weekend” touches on how everything and everyone flips the script for two days out of the week. According to West Coast Kam, the ones that are punks during the week become “weekend warriors” and the broke people become rental car ballers. In one of his more positive songs (which he NEVER gets credit for, by the way), Too Short takes a P-Funk sample along with a line from his own “Life Is…Too Short” and gives a few tips about making the right choices in life, and even closes the song out with a call to increase the peace: “We’ve got to stop the killing sometime.” The song that put me on to Compton’s Most Wanted and MC Eiht specifically was “Growin’ Up In The Hood.” The cuts, the Joe Simon sample, the bravado…all easily help to make the track one of the standouts here, as MC Eiht raps:

“Growin’ up in the hood. Yeah boy, 1984
Was the year my peers didn’t know what was in store
A little hardhead kid came of age
Time to pay my dues, learn the tricks of the trade
And at home, it’s the same ass story
Moms treat me like she don’t even know me
But my younger brother’s got much clout
I can’t take this shit, so I bones the hell out
And run with a pack of wicked muthafuckas
No shorts are taken, we down Black brothas
A little nigga with no problems at all
Fucked up and killed my first 8-Ball
Quick off the porch. so little sucka stop lookin’
Stagger to the house so I can collect my whuppin’
But watch out cause a little nigga’s up to no good
Growin’ up in the hood”

Nowadays, we’re in an age where putting songs on a soundtrack has in some cases become part of the music business model, whether it’s to break an artist, use would-be throwaway songs, etc, I believe that most, if not all of the songs on the “Boyz n the Hood” soundtrack were heard at some point in the movie. Not only was the assortment of songs good for giving the soundtrack some variety, but they were also well placed in the film and added to the almost universal praise that the movie has garnered throughout the years. One of the more famous lines was dictated by Cube’s character, Doughboy, who remarked: “Either they don’t know, don’t show or don’t care about what’s goin’ on in the hood.” The soundtrack makes for an exceptional starting point and companion piece that’s slightly dated but still manages to hold its own, nearly twenty years after its initial release.