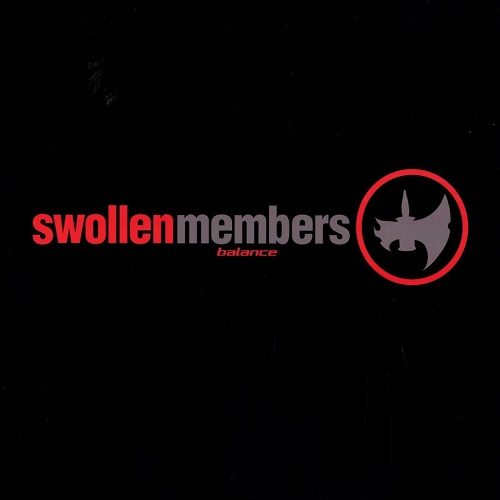 After dropping a few ear-catching 12 inches, the hip hop collective of the Swollen Members – Madchild, and Prevail, the MC’s and Zodak the DJ/Graf writer (DOPE!) – brings forth from the underground a debut album where for once, a lot of guest appearances aren’t irritating and overbearing, but blend and fit nicely in the mix. I mean, the guest lineup boasts varied mc’s and dj’s like Del, Evidence from the dope-ass Dilated Peoples, Divine Styler, Everlast, Mixmaster Mike, Kutmasta Kurt, Saafir and underground lovechild Aceyalone. And the best part is that Swollen Members are not consistently outshined on this LP, either, as is usually the case when guest mc’s show up.

The first track, “Groundbreaking,” plings into existence with a dark piano loop, tripping over itself. A low chorus moans in, and the beat drops, Kool DJ EQ cuttin shit up at the same time. Instant head nod. Dark rhymes are the order, as the chorus asks “What are you afraid of? To wake up and find this is what dreams are made of?”

“Strength” brings more of the same, with another piano loop that Mobb Deep would nut over. This doesn’t give that repetitive, “Again?” vibe, as the beat is flipped by the Alchemist enough to distance it from the prior cut. A brag track laced with nasty visuals, the head is still nodding involuntary.

Ahhh, “Lady Venom.” This beat fuckin knocks hard. Simple chopped up sample and rough drums by Paul Nice back up the S&M type nice, and Prevail just comes raw, droppin lines like, “My jaws of life the cause of death, my breath swings the wreckin ball.” The chorus is a wordless chant, melodic but eerie.

“Front Street” hits with it’s horns and flute loops and faster beats by Alchemist. The chorus orders to “Turn the volume up a notch, we pump beats” No shit. Can’t help but follow orders. “Bless and Destroy” lives up to it’s title, as the nasty, dirty, dusty and crunchy drums rock under the best use of a piano on the album. Zodak does his best to bless, with sweet cuts in the chorus, as Madchild and Prevail destroy mc’s. Head’s gone from nodding to snapping back and forth.

Evidence is all over “Counter Parts” producin and emceein on the track. The beat doesn’t carry the energy over from the prior tracks, though, and is kinda blah in comparison. Kut Masta Kurt lays a couple pedestrian scratches over the beat, as Dilated and Swollen bounce off each other effortlessly. Simply okay, in comparison to the rest of the cuts. “Circuit Breaker” follows with swelling strings and a slow ridin drum beat, for Madchild to string more darkly visual lyrics over, replete with crushed skulls and infernos. The chorus isn’t anything special, though, and the track equals the okay feel of the one that preceded it.

A rising howl greets the listener at the beginning of “Out of Range,” swelling into a vocal hit over more savage drums by Zodak. “Beware the swirling current of blood curling the turret,” Madchild warns, in another gothic rhyme. This would be getting tedious if he wasn’t pulling it off so damn well. A dancing acoustic guitar riff accentuates, and Zodak’s mad cutting punctuates another fat cut.

And then the superfat posse cut, “Bottle Rocket,” featuring Divine Styler, Everlast and Evidence comes on. This cut had me when I first heard it on a mixtape a few months ago. Evidence’s mellow beats rides nicely, and the MC’s all handle themselves respectfully, even Everlast. Unfortunately, “Assault and Battery” doesn’t come close to holding the attention. Maybe it’s the irritating guitar loop, or the even more irritating bassline, but Zodak’s beat is some fast forward material here. Madchild and Prevail try to keep you hooked, but there’s only so much you can do… fast forward.

“Valentine’s Day Massacre” follows up, a group cut featuring Thirdrail Vic, Big Nous and Saafir. Saafir busts nicest over the amiable beat by Kemo, while the other MC’s hold steady with brag raps, and DJ Science twiddles the fader. Nice, but not quite livin up to the rest of the album.

And then a funky little loop pops up, startin up the headnodding once again. A voice comes on, stating “Del said all weak emcees are about to get ate right now. Peep.” And he follows up on that statement to the fullest, sparking off “Left Field.” He did the bangin ass beat too, and proves once again that you CAN’T FUCK WITH DEL. Add Mixmaster Mike on the mind-bending cut and probably the tightest delivery by Madchild, hot lyricals from Prevail, not to mention the startling appearance of upstart Unicron. He reminds me of a younger, hungrier Del, which is nowhere near a bad thing. This track gets the rewind treatment most definitely.

Alchemist follows next with the haunting strings and fat drum beats of “Horrified Nights,” the fiercest battle track the Members drop on the album. “The next to try to tango / with Madchild, will get worked from every angle / I dismantle and handle with chaos and mayhem / and cold rock a party until the A.M.” The chorus, a pieced together string of samples (copyright DJ Premier) fits perfectly and graduates the track from neck snapper to head banger.

“Battle Axe Experiment” is just plain fuckin ROUGH. Almost all beat, with scratch hits for dynamics. The snare slaps eardrums silly, and the kick thumps your chest, as Evidence and Madchild trade angry lyrics and more nasty visuals. Zodak closes out the experiment with more dope skratch skills. Makes me wish for more trips to the lab.

The lone smooth beat on the album, a slow riding chunk of butter shit courtesy of Evidence, “Consumption” showcases Aceyalone’s conversational flow, alongside Madchild’s musings that “the fascination of the infinite consumes me…” While that may sound like some out there mystical “space shit,” trust that it isn’t. It’s a relaxing ride through some fat-ass lyrics. The vibe don’t last long, as Paul Nice beats your eardrums the fuck up with another chopped up headcracker, “Sinful Bliss.” Whoever Nice is, I want more. This cut closes out the album in fat style, chorus repeating “Underground forever! Sinful bliss…”

Do the Swollen Members get the Rookie of the Year award for ’99? They better be in the running. This debut LP is easily fading most established rappers efforts by a long margin. Sure, it stumbles here and there, and Madchild’s visual imagery can get redundant at times, but the consistent dopeness of the beats, and overall vibe of the album override that. Pick it up, bump it in your car, throw a couple jams on at a party. It may feel like “Sinful Bliss,” but fuck it, it feels good, don’t it?