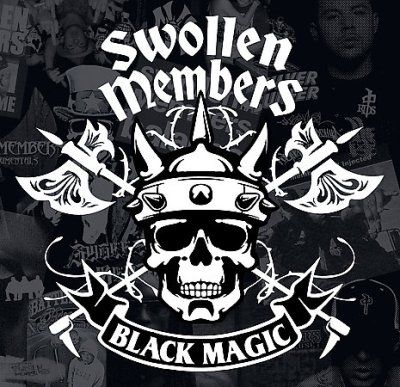 Swollen Members are responsible for one of my all time favorite songs, “Breathe.” The electro-inspired track can consistently be found stuck on repeat on my MP3 player. Through the wonders of iTunes, I am able to say that aside from that one track I haven’t heard anything else from Swollen Members. It’s an error on my behalf since I’ve been hearing about the underground group for years, but thankfully I’ve redeemed myself by peeping their latest release. “Black Magic” looks like a great album. I say this just to be able to point out that the title, track listing, great cover art, and digipak packaging make for great presentation. For some acts, great presentation is a ploy to try to hide not so great product, but for Swollen Members the packaging doesn’t even come close to capturing the dopeness of their music.

At first glance Swollen Members looks like a horrorcore act. That wouldn’t be bad as I’m a big fan of horrorcore (Memphis horrorcore, a little Brotha Lynch Hung, and a little Esham), but in reality despite the dark theme to their albums the group is just a normal rap group. I don’t mean that as an insult, as the group uses dark themes as metaphors instead of going for the shock-rap route. With a title like “Torture” one would expect a dark track, but instead Rob The Viking comes through with an up-tempo beat and the crew does unleash a form of torture, but the word is a metaphor for the dope lyrics dropped by the crew along with Casual. “So Deadly” follows and has a similar theme as Evidence comes through with a darker track, but once again the only “scary” thing about the track is the dope lyrics. Overall, the crew does have a darker outlook on things, but they are much more uptempo and uplifting than the cover art would lead on. “Darkclouds” proves this point as Madchild spits:

“Dark clouds are hanging all around
I keep trying to pick myself up but I keep falling down
Sometimes I can’t even get out of my bed
Thinking about the night before and stupid shit that I said
It’s at the point that I’m focused on hibernation
Less interaction with people, less complication
Alcohol and altercations
Tylenol and conversations
I’ll be falling off the face of the earth if I don’t change
What’s the fucking point of upping my work if it’s all pain
And shame, going insane while basically in my prime
Can I rediscover my mind, are we wasting each other’s time?
I don’t cry, I don’t look up in the sky and ask why
But sometimes I feel like I’m patiently waiting to die
Go through the motions, try to put the pen and paper with love
But I’m still holding back afraid of what I’m capable of”

Evidence comes through once again and provides a dope beat with soft piano keys and soulful vocal samples. The track is dark, but nowhere near the level that one would expect. I only focus on the darkness of the album to ensure that hardcore horrorcore fans don’t pick this up expecting some horror movie recreations and more importantly so that rap fans won’t be put off thinking this album is something they can’t relate to.

Of course, I could have foregone my entire previous paragraph by simply stating the fact that “Black Magic” is a dope album with dope music that will be enjoyed by ANY rap fan. The production is top notch. When group producer Rob The Viking takes a break it only makes room for superstar producers like Evidence and Alchemist to bless the track. Alchemist’s joint, “Weight,” is also noteworthy because Ghostface Killah shows some continental love with a verse that makes you wonder how a rapper stays consistently hot for so long. Even the “unknown” producers bring the heat on this one, especially Double Dragon on “Brothers.” Madchild and Prevail use the emotional backdrop to give us a short history of the group and the trials and tribulations undergone by them, it’s a perfect track for someone such as myself who was not as familiar with the group.

I’d list other tracks to peep, but quite frankly you should just cop the album and peep everything. There are a few tracks that everyone won’t feel. The reggae influence weed anthem “Dynamite” will probably best be played when playing simon says, but otherwise the crew comes through consistently solid. It’s probably the best “underground” album I’ve peeped this year next to JMT’s latest, and that’s saying a lot about “Black Magic.” While the crew has a lot going against it (being labeled underground and coming out of Canada), with music like this it’s not surprising Swollen Members is Canada’s best selling rap act. Given the elite cast of guest stars, it’s clear the crew has already made its mark in the U.S., but this album is sure to win them even more fans.