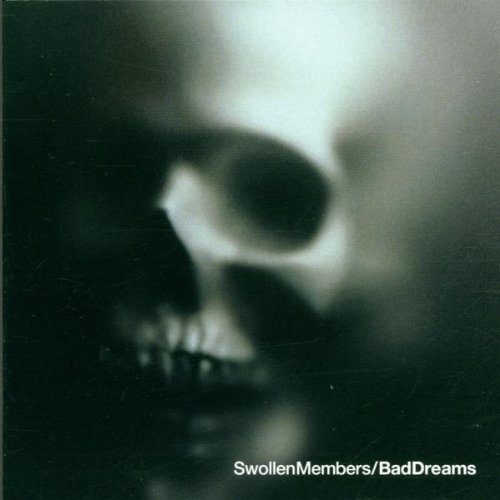 Categories. They suck. But I’m quick to put people in categories if they ask for it. It’s evident that Vancouver’s Swollen Members associate themselves with the post-gangsta rap Left Coast scene that harbors a variety of groups from Tha Liks to Blackalicious. Their label’s “Defenders of the Underworld” compilation from a few years ago already suggested that connection. In fact, the two rappers first met in San Franscisco while making early moves on the hip-hop scene. And now they’re following up their Juno-awarded “Balance” debut.

The cover is really the first impression that a record gives off. No need to discuss the many fat and the equally numerous wack album artworks hip-hop has produced. Hit up your local record dealer for an object lesson. When I’m presented with an telling front cover like that of “Bad Dreams” (a human skull emerging out of a dark and dusty background, with the group and album name written below in simple lettering), I certainly expect the music to connect on some level with the sleeve. However, “Bad Dreams” doesn’t give me bad dreams nor does it sound like any for the most part. This is basic hip-hop, sometimes a little bit too basic. Mad Child and Prevail spend the first 15 minutes of their album teaming up with people like Iriscience, Evidence and Chali 2na shadowboxing the same old imaginary MC opponent. They nearly knock themselves out doing it. I’ve rarely heard a rapper sound less motivated than Prevail in “Full Contact” when he drawls, “My life consists of making songs / of quality controlling, balancing on platforms / The space between is an end to the means / My name on your lips, my face in your dreams / Extreme’s a term not limited just to sports / it also derives from how I drive this force” in the most lethargic manner. No wonder the generally more animated Mad Child outshines him with just one double bar: “S&M rocks the spot? No question / You’re so wack, even your yes men got suggestions.”

There’s this great underground song by Ultramagnetic MC’s called “Bring it Down to Earth” where Kool Keith vows at the start of the song to “give the people something they can understand, something not too complicated,” only to instantly switch back to their usual spaced out steez once he starts rapping. Swollen Members set up “Take it Back” in a similar fashion as Mad Child promises not to “talk about dungeons and dragons all the time.” While Ultra were predictable at being unpredictable, Swollen Members put only half their hearts in it. That means you get some ‘dungeons & dragons’ as well as some basic MC bashing:

“Eh yo, we all get older, rhymes get bolder
Series of events makes the heart grow colder
Started off with 2, now we got mad soldiers
Battle Axe warriors, bitch, I thought I told ya
Heinekens on stage, never rock shows sober
Spit venom of a cobra, hatched in October
cause, Libra, Scorpion is taking over
Still the Silver Surfer, I ain’t trippin’ on Nova
Introducin’ Mad Child, ladies and gentlemen
let’s give a big round of applause for adrenalin
You ain’t right, a fuckin’ phantom at night
that wears a mask by day, with a temper tantrum, don’t light
my fuse, cause if this dynamite blows up in your face
there won’t be no one left to clean up the place
Swollen Members adds up to one thing, and you can quote this
temporary relief for the hopeless”

I quote it, but I don’t necessarily agree with it. It’s when Swollen Members face their inner demons instead of some unknown opponent that they bring a special quality to the turntable. The Alchemist-produced title track evokes the same dreamy-borderline-nightmarish sound that Muggs of Cypress Hill invented in the ’90s. Prevail:

“Bad dreams will find you, confine you to circles
Every other movement is slowed by your mind
That’s why stabbin’ ’em blind is no crime
With no REM you’re bound to cave in
and life in the conscious life is quite grim
If I can’t escape then I’ll die in my sleep
cause the cliff is too steep and the water’s too deep”

His partner in rhyme manages to tone his sometimes indeed childish voice down to a whisper, tossing and turning just the same:

“I get in fights every night as I’m reflectin’
Throwin’ punches fast, hard as I can but not connectin’
They’re protected by a force field, locked in an engagement
Still I see the color red when poundin’ heads into the pavement
Caught up in a chase scene or workin’ on a plan
Sometimes I’m fallin’ and I have to wake up before I land
Lots of doors to open, afraid what I might find
My girlfriend gettin’ fucked with eight more guys in line
Can’t wait to rise and shine when ill thoughts are provoked
(Shane, wake up!) My girlfriend’s right beside me gettin’ choked
in real life; plus I heard it could get worse
So much for walkin’ in my sleep – that’s close to murder in the first”

Unfortunately, they go back to the mediocre, with the sand-table excercise “Camouflage”, the card-club get-together “Poker Face” or the night shift theme “Deep End”. It’s when Swollen Members let their rhyme animals run wild that their album title prophecy fulfills itself. Don’t expect “Anthrax Island” to make reference to recent events, but expect a killer bassline taking the rappers for a ride to hell and back. That’s more like it – ‘bad dreams’, that is. The mystery night train comes to an unsuspected halt with “Snake Bite” where a guitar plays the lead in a folky tale featuring two characters named Rattlesnake Jones and Chris Guy. This is way beyond what Swollen Members have presented so far on this album. They bring back their special brand of boom bap on “Total Package”, produced by Evidence, featuring Planet Asia. There’s really something for anybody on here as they even settle their internal differences in public. “Ventilate” has them bumping heads with each other, the-one-is-as-bad-as-the-other-style, just to make ammends in the last verse:

“Alright look, where was I back three years ago? – Mininum wage?
That’s right, and where we at now? – Yeah, different page
OK, what’s the significance of the point I’m tryin’ to make?
We sound magnificient together – so let’s drop this whole debate
(How many states?) Not many (How many countries?) Plenty
(How old are both of y’all?) Let’s just say we’re in our twenties
(How’d you come up with the name Swollen Members?) Drunk at Denny’s
(Any last words?) Step up and you’ll get kicked to the curb
We’re strippin’ your verse, we’re rippin, you’re a victim of words
We’re both putting in work tryin’ to get what we deserve”

What follows are some more cuts testifying of their experience (“Burns and Scars” w/ Son Doobie, “Dark Riders” w/ Buc Fifty). Kemo (of the Rascalz) comes with what may be the most innovative track as he reshapes a very familiar organ melody for “Fuel Injected” while longtime affiliate and labelmate Moka Only provides the hook and the rappers engage in the type of self-motivation that may NOT be that interesting to the listener unless he/she really identifies with the group.

Not being too familiar with their previous output and their current position in the rap race, I can’t tell if Swollen Members will lose old fans or gain any new ones with this here release. But if they continue on their “High Road” (the near brilliant closing cut produced by Rob The Viking), meaning evolve from where they’re at now, then any success will be well deserved. On my strictly personal ‘scale of satisfaction’ within the peculiar category Swollen Members put themselves in, somewhere in the mid-region would be Dilated Peoples and a few notable notches below them would be Swollen Members. Mad Child and Prevail are the Canadian version of the Cali Agents: it sounds like a good idea, but it’s never fully realized.