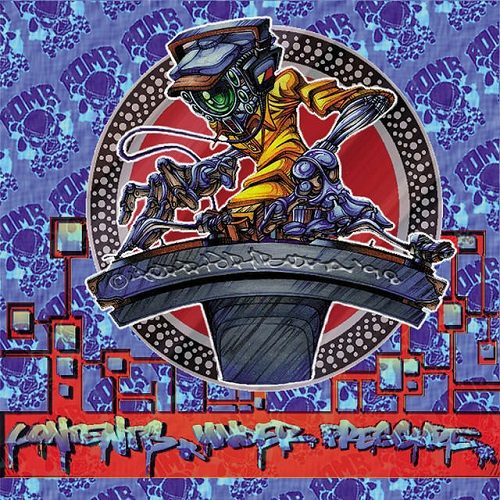 To keep with the current Turntablist movement, Bomb Hip-Hop has put out yet another compilation in order to try to contact beings from outer space. The requirement to make it onto this compilation must have been to use spaceship futuristic type sounds. Seriously, every track has those Star Trek phaser gun/transporter/alien sounds. It has a tendency to get annoying after a while. Aside from that, it was a nice compilation. Very easy to listen to, even non-DJs can get into it. An eclectic collection with mellow beats, a few up-tempo tracks and even a couple of true Turntablist tracks with advanced listeners.

The production was good, better than average, but not mind blowing. The samples, for the most part, were used in a very creative way. On “Car Chase”, I found myself wondering if the sample was from the 007 video game. Hey I think it is! That was damn creative if you ask me, It was very electro sounding, but still very original. And it did make me feel like I was in a car chase.

The only track on the comp with an MC is “The Grateful Dread” by 7th Plague. The beat was slow but funky and I enjoyed the MCs attempt to show his varied tonal abilities. Plus it was a funny song. He can “expand like the elastic on underwear”. Another lovely line was, “You miserable vomitous mass of filthy mass of muck”. Oh boy! I also appreciated the change up in the beat in a few different spots throughout the song. I was cracking up on this one.

“DOA” was a very dark and dreary sound. I felt like I was in a funeral precession. They also could have done with out the vocalist; as little as she did on it.

“Alea Iacta Est” uses the standard hip-hop formula. Use a whole bunch of samples of old school classics and mix them up on top of classic old school beats. I say if you’re going to use stuff that’s been used to death, you better do something special with them. Half-way through the song, there was a short change up, but then moved back into the “Ugly People be Quiet” beat. What can I say, it bored me.

“Praise the Wheels of Steel” by DJ Wrecka was my favorite track on this comp. See, now that’s how you flip samples and breaks. I never heard anyone scratch “prrrrt stick ’em” like that before. An up-tempo beat with well-developed scratch patterns. This was a highly enjoyable hyped up track.

The final cut, “Abduction & Analysis” with DJ T-Rock & DJ Faust is another track Turntablists will appreciate. Incredible drumming and advanced scratch patterns are something I’ve some to expect from Faust. With an intro that includes a break down of what Aliens are “telepathically responsive to” and a beat that is steady yet far from monotonous, it is a great exit out of the Alien realm and back to the world of earthlings reminding us that “further analysis of this subject is necessary”.

Overall, I would say that it had a few exceptional songs, but I guess I expected a little more from this comp than what I got.