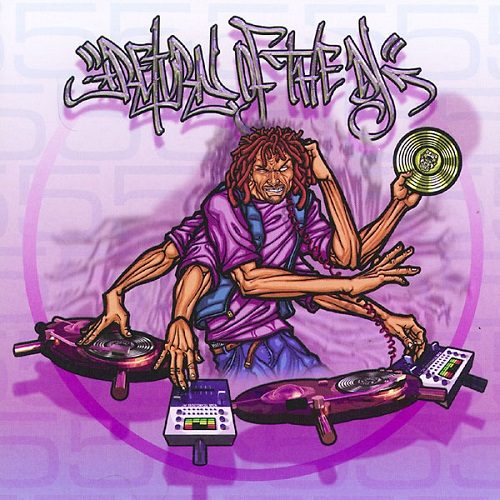 Clockwork. The circling of a fine record under a needle. Clockwork. The passing of a hand around the dial to count time. In hip-hop, these things often work in tandem. In Bomb Hip-Hop, these things seem to come into sync every two years with the release of a new “Return of the DJ” album. Turntablism is not overlooked in the interim of course, because there are fine organizations like the Temple of Hip-Hop and the DMC World Championships which help keep the lifeblood flowing, and artists like DJ Q-Bert and The X-Ecutioners

constantly spreading the gospel of stylus to vinyl through music like Jehovah’s Witnesses door to door. Still, when a new “Return of the DJ” volume hits stores, it’s like an affirmation to the faithful who still believe hip-hop is more than just a man on the mic, who believe in all of the elements – beatboxing, visual arts (graffiti), b-boying (breakdancing) and the Grandmaster like Flash of them all, the turntable.

For those who don’t follow turntablism, this record will slip quietly under the radar. For those reading this review however, the noise will be as loud as the ’89 Skratch Gangstaz (DJ Pone and Snayk Eyez) giving us their “Director’s Cut.” You might presume that turntablism a.k.a. “deejaying” or “scratching” is the art of providing a fresh sample for the hook of a song, producing a fat beat for a track, or both. If you’ve been following DJ Premier for years, those would be natural assumptions. What a “turntablist” does though is both of these things, and more. The aforementioned track is an ideal example. In representing Fairfield and Vallejo, these California wizards have assembled a comical montage which is both a tribute to and spoof of the Governor-elect Arnold Schwarzenegger. With their records and their skills, they create multiple layers of sonic sounds. Swift hands moving back and forth make up the beat, make up the music, punctuate the clever samples, and build up a stellar song. Without giving away which Schwarzenegger samples are used in the process, suffice it to say they are rearranged in a way that will make you want to reconsider activites like driving while listening – you may swerve off the road. As they carry you away to the ambulance though, you’ll still hear the dope beat in your head, and Ah-nuld’s voice quipping “chill out dickwad” and “fuck you, asshole.”

Even though the Technics 1200 has been recognized as a musical instrument by even the most un-hip of stodgied musical academians by now, it’s still a profound revelation to hear them arranged in symphonic harmony like this. Any single DJ with the technical skills can turn two turntables into the excellence of execution, but when a group of them get together like Timestretch, DJ Nerve and Trouble B do on “Panic,” it’s one hell of a mindfuck. The bass line in the background builds constant tension, the DJ’s trade back and forth showing their ability to split sounds into composite elements, and when Busta Rhymes quips “it ain’t motherfuckin SAFE no more” you’re damn sure ready to believe him. While the track itself showcases DJ unity across the Atlantic from Canada to the United Kingdom, “Vol. V” is even more global than that. “Disc Duel” featured DJ Hype and his Phaderheadz co-horts representing Berlin, Germany on an ill track that pays tribute to everything from 1980’s hip-hop to classic video games like Pac-Man and Castlevania. DJ Astro busts out some hard rock guitars on “Hate Me,” representing the unlikely mecca of Fort Collins, Colorado. The “Quattro Respirato” brings fine Japanese styles to the ears courtesy Azzurro and Hashim B, by way of Shibuya, Tokyo. New York wasn’t left out though. DJ JS1 busts off banging beats and serious anger over “weak beats and corny producers” through “Ventilation,” a song proudly sampling the Daddy-O line, “we just did it – created a song with no bullshit in it!”

No matter where the representatives come from though, the only thing that’s important is that they REPRESENT. For the most part the turntablists selected for inclusion in “Return of the DJ” editions do, and artisans like DJ Shortfuse, Alien Army and DJ T-Rock are no exception. Some of them have made a name for themselves through competitive turntablism, some of them have made a name for themselves with their music, but without a doubt they all rock the soundset. Picking favorites on an album like this is harder than quantum physics, but songs like “1-8-7” by DJ Marvel are guaranteed crowd favorites, as the magician mixes new words and MC’s like Big Daddy Kane and Ice Cube into that old Dr. Dre and Snoop Dogg classic. On the other hand, experimental songs like “Recognize” by the Fingerbangerz take the sound into a futuristic world previously only inhabited by insane space aliens like Dr. Octagon and Dan the Automator. Whether you “Catch Wreck” with the Jazz Addixx or take “The Old School Day Trip” with DJ X-Rated, you can’t go wrong with the fifth installment of “Return of the DJ.” Skillful DJ’s lift breaks, beats, words, and previously unheard sounds and create new worlds for music to inhabit; this album will lift you straight off terra firma and take you into their orbit. If you don’t cop any other DJ albums in 2003, you should at least cop this one.