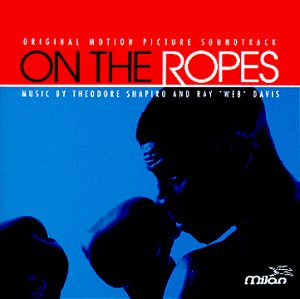 Various Artists :: On the Ropes Soundtrack

This is a fluke. I had never heard of this movie or Milan Records; and yet this is an entire hip-hop soundtrack, punctuated with interludes from the film. How did this slip below the radar? I wouldn’t even have this album except I won it free as a doorprize at a picnic – I ain’t bullshittin! That’s how I got put On the Ropes.

So how does the unknown in the ring stack up against the heavyweight contenders? Sometimes it packs a heavy punch, sometimes it just looks like a bad amateur trying to switch up and go southpaw. The title track by Darcmind (you may remember him from the “Soul in the Hole” soundtrack) featuring Vultcha is not really stunning lyrically but works thanks to Darc’s voice and a beat which does make you feel PUNCHY. It jabs you again and again with fat bass. Unfortunately Vultcha’s follow-up track “Brand New Day” sounds like a misguided mixture of Bushwick Bill’s “Ever So Cleer” and Ahmad’s “Back in the Day”.

The almost spoken word stylings of Be Wise are more promising on “Street Thugs”. Very schmoove. Again the tempo is completely changed by the following track, “Me Verse Me” and not in a good way. This ode to self-confidence by KD and Vultcha (featuring Pebbles) seems like a bad DJ Premier track with one of those seminal rappers he seems to hook up with now and then for no apparent reason.

Ironically, one of the best songs isn’t a song at all – it’s the 38 second long interlude “Brain Damage” which features one of the best beats you’ll hear on the whole thing and a rather disturbing message from a pro fighter who says he’s “willing to take that chance”. Sure we all like to watch people like Roy Jones Jr. duke it out in the “Gentlemen’s Sport” but how many of us think about the fact that many fighters will eventually end up like Muhammad Ali? And Ali was the +original+ rapper.

This album seems to have trouble finding direction – as soon as you get a snappy song like “Step in the Square” by B Stone you get another misguided “hood anthem” like KD’s “No Bullshit”. Most disturbing would be underground hero MF Doom’s “New Beginning”. Even back when he was Zev Love X with KMD he never kicked ANYTHING to a beat that was this fruity. Sure it’s worth listening to for his rap (albiet very brief) before Scott Free takes over, but damn it’s just fucked up. Then the all-star “Anti-Gravity” just takes it to a new level of stupidity – a remix of “Brand New Day” of sorts. Again MF Doom offers the only salvation despite the fucked up beat.

So go figure – it’s a whole album of hip-hop meets the boxing ring, but it can’t seem to decide whether this group of mostly unknowns can land a HARD punch to the jaw or just jab at the midriff and clench for twelve rounds. This indecisiveness results in a highly unsatisfying split decision and makes you wish they had stuck to the uptempo punches instead of trying to make it pretty.