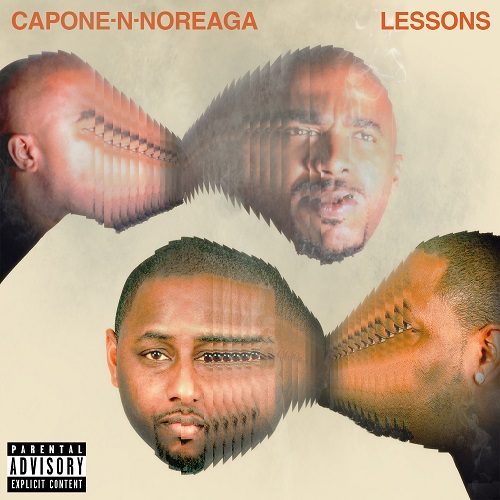 They did it. Capone-N-Noreaga decided to have Tragedy Khadafi help with their latest album “Lessons”, which should probably be called “Lessons Learnt”. His influence on their debut album “The War Report” was clear, and thankfully it’s lent their new record a more consistent, less commercial feel that undermined their last two albums “Channel 10” and “The War Report 2”.

Capone and Noreaga both possess renewed hunger in their bellies on the opener “Future”, which feels like an M.O.P. track thanks to Tragedy Khadafi’s ferocious presence between verses. The album certainly has a harder edge to some of the guys’ previous albums, although there are still some questionable instrumentals thrown in that jar the flow â€“ “Shooters Worldwide” sounds like a club banger from ten years ago.

Amidst all the braggadocio and tongue-in-cheek humor, Noreaga delivers a standout track with “7 Continents”, as he talks about being referred to as an “OG”, only because he’s old. Even if he’s happy with being an OG in terms of the respect such a title possesses, the ‘old’ part of it bugs him. It reminds us why Noreaga (on his day) can deliver great rap music, but in typical Noreaga fashion he throws a ludicrous line in to the mix. His claim to have been to seven continents is admirable, considering this would include Antarctica. Maybe there was a one-off tour date there in the late 90s or something.

Noreaga displays his racist side on “Chinese Girl”, as he tells of how he invites his Chinese bitch out for sake and sushi. He also drops the dog-eating stereotype of South Koreans in there too, which admittedly is typical Noreaga. The song is effectively endless stereotypes, occasionally used in smart pieces of wordplay (mostly by Capone) – “She was all that, and Dim Sum”, “She gave me dome in the whip, what a happy ending” etc. The end of the album is where much of the best songs reside (minus “Pizza” with its awful hook). “Now” is classic Statik Selektah, as he laces a nostalgic beat for the duo to declare how proud they are of what they’ve become. “Riding” is a decent cut but ends up as a “dope beat, weak hook” combination that is largely avoided on “Lessons”. The best track is saved until the end, the Scram Jones produced “Foul 120” featuring Raekwon and Tragedy Khadafi, a satisfying slice of New York Hip-Hop that will get your head slamming.

“Lessons” contains some disappointing songs however, the most obvious being “3 on 3”. It’s The L.O.X. vs. CNN and Tragedy, but the production is so underwhelming, and the verses vary in quality to the point of Sheek Louch sounding the best of all six. It’s even more noticeable due to its positioning before a Statik Selektah production (and then a Large Professor one). The aforementioned “Pizza” is an ill-judged comparison of beautiful women to juice and pizza with a throwaway Large Pro instrumental too.

Noreaga’s outlandish, often daft rhymes have always been the perfect foil to Capone’s straight-faced gangster, and the chemistry remains for all to hear. Despite Noreaga stealing much of the album, Capone holds it down. His voice remains one of the most distinct and recognizable in Hip-Hop, and he delivers some comedic lines himself. The presence of Tragedy Khadafi isn’t that noticeable in the grand scheme of things, but considering the lyrical performance is arguably their best since 1997’s “The War Report” (minus the shocking “Chinese Girl”), it’s great to hear. The beats though, THE BEATS. The production lends “Lessons” a hit-and-miss feel, as the album starts well, dips in to mediocrity and ends well. It’s genuinely infuriating, as these guys deserve better.