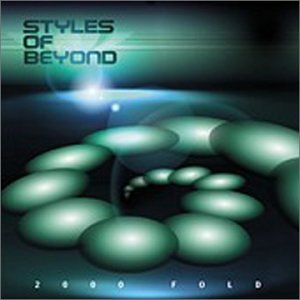 I know we’re all tired of everything being named 2000 by now and most of the rational minded among us recognize that the millenium doesn’t even +begin+ until 2001 and that the Y2K meltdown isn’t going to happen. Just in case though, stock up on some double AA batteries for your Discman – because if you couldn’t listen to 2000 Fold by Styles of Beyond, that really WOULD be a tragedy.

Trying to pin down what kind of album this is verges on impossible. The SOB’s own Ryu (a.k.a. Tiger Trenchcoat Chan) and Takbir seem to be able to morph into ANY of a variety of different styles, perhaps inspiring their name. On “Muuvon” they create the atmosphere of a jiggy-fied club scene without near the level of inanity. In fact the only bottles of Moet in the album anywhere are “tripped over” on Ryu’s way to the dancefloor in “Easy Back it Up” – stitched together with a Q-Tip sample you’ll know and love.

Then for the people who are hardcore into the independent hip-hop scene, songs like “Winnetka Exit” are the lick. A simple bass strum and deep reflections into a pool of BROKE shine off the surface as they bum change to fill up the tank with gas. Then “Skullyanamayshun” flips every Style OF Beyond as they travel the galaxies with GigaPet’s so well that even Company Flow’s El-Producto would be jealous.

And if you really want to trip off the storytelling vibe that keeps you trapped in every word, songs such as “Spies Like Us” and “Hollograms” (featuring Spaceboy Boogie X) will have you snapping your fingers, nodding your head, and memorizing the lines. Then you can trip out with Divine Styler on “Killer Instinct” and if THAT wasn’t enough you can check out Rahzel’s new beatbox rival Click the Supah Latin on “Click Beat Box”. STILL not impressed? Check out DJ Rhettmatic’s “Come Out Your Frame” interlude.

The glue that holds so many different Styles together is the great production by Vin Skully, Divine Styler, and Bilal Bashir. The downside? For some reason, this entire album is censored. It makes no sense – but then again neither does the fact they can freak so many diverse sounds and still retain sanity. If you’re not completely satisfied.. well I can’t get you your money back, but I’ll be damn surprised.