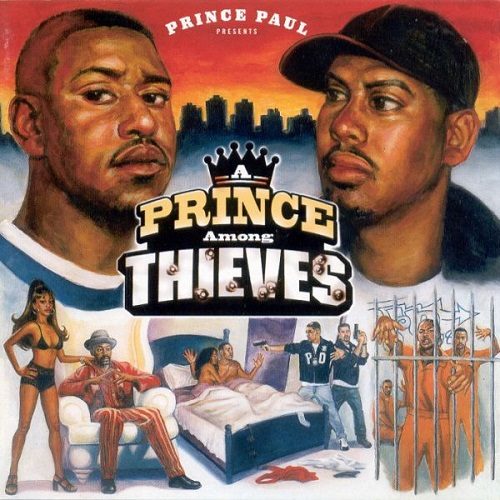 Prince Paul :: A Prince Among Thieves

Is this album a movie, or is this movie an album? Nobody’s quite sure. But true to the demented genius that he is, that’s exactly the dilemma Prince Paul wants to leave you with. And perhaps in homage to Quentin Tarantino’s “Pulp Fiction” the movie begins at the end and comes back around full circle.

Like most good action movies, this album has two stars – the up and coming rap star named Tariq (played by Breezly Brewin from the Juggaknots) and TRU (as played by Sha) — the man who is “like a brother” to Tariq and who his moms constantly says Tariq should be more like. What she doesn’t understand is that TRU is a drug dealer who makes all his money on the DL. Without giving away too much of the movie, suffice it to say that these “like brothers” are continually tense. Tariq is envious of TRU’s finances, and TRU is envious of the fact that the Wu (yes *the* Wu) are about to offer Tariq a rap deal.

This album has comedic highs and tragic lows. The truly ingenious parody of Ice Cube in “Steady Slobbin'” will have you rolling on the floor in laughter even if you *don’t* know the original – just picture a guy trying to get some ass at any cost but generally getting played; and when he finally does the girl says “You call that Sexual Healing? Get the fuck out!” At the opposite end of the spectrum is “Handle Your Time” featuring Sadat X, Xzibit, and Kid Creole – Tariq’s stint in jail after catching a charge from Officer Bitchkowski (Everlast). In between Tariq meets everybody from Weapon World’s owner Crazy Lou (Kool Keith) to the Mr. Large (Chubb Rock), the largest dealer on the East Coast. So large, he proclaims himself “w-w-w-I’m-the-Shit dot com”.

Tariq struggles to get a G so he can finish his demo in time to meet the Wu, but you won’t find listening to this album near as hard. In fact, this is conceptually and musically one of the best things to happen to hip-hop – PERIOD. Not just in 1999, not just in the 90’s, but in the 25 years that hip-hop’s been on the map. In fact, I’ll be so bold as to say this is the one album you SHOULD buy this year, regardless of whether you know Prince Paul from his work with De La Soul (who appear on the album), Gravediggaz, and Stetsasonic or not. The grooves are smooth, the plotline will keep you on the edge of your seat, the raps are dope, and the caliber of the guests is top notch. Best of all, this album may *finally* announce the return of Big Daddy Kane, as he drops an all-time classic pimp rap on “Macula’s Theory”. So don’t sleep on this movie. I mean soundtrack. I mean movie. I mean WHATEVER! It’s dope!