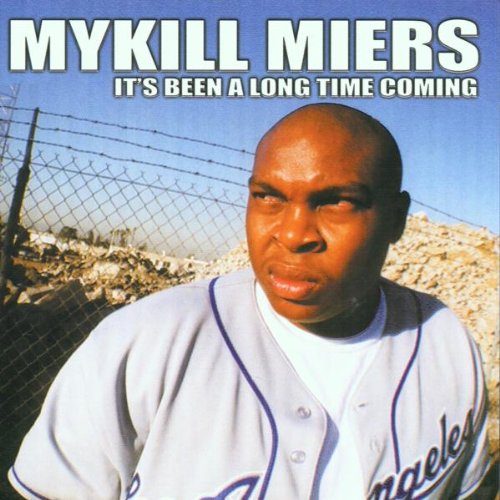 Halloween references aside, Mykill Miers has plenty of reason to scare other rappers shitless. After following the usual indie route of releasing twelve inches and gaining underground acclaim in rap cyphers, Miers comes out of nowhere with a full-length album that is well produced, complete with all-star cameos, and features blazing lyrical skills. This album was unexpected and quite frankly is a pleasant surprise.

On the balance beam, the number of tracks stacked up on “fresh” raise the bar twice as high as the platform of “mediocre”. Miers brims with confidence on “Do the Math” (also featuring Iriscience from Dilated Peoples) with lines like “when I bust raps, similar to Chow Yun Fat when he bust gats,” and he even “transform(s) into a gat, like Megatron.” Sure you’ve heard punchline MC’s with metaphors and similies before, but Miers has a gritty voice and a tendency to flip humerous lines like Chino XL and Ras Kass. One of my favorites is in this song too: “But yo, I got y’all scared like Stigmata; ready for combat and whoop ass like Gymkata.” If you haven’t seen the latter movie, rent it – it’s REALLY bad.

Almost all of the guest appearances work in harmony with Miers and don’t take away from his billing as the owner of this album. The much-too-long absent E-Rule appears with Born Allah on “Cut Throat”, the sinister and menacing Freddie Foxxx guests on “Wanna Be an MC?”, and the well known Cali Agent called Planet Asia shows up for “Immaculate”. The only real dissapointment is Andre the Giant’s appearance on the otherwise excellent track “Straight Dirt.” A.G. used to be one of the most formidable rappers in the industry but now sounds bored with even bothering to bless the mic. In every rap I’ve heard from him since 1999 he sounds like he smoked five bags and drank a pint before rapping, and this lethargic performance is unfortunately no better than the rest.

Miers has no problem holding it down solo throughout on slamming sets like “Doin’ My Thing” and “Triggernometry”; both produced by Cheapshot, and on “Rock the Mic” and “Killing Spree”; both produced by Diverse. There really aren’t any major flaws. You’ll keep on rocking right through to “Don’t Test” and “Best Friends Become Strangers” straight to the finale slash title track. As the self- proclaimed “Hitchcock of Hip-Hop” Miers tries to be a mystery but the sound he personifies should be VERY familiar to anybody with a passion for original, real hip-hop.