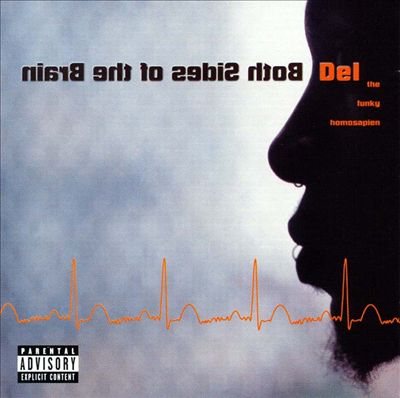 Del the Funky Homosapien :: Both Sides of the Brain

Mista Dobalina, are you there? This is the Hip-Hop nation calling. You’re needed on the scene right away. The wordplay of today’s lyricists has become too boring; we need you to breathe life into H.E.R. before the patient becomes terminal. Mista Dobalina?

Well, next time don’t call collect. Del the Funky Homosapien is still one of the industry’s most underrated mindbenders – so you could afford the thirty-five cents to take up his time. By the same token (not a subway pass though, they’re more expensive) Del should not sell himself cheap either. This latest (and long overdue) return of the Hieroglyphic Godfather plays out like walking into a dollar theater and seeing Al Pacino in a Gamera movie. By the time you get over the shock, you’re asking yourself – why did he settle for THIS? He’s one of the GREATS. Why this cheap trash?!

Indeed Del doesn’t; and the sad irony is that the only one to blame for the mostly mediocre beats is the artist himself. Steven Spielberg doesn’t act in his own movies, so why does Del rhyme on his own tracks? It’s a mistake. “Time is Too Expensive” is ironically accurate; you feel as if you’ve been sifting mud for hours for a couple flecks of gold. They are there of course, since “Del has been ordained to terrorize your brain” but the weak beat and distortion box effects on his vocals ruin the whole presentation.

This scenario plays itself out over and over again throughout with dissapointing results. The only Del produced tracks that hold water throughout are the Oakland bass laden chumpies “Shit Talkers”, “Phoney Phranchise”, the electronica adventure “Style Police” and the creepy anti drunk-driving diatribe “Skull and Crossbones.” Four out of thirteen Del? That’s a fine batting average, but you’re not playing for the A’s.

Fortunately for the Del fans somebody decided to breathe life into this album with six outside producer contributions. The fact they work so well is a relief but only raises the question of why Del didn’t farm out more of this album’s tracks to other people. Casual’s moody “Jaw Gymnastics”, Domino’s (very Premier-esque) “Press Rewind”, and El-P’s “Offspring” are all winners – and the first and latter of these feature guest raps by their very composers. The rest are even better; starting with Prince Paul’s ill “Signature Slogan”, moving to Khaos Unique’s “Proto Culture” (an excellent ode to video-gaming) and finishing the album with the A-Plus laced and guest-rapped “Stay On Your Toes.”

Ultimately, this makes half of the album a winner and half of the album filler. For a Hiero Imperium release this is a bit surprising; since no album has been this much of a hit or miss split since Souls of Mischief’s “No Man’s Land.” That doesn’t mean it isn’t worth the time and effort if you’re a fan of Del’s rap or you’re into lyricists who take wordbending and mindtwisting to the next level – but that’s going to limit this new album to the core audience instead of getting Del to that next level of exposure that he should have attained after over a decade of paying dues in the rap game.

Del the Funky Homosapien :: Both Sides of the Brain
6.5Overall Score
Music5
Lyrics8