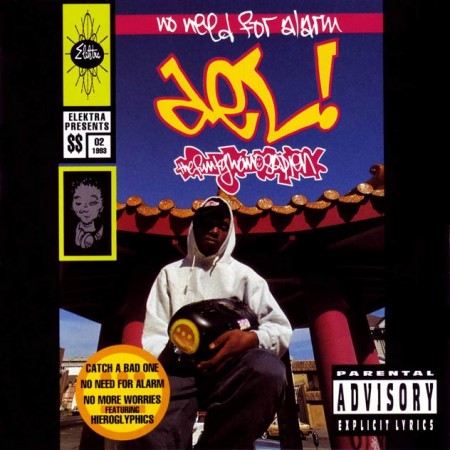 Del the Funky Homosapien :: No Need for Alarm

In the early 90s, hip-hop thrived on super-talented crews that eventually spawned individual solo artist megastars. Whether it was Redman stealing the show from his soon-to-be-split-up Hit Squad brethren on EPMD’s “Headbanger;” or Bustah Rhymes setting off the LONS (Leaders of the New School) craze after his dungeon dragon-laden verse on A Tribe Called Quest’s “Scenario;” or even Method Man having his own self-titled song be the second single from Wu-Tang Clan’s “Enter the Wu-tang: 36 Chambers” album; it seemed like hip-hop groups were a movement unto themselves, and the brightest stars of these respective camps went on to move, according to the music industry, the most important thing of all- units.

One such army of artists which never really reached its expected commercial peak was the California collective known as Hieroglyphics. Their movement, spearheaded by the Souls of Mischief hit record “93′ Till Infinity,” allowed another member of their camp to reintroduce himself- Del the Funky Homosapien. By now, most people know Del either from his Deltron 3030 collaborations with Dan the Automator or from his role in the short-lived hybrid band The Gorillaz. What many fail to realize is that by the time each of these roles earned him critical acclaim, Del had already been star, most notably as a result the classic lyrical jibes he made about wack emcees on his second LP, No Need for Alarm.

There was a time, and it was not all that long ago (about 7-8 years ago), when hardcore hip-hop was in heavy rotation on BET. That was before the machine (Viacom) snatched up the station and transformed it into the cookie-cutter format we now see today. In 93′, on Rap City’s Top 10, one song held the number 1 position for many consecutive weeks: Del’s “Catch a Bad One.” The video managed to depict a much darker side and more hardcore side of Del, one which wasn’t present on his first album “I Wish My Brother George Was here.” Over lo-fi chopped drums and a deep bass-driven organ groove, Del quips, “You gotta be eliminated, the way I demonstrate it/ you hate it, but still I am the greatest/ Like a boxer, I’ma knock your socks off/ nowhere to run to, exits are blocked off/ steadily I’m dissing men, I hope you’re listening/ brothers like my flow, others ride my jock like a bicycle but I’m psycho/ fools tried to play me like Tyco/ gots to pull the rifleâ€¦.” Thus it was made clear from the album’s first single and video, wack emcees weren’t safe. Del was taking heads.

And he makes that point to an even greater degree on the self-produced and appropriately titled cut “Wack M.C.’s,” where he rhymes over a jazzy bass guitar loop and short trumpet samples that chime during the hook that flatly states, “Wack emcees, your time is up!” Over looped drums and another mellow bass groove, “Boo Boo Heads” finds Del waxing poetics about shady females, while “Worldwide” is classic material with a hardcore drum break, rapid piano loop, and Del trading battle-ready verses with his Hieroglyphics brethren. Over the harpish guitar strums of “Wrong Place,” Del, in his characteristic off-beat flow, rhymes: “Damn I hate cops, I need to bust they chops/ always getting props for the niggas they pop/ I smoke weed, get weeded cuz I need it/ too calm my nerves before a pig get bleeded.” Indeed, an aggressive stance taken in a then post- Ice-T “Cop Killer” world. But then again, Del’s never been one to hold his tongue.

Nearly twelve years since its release, “No Need for Alarm” needs to be looked at for what it was. Specifically, it was a breakout album by an artist in a camp that probably saw the writing on the wall. Unlike ATCQ and Wu-Tang, the major labels would never give Hieroglyphics the push it needed to truly leave its mark on the world. But in 93′, the hip-hop community was still somewhat a community to itself, and in true school circles, “No Need for Alarm” was a seminal recording which pre-dated and eventually spawned an entire generation of underground rappers with off-beat flows talking about how they’d “lyrically assassinateâ€¦.” every wack emcee that stepped in their path. The production is dark, yet refreshingly jazzy, truly a relic of an era much missed, but not forgotten. And while Del may have moved on to do some more culturally enriched music, fans of the looped breakbeat era will always remember when Del the Funky Homosapien’s “Catch a Bad One” was in heavy rotation, and we all thought we’d chill from 93 till.