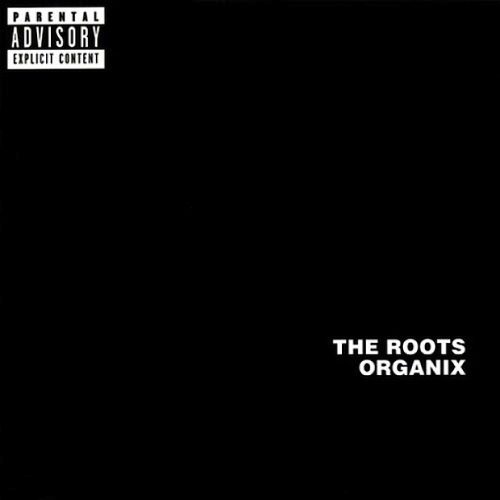 Was it better when the Roots were still Square? Before they became righteous “saviors” of “real” hip hop?

“Organix” was released in 1993, and not much was heard from it. It made some waves, yes, but I doubt the average head in 1993 or even the average underground enthusiast would have known exactly who the “Square Roots” from Philadelphia were. And for the lucky head in 93 who DID know, it was a very sweet secret indeed.

This is probably the Roots at their most playful and, dare I say, fun. None of the seriousness and “we’re hard at work, here” pretentiousness that have popped up from time to time on their last albums is evident here. Hell, ?uestlove himself steps up to bust a verse or two on “Pass the Popcorn,” a straight funk song.

The band sounds a little looser, too, and that’s good. Warm sounding tones, thick drums, none of their later “Make live shit sound like a sample” disease here. It’s pretty raw, and it’s better that way. If it’s gonna be live shit, let it sound like live shit, and the Roots are unquestionably the best live band in hip hop (hell, the best live band in R&B, while we’re at it.) Songs like “The Session,” “Popcorn Revisited” (which manages to make “Pass the Popcorn” even funkier) “The Roots Is Comin,” and “The Anti-Circle” prove this nicely, as the band stays tightly in the pocket while still paying respect to the jazz roots with excursions into melody on keys and bass.

The Roots haven’t been this fun since, either. You got a goofy ass outro, off the wall one liners peppered here and there, and the live cut, “Essawhumah?” a call and response song showing off each band members versatility with crowd response, that will have you going through your daily duties chanting, “Essaywhuman? Essaywhuman!”

But the album tends to suffer after repeated listenings, as the lyrical content doesn’t seem to drift too much from Black Thought’s self proclamations of dopeness, and he’s not good enough at that style to keep most listeners interested for a long stretch of time. There’s also a couple songs on here (“Peace, “Good Music,” “I’m Out Deah”) that are pretty blase because the tempo doesn’t switch up much.

As a portrait of a young band, though, it’s a hell of a picture, even if the photo is grainy and smudged a little. I happen to think it makes the picture a little more interesting to look like. The albums high moments far outweigh it’s low moments. They stepped up with their next album, “Do You Want More?!?” but it wasn’t hard when they were standing near the top of the stairs already with “Organix.”