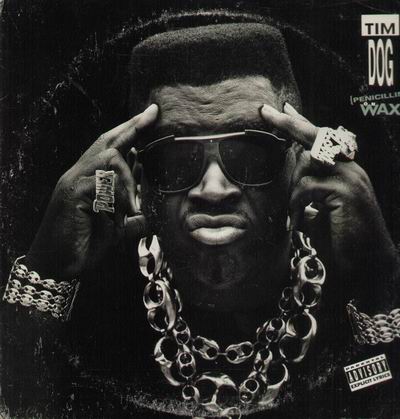 I can honestly say there has never quite been an album like this one. It’s almost the definition of a hip hop paradox: It’s loud and obvious, yet cryptic; political leaning but contradictory on a level KRS-One could have never imagined, ignorant but well meaning; deathly serious and at the same time utterly hilarious. And I’m almost certain none of it except for the deathly serious and loud was ever really intended.

Loud? Tim Dog made his name nationally with the single and video “Fuck Compton.” At the height of NWA’s popularity in 1990-1, Tim was the first rapper (besides Ice Cube) to come out and publicly rip the shit out of Eazy and company, and for good measure, he threw in a couple shots at DJ Quik, notably on the tracks “Step To Me” and the interlude “DJ Quick beatdown,” a pretty realistic sounding skit that starts “Aint that that punk motherfucker Quik over there?” and ends with slapping, squealing, and smacking.

But those are library quiet compared the napalming he gives “Dog’s Gonna Getcha!” featuring lyrical gems like “AAAAAAAAHH! I can’t believe how DOPE I am!/ I’m the motherfuckin maaan!/ Smackin MC’s with one hand!/ Don’t cry, you little bitch!” all at one volume: Larynx tearing loud. He unbelievably amps it up a notch for a final run through of the chorus, which consists of ” Yaaaaah! YAAAAAAAH!” repeated about 6 or 8 times.

Cryptic? Well shit, what the fuck does “tha iff the liff the giff the spliff the hole the fold the make..” really fuckin mean? And yes, he does this line, not once but TWICE (“Fuck Compton” and a variation of it in “Goin Wild in the Penile”) is it just rhyming nonsense gibberish or is the man actually trying to say something?

Political? “I Ain’t Takin No Shorts” is Tim’s Chuck D impersonation, down to the air raid siren beat and deepened delivery. Beatwise, it sounds like something PE would have left off of “Apocalypse 91” which isn’t all that bad, and lyrically this is Tim’s most concise shit. He also tackles the problem of pop rappers not staying “real true to the streets” in “I Ain’t Havin It.”And he thought that pop rappers were bad then…but I digress. He calls out Kwame (“rap is not fuckin polka dots!) Kid and Play and Hammer (“Rap is not you can take it to an arena and market it as a dancer!” ) and of course, hip hop’s bitch whipping boy Vanilla Ice (“Rap is not you can put it in a movie with a bunch of TURTLES!!!”) at the end of the song.

Contradictory? How can you call for revolution and political power on one track when you shoot the guy who stole your little brother’s bike; (“Bronx Nigga”) and then have another prison inmate sucking your dick at the end of “Goin Wild in the Penile” (“Bebe…come here and suck my dick. )

Tim sums his own album up pretty well in “I Ain’t Havin It:” “Usin big words/ usin small words/ usin NO words/ but that’s absurd.” This album is an exercise in absurdity, lyrically. Tim’s delivery is forceful and, honestly, dope as fuck. I can’t lie. If this man was able to write truly dope lyrics, he would have been a pretty big figure in hip hop history, as opposed to the amusing footnote he is now. But as it is, shit, I’d be frontin if I didn’t say this album was entertaining. It’s entertaining for basically 3 reasons:

Tim is funny as fuck, intentionally and otherwise.

Kool Keith (as Rhythm X, one of his first alter-egos) is on board for a few songs

The production is bangin as fuck.

This is basically an Ultramagnetic album, except there’s no Ultra. The creative team behind “Funk Your Head Up” was runnin full speed at the time they were making this album, and it shows. They were ahead of the curve as far as samples and production goes in 1991, and these beats will most definitely have you nodding and bouncing your head regardless of whatever crazy shit Tim is screaming over the tracks. “Step To Me” is aggressive and relentless, but not simple beat you over the head type shit. It’s layered carefully, much in the same way “Fuck Compton,” “I ain’t Havin it,” “Goin Wild in the Penile” “Bronx Nigga” and “Low Down Nigga” are. Listening to this, I just kinda got the feeling that producers aren’t putting as much work into their beats like they used to. What’s even funnier is that I started musing on such thoughts while listening to fuckin TIM DOG.

But for all that, there’s only one reason you should pick up “Penicillin on Wax” if you haven’t already: “Sexual Fantasies.” Hands down one of the funniest (I rank it just behind “Talk Like Sex” by Kool G Rap and DJ Polo) and nastiest sex rhymes ever made. The beat is silk dopeness, Kool Keith comes proper (ha. so punny.) with his fantasy involving jacking Pebbles up in doggy style and ejaculating in her friends hair, and Ced Gee even shows up to nut in a girls eye for the last verse. But the highlight is Tim’s gut busting verse concerning him in En Vogue’s dressing room. I dare anyone to not laugh at the utter absurdity of smoothly crooned lines like “And then the short one, you know, the one with the fat ass/ OOPS..they all have a fat ass” and “She wanted me to pee in her face/ “So what did you do?”/ I pissed in her face!”

Bottom line: if you find this in a cut-out bin anywhere, DO NOT HESITATE to pick it up. It’s the hip hop equivalent of movies like “Dumb and Dumber:” Great production values, utter craziness. Although it’s debatable whether or not it was Tim’s intent to be that fucking out there, it’s no question this was one of the most entertaining albums to come out of the early 90’s, point blank.