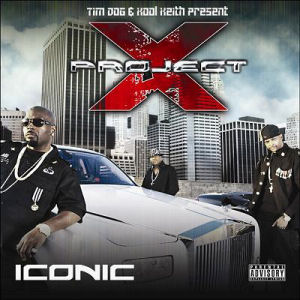 when Heavy D passed away in 2011 and something I feel I’ve had to do far too many times in general. You become increasingly aware of your own mortality when so many of the artists you grew up with pass away, but that’s a subject for another day and article. As I compared Tim Dog’s discography to my own I noticed a glaring omission – a 2009 collaboration album with Kool Keith called “Project X: Iconic.”

2009’s “Project X” is the latest (and now sadly last) salvo in an Ultramagnetic friendship that dates back to the 1980’s. One of my favorite collaborations that these New Yorkers recorded is an album called “Big Time” in 1996. As a self-confessed Kool Keith junkie, I felt double dumbstruck I somehow overlooked the “Project X” album. Thankfully Amazon.com

The first thing that’s obvious is this album should have been called “Kool Keith, Tim Dog and Marc Live Present – Project X.” From Clayborne Family to Live has always shown himself to be down to earth and solid on the microphone. I’ll even go one further here – solo Marc songs like “Do It 2 Death” are the glue that holds this album together:

“Yo who’s next to fall? Yo – yo it’s the X
Marc Live in the flesh rhyme best
Rhyme next, get your neck snapped, get your head cracked
Roll dice, yo gamble get your name snatched
I love it when a plan come through
Yo we the A-list, +A-Team+ serving you
I don’t need no hype from a magazine
or a blog on your MySpace dissing me
Fuck a forum, I go right for ’em
It’s me at the Fat Beats, it’s me with a black piece
You know I’m all about the drama
All about the late night calls from your momma”

The Jadakiss samples on the hook are doubly appropriate, since there’s a definite stylistic similarity between Live and Jada. Live can’t save some of these songs even with a tight verse though, and that’s because like so many of Keith’s albums over the last ten years, it appears that Keith is not willing to pay any outside producer other than the occasional collaboration withKutMasta Kurt. Once in a while Keith actually produces some dope beats, but that’s like saying a broken clock is still right twice a day. Unfortunately with no liner notes I can’t prove Keith did or didn’t do it, but the electronic beats sure SOUND like his. In general music is not his forte and the thin and tinny sounding drum track of “Project X Disiac” is no exception. I almost stopped playing this song because of it – which would have been a shame since I would have missed Tim Dog’s verse.

“Shorty real naughty; took her in the back of the steps
Then I fucked her in the ass, she was drunk from four 40’s
Ran track on her like my man Jeff Gord’y
Bitch started throwin up, +Sick Wid It+ like E-40
Eww bitch you nasty – somehow the shit turned me on
so I took the bitch shopping for somethin classy
A mink dog fur from Lassie
Dropped the bitch off, picked up her retarded cousin named Ashley”

The verse actually gets more vulgar after that – I won’t even tell you what he said about White Castle and his bodily functions (though you might be able to guess). It’s classic Tim Dog, a throwback to his “Penicillin on Wax” days, where even his whackest rhymes were delivered with such passion and intensity they became classics. I would have included an audio clip to let you check it out for yourself, but “Project X: Iconic” barely seems to exist outside of the Amazon download link. Alleged interviews with the trio about the album have expired (or possibly never even existed), reviews other than this one can only be found at Amazon, and the fact they all give it high marks makes me suspicious they were written by employees of Rap Legend Recordings – which itself has a minimal online presence that is barely updated (including a defunct MySpace).

There are a few songs which break through the atmosphere of questionable beats, #4080 record labels and shoddy album promotion. “Spolight” (listed that way on the album and download even though it’s clearly supposed to be “Spotlight” – more shoddy shit) has a melody that’s not annoying, a unnamed fly singer on the chorus, and it’s one of those instances where Keith actually sticks to a point and doesn’t just ramble non-sequiturs all over the beat. “Lamborghini” mixes together the right amount of vintage Jay-Z and modern day sound to be appealing, while “Quietriot” is unapologetically a throwback to the 1980’s. “Rappers Today” is an oversimplistic beat, but the title alone gives you an idea of the topic matter, and Tim Dog’s verse doesn’t disappoint. “I fought in the war, you niggaz is scared as fuck/I paid my dues, you niggaz don’t have a buck!” Apparently he didn’t either though – again judging by the lack of reviews I don’t know if anybody promoted this album or if anyone bought it – and shortly thereafter in 2011 Tim pleaded guilty to larceny and extortion. That makes it obvious he pulled no fat royalty checks off “Project X” and sadly won’t collect any if this album sells now. As a fan of all three men I consider it worthwhile, but have to say that the majority of consumers will want to take a pass on this one.