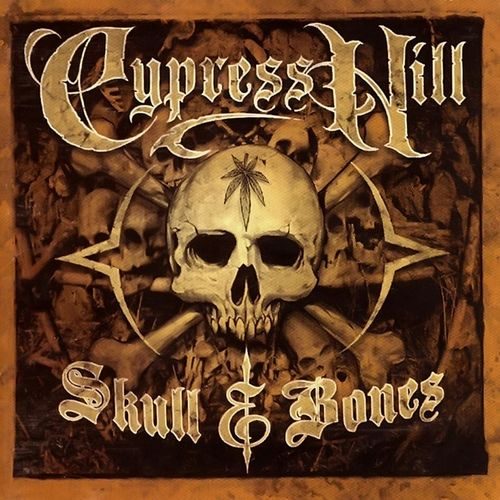 Out the gate, Cypress Hill has three immediate advantages over many of their peers in the rap game: longevity (their fifth full-length album over the last decade), production (DJ Muggs is an undisputed beatmaster) and a loyal audience of everything from MTV viewers to “High Times” readers who support their concert tours and buy products emblazoned with their trademark skulls and fonta leafs.

This reviewer would have to include himself in that category; as the proud owner of an autographed “Cypress Hill IV” poster (and no, it’s not for sale). Although no album has ever surpassed the brilliance of their self-titled debut, the nasal flows of B-Real and vocals of Sen Dog and production of Muggs continues to be as intoxicating as the marijuana they constantly smoke. Cypress comes back again and this time offers two discs for the price of one – a “Skull” disc featuring their trademark hip-hop sound and a “Bones” disc with a grittier hard rock edge undoubtely inspired by the surging popularity of this fusion sound.

Unfortunately though I’d have to say that like most double albums, the best of the two discs could have easily been pared down to just one album. On disc one for example, “Rap Superstar” could make the cut along with “Highlife”, featuring the underrated B-Real at his best storytelling. “Certified Bomb” is the perfect example of DJ Muggs’ punchy and high-strung production while B-Real brags “fuck what you heard, I brought down the Titanic.” However “We Live This Shit” was a straight out mistake – an unnecessary year 2000 revision of “Hand on the Pump”. “Worldwide” is musically alright but uninspiring lyrically and quickly (and pleasantly) over in two and a half minutes.

Disc two fares a little better. Cypress seems to be onto something with their rap/rock fusion, as the alternate version “Rock Superstar” crunches just as loudly if not moreso than the earlier version. “Valley of Chrome” has a surreal ominous quality and a hard-rock chorus any metalhead could appreciate. Equally choppy is “A Man” which features Sen Dog going for delf in a fairly impressive manner. “Dust” is perhaps the cream of this crop – as gritty and hard to get a hold of as the song’s title.

Overall Cypress Hill continues to tread the same path which lead them to their current level of success, with some flashes of new flavor throughout. Avoid the songs like “Stank Ass Hoe” which have no value musically or lyrically. Like every Cypress album, there are a few. And stick with the second disc a lot this time out – it’s shorter but it packs a harder punch and is more satisfying.