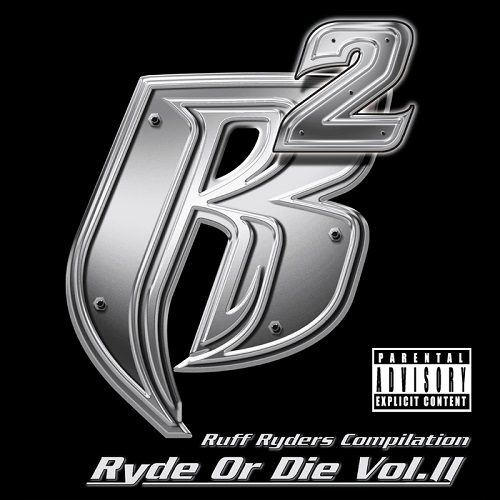 The House That DMX Built. It’s not an ‘official’ nickname for the rappers and producers known as the Ruff Ryders, but it might as well be. His Def Jam debut put them on the map; and the unlikely popularity of Swizz Beatz as a producer propelled their various releases to gold and platinum status.

Consistancy has always been an issue for this eclectic crew though. One minute DMX is dropping blazing joints, the next Drag-On kicks some weak shit. Eve can challenge the best women AND men in rap for respect on the mic; but the often highly praised Jadakiss tends to dissapoint right when he steps away from The Lox into the spotlight.

To some degree, “Volume II” attempts to combat these problems by spreading out the production duties and bringing in guest rappers. The latter technique is especially effective on “WW III” – a Swizz Beatz uber-coastal wet dream with Snoop Dogg, Yung Wun, Scarface and the aforementioned ‘Kiss on a track specially guaranteed to rattle your boxes. For the testosterone impaired; play with caution – it WILL put hair on your chest. As for the lead single “Got it All” Swizz passes the mixing board to Teflon, who gives the song a Carribean twist that is as irresistably catchy as Eve’s “bad bitch” charm.

“Aiyyo one touch’ll make a nigga blush on sight
Grown men create a crush; nails they bite
It’s a game – try to catch me – but only if you can
Takes a lot impress the bombshell to want a man”

Despites such highs, Ruff cut perfection constantly slips away from the Rydesters throughout. “2 Tears in a Bucket” is a tolerable track but not really blazing enough to justify Redman and Method Man cameos. The ironically apt “Fright Night” has Swizz Beatz RHYMING to one of his own tracks; an idea which would derail completely without Busta Rhymes coming in for the assist. The noisy “Stomp” would probably make Atari Teenage Riot happy but is absolutely ass-backwards for a rapper like Trick Daddy who flows so fluidly over Miami bass’n’funk.

As a whole the album tends to split down the middle. A banger like the TJ Beatz produced “Go Head” makes The Lox rappers sound like all-stars; while the P. Killer Track produced “My Name is ‘Kiss” actually UNDERwhelms Jada to the point he turns an insipid performance that is an all-time low. If you’ve been asking where DMX was on an album by his own posse; he does turn up at the tail-end on “The Great” although it’s a little too late. His sometimes obnoxious barks and growls would have actually been welcome for the simple fact he tends to lively up a track when he drops a cameo verse. R&B fans may appreciate Parle’s bonus track “It’s Going Down” but hearing him sing over the Gap Band only makes me yearn FOR the Gap Band. To my ear, he doesn’t do their track justice.

As sequels go, the Ruff Ryders have actually improved on the original compilation concept in many respects; but like most any compilation it tends to fluctuate wildly between brilliance and stupidity. 14 tracks and 2 skits is the right length, but one wishes more of the songs packed the catchy punch of other Ruff Ryder hits like “Slippin'”, “Love is Blind” and “Spit These Bars” – they just aren’t Ryding hard enough.