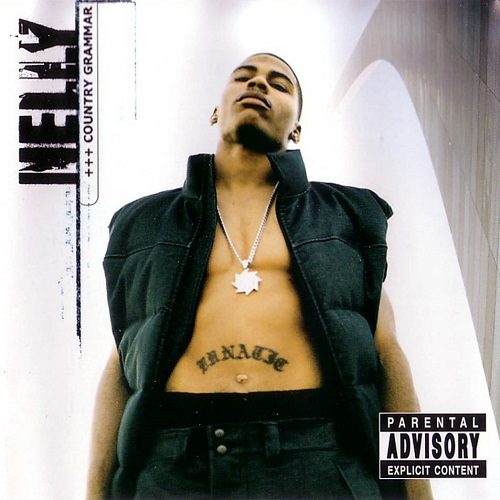 He’s from St. Louis and he’s proud – so proud he put down hometown comedy hero Cedric the Entertainer to do the album’s intro. If you had been sleeping on the city of the big Arch (no motherfucker, not McDonald’s), here’s your wake-up call!

Besides his Midwestern pride, Nelly also features a flow which helps to distinguish him from his other rap brethern – a musical flow which falls somewhere between TQ and Domino without ever straying so far away from it’s rap roots it gets mistaken for R&B. Combined with the smooth musical tracks of Jason “Jay E” Epperson, this tends to create trunk bumping smoothness such as the opening “St. Louie” or the current chart-topping “Country Grammar (Hot Shit).”

Don’t confuse Nelly for a hip-hop activist with a lot of deep thoughts on his mind. The free-flowing top-down anthem “Ride Wit Me” is all about the killer B’s of rap: blunts, brew, bitches, and billions. “Why do I live this way?” raps Nelly, to which his crew shouts back “HEY, must be the money!” Fo’ sho’ playa, that’s where it’s at. Keep it on that level of Notorious B.I.G. style “Party and Bullshit” and you’re going to appreciate the album the way it was intended – anthems for club heads and party-goers. Songs like “E.I.” and the Lil’ Wayne guest-spotted “For My (Niggaz)” will definitely get the party people KRUNK and that’s what it’s all about.

What works so well about this album is the fact that Nelly and Jay E present their musical vision almost entirely uninterrupted. Even though Nelly’s boys the St. Lunatics show up on a couple tracks such as “Batter Up” and collaborator City Spud turns in a VERY-smooth riders anthem on “Luven Me”, the album represents one rapper and one producer in a way that’s not seen much outside DJ Premier and the Guru. This won’t be mistaken for a compilation album as some of Heavy D’s albums are (no offense Heavster, we still got +Nuttin’ But Love+ for ya) – it’s pure uncut St. Louis funk.

Nelly’s debut on the hip-hop scene works so well because he presents the more laid back feel of Midwestern fun and good times. That’s not to mistake him for a herb; cause Nelly is still cocking “street sweepers” and smoking his “shimmy shimmy cocoa puff” – that’s just to say Nelly approaches his rap like a true P-I-M-P. He talks game, he keeps it smooth, and you find yourself being entranced without even realizing it. Step into his world.