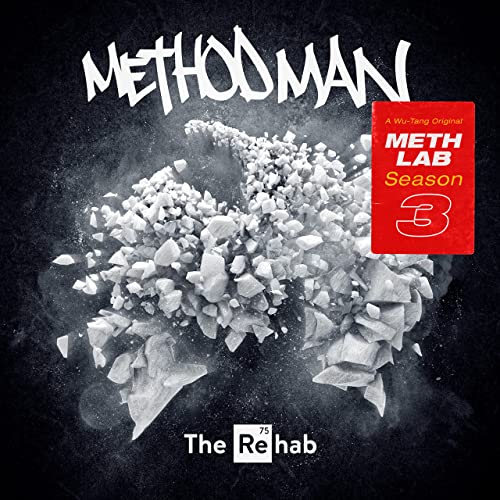 When the first “Meth Lab” dropped in 2015 I was unsure of its purpose. The long-delayed (and probably fictional) “Crystal Meth” album Meth has touted for years has shown no sign of materializing. Instead, fans are left with projects that are halfway house records – neither album nor mixtape. He cooked up some verses and padded out songs with guest features. The first Meth Lab I found to be a disappointment, the sequel forgettable, and yet here I am largely excited about a third installment. The reason stems from his memorable guest appearance on Conway the Machine’s “Lemon” which garnered acclaim from many. It was a reminder to an audience that this was the only guy who featured on Biggie’s debut. Method Man is an animal on the mic, which he has shown glimpses of recently on Snoop Dogg and Dave East projects, but this eternal reluctance to drop an album continues to keep his name out of certain discussions.

“Meth Lab Season 3: The Rehab” doesn’t really follow a theme or plot that’s perhaps advertised. This is a collection of tracks not dissimilar to the previous two efforts, the difference here is that Season 3, much like The Wire, is a marked improvement in nearly every way. The only track that sees Meth on his own is “Guillotine”; no relation to Raekwon’s original but the performance here is just as razor-sharp, aided by a playful Rockwilder beat that shows both artists continue to have a great understanding of what makes for a good Method Man song.

“Butterfly Effect” with RJ Payne feels like a missed opportunity – it’s a great Method Man performance with a captivating instrumental and a trademark hook but is overshadowed by an RJ Payne verse that’s too try-hard. It doesn’t really fit the vibe Meth’s gone for. We all know Payne is a beast on the mic, but either I’m growing tired of his style or the forceful aggression didn’t complement the Wu-Tang member’s silky smooth delivery. A better match-up of lyricists occurs on “Live from the Meth Lab” whereby Redman and KRS-One combine for a fun three minutes of celebratory cyphering. The KRS-One performance is particularly noteworthy, littered with all sorts of treasures for educated fans of hip-hop. There are similar methods used on “Training Day” but it’s overbearing when the beat is essentially a repeated slap over the head with a large bell.

Jadakiss lends further credence on “Switch Sides”, and Cappadonna is similarly reliable on “Stop Crying” making use of some solid beats by P Version. Hanz On was all over the first Meth Lab record, and he’s limited to a couple of appearances here, sharing time with Meth’s son from 2nd Generation Wu: 5th Pxwer. Streetlife is wildly underrated as an emcee, and like all good Wu-Tang mentees, he was clearly influenced by his mentor. Hanz On has little in common with Meth when it comes to razor-sharp flow or irresistible charisma but I’ll tell you who does possess those characteristics and hasn’t received his dues: Carlton Fisk. He’s imposing on the thumping “K.A.S.E.” and borderline ferocious on “King of New York”. A new Carlton Fisk record is long overdue.

I maintain that Method Man simply isn’t selfish enough with his solo material. He clearly revels and excels in a group environment, perfectly demonstrated by excellent guest features, decades of song-stealing Wu-Tang Clan performances, and a fruitful partnership with Redman. His albums are full of features and skits and often lack a clear vision or editor’s touch that helped his debut flourish. These “Meth Lab” records are thankfully skit-free, but highlight his philanthropic nature; none more so than “Find God” where he’s rapping alongside U-God’s son Intell and confessing that U-God has always been his favorite member of the Wu. He’s simply nice by nature, and “Meth Lab Season 3” confirms he’s one of the nicest to ever pick up a microphone. Sign me up for Season 4.