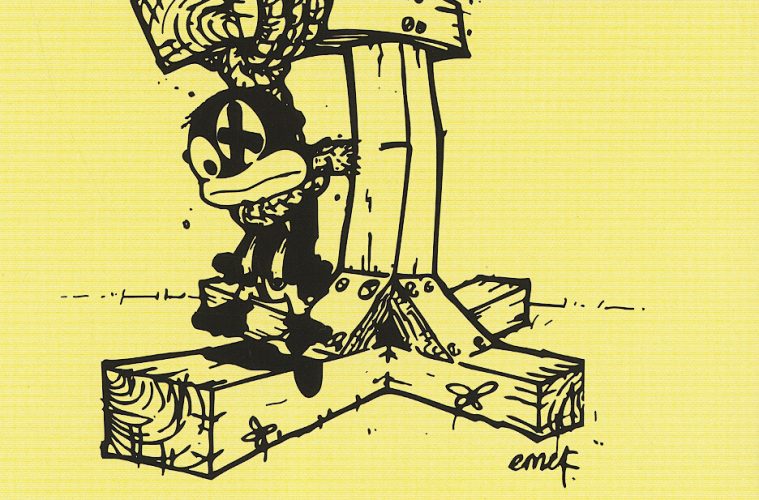 Did you think this album was lost for all time? Did you think that it was relegated to sporadic twelve inch reissues of missing songs by MF Doom, a.k.a. Zev Love X, on Fondle ‘Em Records? Have you been trading with collectors to pick up songs, or did you buy a poor quality bootleg of these tracks?

Anybody who knows the story of “Black Bastards” can relate; but for those who don’t here’s a brief synopsis – the best album Elektra never released. A nervous music industry in the early 90’s sat on or quashed a variety of hardcore angry rap artists; from Ice-T’s “Cop Killer” with Bodycount, to rapper Paris being boycotted for threatening to assassinate President Bush in the cover art of “Sleeping With the Enemy.” Into this mess walked the afrocentric and militant K.M.D., who had first struck the nation with somewhat FRIENDLIER raps like “Peachfuzz” and “Humrush” on their debut LP “Mr. Hood.” Opting for a harder sound and more aggressive stance backfired as their album’s artwork (a Sambo figure being hung/lynched) was vetoed and the controversy swirling around it caused the whole album to be hastily scrapped by the label in one of hip-hop’s all-time biggest acts of cowardice by a record label. K.M.D. had released a first single “What a Niggy Know?” but this too was pulled.

Now, for the first time, Readyrock Records has assembled the various tracks collectors had recovered into one complete collection – and unlike the bootlegs until now all the proceeds are going directly to Zev Love X and K.M.D. Member Subroc would undoubtedly have collected a share too but he was tragically killed in a head-on car collision not long after the album was shelved. This makes the lyrics to track 10’s “It Sounded Like a Roc” eerie in a way that can only compare to Biggie’s “You’re Nobody (Til Somebody Kills You)” when Subroc raps the words “If I be ghost, expect me back to haunt.” Ouch.

The quality of the material throughout is top-notch, but the quality the tracks were re-mastered with varies. “Get-U-Now” sounds like it was recorded in 10K RealAudio, while the previously mentioned “What a Niggy Know?” sounds almost crystal clear. “Sweet Premium Wine” is one of the funkiest odes to drinking ever recorded, but the immediately following “Plumskinzz” has an actual recorded SKIP in the intro and is subsequently cut off halfway through with the words “You’re so GOD DAMNED stupid.” How do I know this? Even if you had never heard this song when it was the B-side of a “Mr. Hood” single, it was ALSO on many of the earlier tape and vinyl bootlegs of the 90’s in PRISTINE UNCUT FORM. They do continue the song later on track 11, but the fact it’s split apart like this and a huge chunk of the middle is missing really ruins the song.

It’s hard to argue with having funky tracks like “Constipated Monkey”, “Fuck Wit Ya Head”, and the hilarious “Contact Blitt” (ode to going on tour with a bitch-ass bus driver) compiled into one OFFICIAL CD, but after such a long wait for this album one wishes they would have taken a little more care in mastering and recording this disc. The bootlegs may not have as many songs as this release, but the audio quality actually tends to be better. Flip a coin if you want but if you do decide to pay for the sanctioned release you’re getting some funky fat raps from a group that got unfairly kicked to the curb by record label politics. If the RIAA is suing Napster to fight for the rights of the artists, what does it have to say about VIOLATING their rights and not putting out dope albums the public would have loved? Labels often act contradictory to the artist AND the public’s need for high-quality fresh hip-hop. K.M.D. suffered and ultimately so did we – THAT system isn’t worth fighting for.