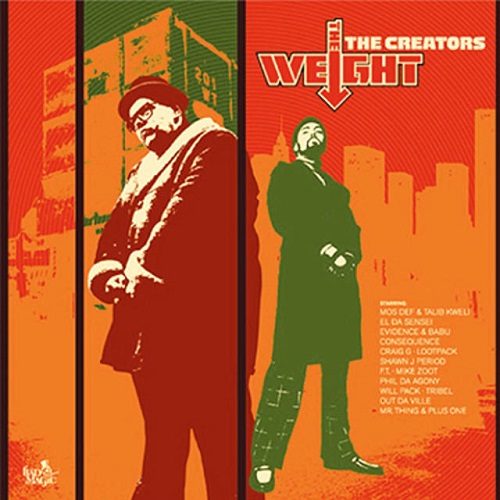 The Creators :: The Weight

Household names they aren’t yet. Big Willie style they will never flaunt. New Jacks on the scene, you ask??? Nawl, that doesn’t fit them either. So, you ask who might The Creators be then? To tell you the truth, I can’t really say. I have a couple singles dancing on a mixtape or two. I do know that they don’t reside states side. They represent the UK. One thing I am 100% proof positive on – “The Weight” is real Hip Hop!

As the name denotes, The Creators is your supa-produca type, collabo, duos (Yeah, what he said!). An all-star was called upon for their first full length to give it that perfect spectrum representation. You get a taste of the past, a feel of the present and a taste of the future. There are plenty of headnoddin’ catalyst on these plates (I got the vinyl fool!); Craig G, El Da Sensei, Loot to the Pack, Outt Da Ville, F.T., Mike Zoot, Plus One, Consequence, Iriscience, DJ Babu, DJ Mighty Mi, Diamond D, Shawn J Period, and everyone’s favorite dynamic duo Mos Def and Talib Kweli. Hell, who didn’t make the guest list? Haha, I say to the sample clearing agents! Haha, I say.

The Weight drops some serious homemade ish in ya face, like BLOW, GET ME THE FUCK OFF THIS TRACK! Smooth drum programming and live instruments made their way all around this piece. The Creators are way deep in beats believe that! You can say that this lp was used to sell themselves to the highest bidder. They used these lil’ teaser pieces called ‘Call Waiting’ to connect the actual songs together. What takes place in these interludes is your usual Hip Hop head acting up on the phone asking for shit he knows he won’t get, but asked anyway. But, the beauty of it all is the music used behind the comedic plea. Pure loveliness. Within those interludes alone lies a whole other dope lp. A bit of arrogance doesn’t hurt.

DJ Mr. Thing starts the ruckus with the obligatory lyrical scratch assault joint. I sample slaya, if you will or what is to take place on later track featured on The Weight. Is it me or is El Da Sensei getting better with every single? The flavor he puts up on The Music is rather nice. Taste some of it:

Winning? No question. No doubt.
Traveling to far destinations to reach all stations
Build skills like a mason. All-star creation. (Da Sensei)
Valid with the license to prove my mood
swing brings grooves DJs can’t refuse

Church bells and a lil’ Negro spiritual hum take you there. It’s easy to say it’s the music, but El holds his own.

And who told Craig G he could still bob some heads? That old dog rides one of those George Benson guitar ticklin’ type joints. Joined by Will Pack on ‘That’s My Word’, styles get from coast to coast. They push the language rather nice with their three minutes. The true envelope pusher has to be Phil Da Agony. His joint ‘Kronkite.’ What the hell is he talking about? Does it even matter? He goes on and on about shit that he makes rhyme. He kept my attention and that was good enough for me. Observe:

I spend $100 on Nikes while they give another million to Mike
Something just ain’t right…
Hit you real harshly, sell you weed and give you parsley…
Bitches standing close to me
Butterflies in they stomach off the x-tacyâ€¦wet pussies…
Legacies, legends, all-time greats
Platinum plate living in my mind state…

My neck got one of those Billy Blanks workouts when Out Da Ville dropped ‘Street Conexions.’ Scorrsaise, Lee Ramsey and Tempa represent the collective. The lyrics made mention to them being thankful for being able to bless the lp. The lyrical attack brought forth addresses their take on how to maintain top quality in the Hip Hop era. A similar approach was taken by Tribel in W.A.R.. Kid-Co, Black Ash and Ablivion got a fine piano riff to bounce to for their joint. Syllable stretching and tricky word combinations made this a standout piece.

The Weight contains some old and some new tracks for all to inject into their Hip Hop vein. Since these cats aren’t affixed to any one MC at this time, they dropped some musical flavor on their guest that brought out the best of their abilities. Mos Def and Talib sound real phat on ‘Hard Margin.’ They are all over the airwaves these days but you probably won’t hear this one cracking ohms. You as the listener to The Weight have to spread the word. You read what I feel from El Da Sensei and Craig G. These cats are not to be swept under the rug just yet. Hell, I didn’t even speak on that Lootpack joint, ‘The Cypher.’ I’m not into the convincing business though. You’ll just have to trust the elements when I say, “Simple is often the best angle.” Madlib and Wildchild do what should be done by other up and comings. Go back and let that ’86 simplicity of delivery flow thru ya for a lil’ bit before you jump into the booth. You don’t always have to be super abstract. Simon Gilbert and Julian Baker drop heavy bass, sample free Hip Hop in full stride for the masses. Go out there cop this piece and marinate a bit.