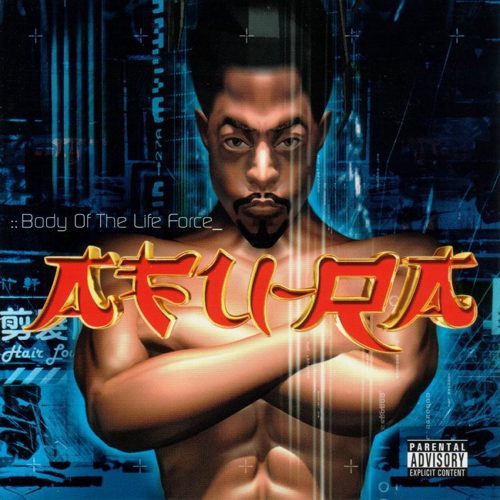 Afu-Ra :: Body of the Life Force

One of my friends threw on the “D&D Soundclash” 12″ one day and I was like, “This beat is sick… who is this?” and he was like “Afu-Ra” and I was like “word” and then promptly forgot about it. I saw the single a few days later at my college station and thought, “hmm dope beat,” so I played it and once again, I forgot about it. This pattern continued after I put on the “Whirlwind Thru Cities” 12″ – I liked the beat, but absolutely ignored the lyrics without thinking about it. “Mic Stance” too. Three for three on dope beats. So when I got the opportunity to review “Body of the Life Force” I expected dope beats and, well, I didn’t really realize I hadn’t paid attention to the lyrics to any of the singles, so I just kinda figured he’d spit fire at least on par with his beats.

Nope. I don’t know how much more there is to say even, other than that the strength of “Body” is in its beats and notable guests. To be a good emcee you have to meet at least one of a few criteria: witty lyrics (Eminem), confusing but soulful lyrics (Ghostface), a really dope flow (Xzibit) or a really notable voice (Snoop). Afu, unfortunately, is basically the opposite of all of these. I don’t think I heard a punchline on the whole joint, save the token obvious similes like on “All That” where he’s “steppin on them like they was doormats,” so wit is more or less out. Although Afu tries to reach Wu status with some vague affiliations, his verses next to Masta Killa’s on “Mortal Kombat” and GZA’s on “Bigacts Littleacts” pale in comparison. (Afu: “cerebral cortex is obsolete/you’ll die if you try to test me…” Masta: “it’s the heart/one blood cell/featuring masta kill…”) Afu’s cadence is nothing special and his voice is forgettable at best, if not annoying. This explains why I didn’t really remember hearing him spit on anything: there was no reason to remember. On occasion, he stumbles upon something interesting and lays down a tight verse, most notably on the introspective “Self Mastery,” which comes off a bit like “B.I.B.L.E.” But the shameless commerciality of the obvious latin song “Caliente” (featuring wack-ass R&B hooks by some chick named Rasheeda) and interludes of questionable purpose easily undo all the good.

This isn’t to say there aren’t good things about this album, Afu just has nothing to do with them. “Mortal Kombat,” for example, has tight lines from Masta Killa and a decent beat by DJ Roach. The other Wu collab, the True Master-laced “Bigacts Littleacts,” has a sub-standard but still pretty tight verse by GZA. And, since M.O.P. has two emcees and there’s only one Afu, “Warfare” is probably the best joint here.

The best thing about “Body of the Life Force” is the beats, which is good for an emcee who you can pretty much ignore most of the time. The beats are all good work by solid producers, plus some new shit from smaller names. Primo comes through as always four times over, “Defeat” being his best here. Da Beatminerz come through with some well-known goodness on “D&D Soundclash” even if Tek and Steele’s performances are questionable. The real stars here are Mike Rone and DJ Roach, both who come through a few times with some sickness. Roach especially does well – the Primo influence in his beats is nice, but not enough to really be biting.

Beats do not make an album though. This album makes me want to listen to the Roots “Ain’t Sayin Nothin New” because it reminds me of Afu. Well, except he just ain’t saying nothin – new or old. I don’t outright hate him, I think he has potential, but I just couldn’t find anything remotely interesting or even notable in his lyrics. As with most rappers these days, Afu needs to learn that you can’t hold an album down just because your lyrics rhyme and you know people. So I’m gonna go listen to “Project Chick” because at least there’s a purpose to it even if the beat makes me want to punch a hole in the wall.