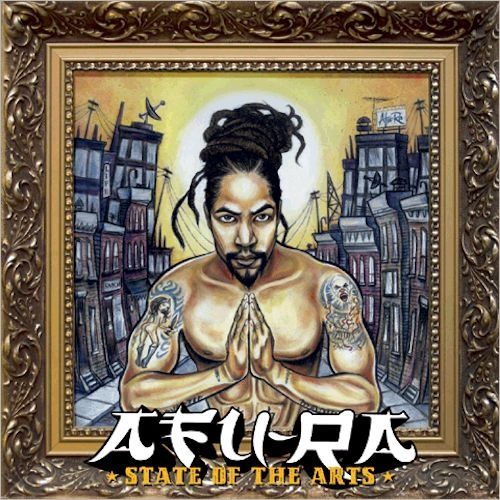 Afu-Ra :: State of the Arts

Quick – name five hit singles by Afu-Ra. The clock is ticking, let’s see how many you can come up with. “Whirlwind Thru Cities” – okay that’s one. “Big Acts Little Acts” – two down. C’mon, time’s running out, you still have three more to go. “Trilogy of Terror?” Well technically that’s a B-Side, but we’ll count it. Three… two… one… BZZZZZT! Sorry, time’s up. You don’t get the grand prize of a record release contract and national distribution, but thanks for playing our game.

Actually if you’re Afu-Ra, you don’t have to win at this game to be considered a player. While he may not be a big name in hip-hop crossover like Jay-Z and Will Smith, and he may not be as big in the underground as Lyrics Born and Canibus, Afu-Ra definitely holds down the respect from those who are in the know. While he was initially perceived as little more than Jeru the Damaja’s sidekick after guest appearances on his first two albums, Ra would eventually carve out his own niche with two solo albums of his own: “Body of the Life Force” and “Life Force Radio.” Hip-Hop listeners and critics alike remained skeptical but through carefully crafted rhymes and well chosen beats he not only emerged from Jeru’s shadow but proved to be his verbal and intellectual equal. Even this reviewer had to come clean and say that “[for] quality beats and rhymes, Afu-Ra’s sophomore album would be an excellent choice.”

After a 2004 side project named “Perverted Monks” which I have to admit to completely ignoring, Afu-Ra has come back on his own again in 2005 with “State of the Arts.” The title itself has some bold implications, many of which hip-hop’s more harsh critics would be at home with. The most popular rappers on the radio and the charts today are awash in a sea of capitalistic excess, and a public with an insatiable appetite to live vicariously through their image no matter how real or fictional are the ones who put them on top. In Afu-Ra’s mind, the state of the hip-hop arts is failing as a result, with substance and meaning being overwhelmed by the shallow and superficial. That’s not to say a little bling is all that bad – rappers have been bragging about their status in wealth and women since Spoonie Gee was the “Godfather of Rap.” There is such a thing as too much of a good thing though, and the new 21st century “God of Rap” is back to provide some balance:

“Fu came in the game was spittin flames yo
I do this for my people whose minds in them chains yo
So everybody that’s ready to roll
Get ready to eat, because I’m cookin on this track yo”

A funky beat by Eric Weis makes this song type nice. In fact beats are a constant source of strength for Afu-Ra throughout the album. Joe Roach blends a pounding boom bap with a RZA-esque soul sample on “Pusha.” Speaking of Wu-family, Masta Killa drops in on the Bronze Nazareth produced “Livin Like Dat” to form a phenomenal lyrical tag team over some heavy drums and symphonic strings. “Why Cry” is a smoothed out DJ Kemo joint with a Carribean twist accented by the chatta of guest artist Gentleman. If the skeptical among the readership are wondering where the BIG NAME producers are fear not – DJ Premier is here to make sure that Afu-Ra stays “Sucka Free”:

“Rap stack spectacular with the vernacular
Stealth bomber killing spree, they call me Blackula
Step back, get your neck fractured by the rapture
Get choked out to the beat by the manufacturer
And I ain’t mean to laugh at ya, I’m just here to mash ya
like potatoes flush your fuckin flow down the drain yo
Let’s get it on, let’s get it gully, get it ugly
East New York niggaz, we get it muddy”

There’s plenty for the hardcore hip-hop heads to like on “State of the Arts.” The pulsing blaxploitation boom bap of “Dynamite,” the slick shuffling beat and lyrical dexterity of “Poisonous Taoist,” the guitar rock attack of “Rumble” and more. Afu-Ra does not get a free pass straight to the bonus round though, as he had a few misses along the way which held him back. While it’s trendy in today’s hip-hop to accentuate a Carribean background, it does start to become a little irritating during the album’s second half; not as bad as hearing Foxy Brown affect a Trinidadian accent for an entire album but not good either. Some of the tracks come across as directionless filler, with neither a good beat to inspire Afu-Ra or exceptional lyrics on his part to carry them through. “Prankster” and “Only U” definitely fall into this category, the latter sounding suspiciously like a poor attempt by Ra to get jiggy. And for some unexplainable reason Afu-Ra’s vocal tone seems at times to have lost that gritty edge he had on “Life Force Radio.” Either he has mellowed with age over the last three years, or this is the real voice of Ra and as listeners we should get used to it. Regardless while not the standout album his sophomore release was, “State of the Arts” is a strong enough album to find Afu-Ra once again in the win column.