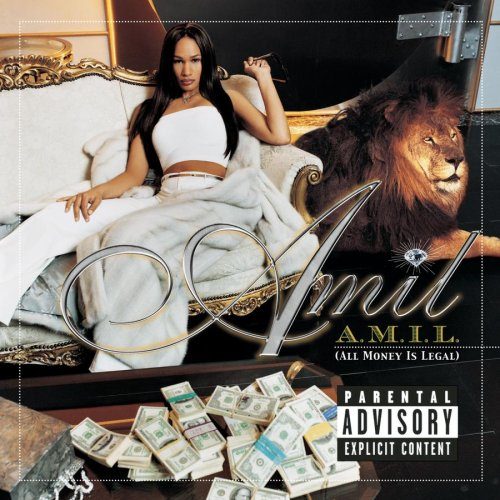 Amil :: All Money Is Legal

I know it’s cheap to mock an artist’s own bio from their press kit but when I saw Amil’s I felt compelled to speak. The first sentence reads “Faced with an industry that regularly spits out Next Big Things, it’s sometimes tough to figure out who the truly skilled are.”

No, it’s not. If they are the opposite of Amil, they are truly skilled. She is not. Ms. All Money Is Legal makes it twice as hard for legitimate female MC’s like Bahamadia and Apani B. Fly Emcee to get respect just by being so shamelessly shallow and completely lacking in talent. To be completely blunt, listening to this album makes you wonder how much dick she sucked just to get a record deal. Her helium filled and chalky sounding vocals might pass as sultry with some folks but I get a better erection from Lauryn Hill singing OR rapping. Why then does Amil have her legs spread open on the front cover, with her eyes narrowed in a come-hither slant as she sits in front of a pile of money? I guess she’s saying that the pussy was good enough for her to get paid, cause the raps won’t do it.

There’s probably only two or three songs on this album you’ll want to hear. “4 Da Fam” is one of them. Ty Fyffe provides one of the hottest beats heard in rap last year, and since three-fourths of the rappers are Jay-Z, Beanie Sigel, and Memphis Bleek this cut is a sure fire winner. Only Amil’s brief and chickenheaded verse holds down this cut.

“I get 40 G’s a feature now
Hold Franklins like Aretha now
In the SL two-seater now
And I’m, in, nothing but dia..monds
I’m the illest female that you heard thus far”

Sorry Amil, only if “ill” is synonymous with the feeling in my stomach every time I hear you flow. This cluck is basically only saved by the guest appearances on her album. Jay-Z rocks the songs “Heard it All” and “That’s Right” while singing assistance is provided by Beyonce of Destiny’s Child on “I Got That” and Carl Thomas on “Quarrels.” I try to imagine she’s not rapping when I listen to these songs but I can’t help feel irony on the latter track when she says “It was always somethin bout you that, made my skin crawl.” I doubt she knew she meant herself.

Honestly, I can’t understand what Jay-Z and Damon Dash are thinking. Beanie Sigel is decent when he’s not trying too hard to be a thug, and Memphis Bleek continues to show improvement as an MC, but Amil clearly betrays any strength the label has by going beyond mediocre into straight up awful. The sing-song of “Girlfriend” would be bad enough, but the cheesy uh-uh ah-ah uhh-ahh beat makes it even worse – and this is one of the better tracks. Please, skip this album. If it weren’t for Jay-Z’s cameo verses, especially his big pimpin rap in “4 Da Fam,” I’d completely regret this purchase. In the title track she says “Amil-lion, doper than her-on” but you couldn’t get a high with this one if it came with a free vial of crack.